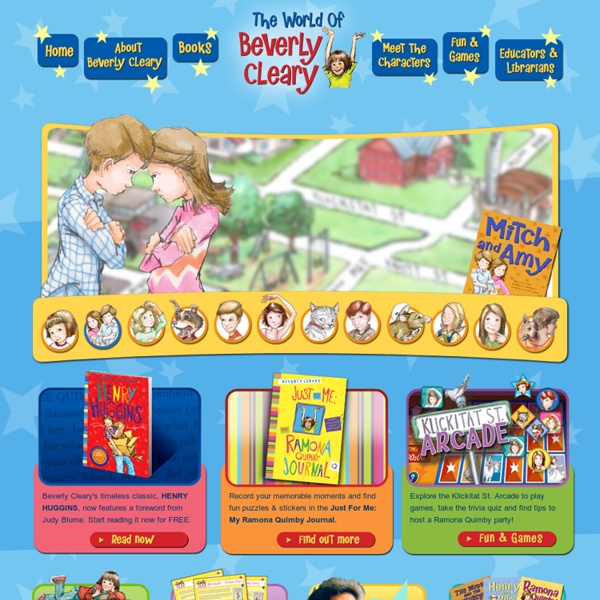 The Worlds of Anne McCaffrey This is the eulogy Alec Johnson, Anne’s eldest son, read in the funeral service held for Anne McCaffrey November 26th, 2011. For nearly 60 years it’s been my distinct honor to be Anne McCaffrey’s eldest son. And it is with equal measures of joy and sorrow that I accept the honor of addressing you now as we celebrate the life and mourn the passing of the Queen of Science Fiction. Authors and Illustrators of Children's Books Where Teachers Come First bookwizardMy Book Lists GO Instant access to reproducibles Downloadable eBooks Authors and Illustrators Biographies, interviews, author and study resources for children's book authors and illustrators

Mem Fox Picture me flat on the floor in a star shape: that’s where I am. I’ve been working for many months with my website designers (massive applause for Enee Solutions) to update the site and make it as friendly and fascinating as possible. I hope you’ll love it. It will be updated every four weeks. Barnaby Volume One: 1942-1943 In 2013, Fantagraphics published Barnaby Volume One: 1942-1943, which I co-edited with Eric Reynolds. It's the first of a 5-volume series that will collect all of Barnaby in its original run (1942-1952). Daniel Clowes designed the book, and it features essays from Chris Ware, Jeet Heer, Dorothy Parker, and me. My blog has yet more information about the Biography, Crockett Johnson, Ruth Krauss, and Barnaby.

Author & Illustrator This was posted 2 days ago. It has 344 notes. some tests that Joe Schmidt and I did a few months back. Not for anything specific but they were really fun. This was posted 1 month ago. Reading Writing Rachel Rachel Hawkins was born in Virginia and raised in Alabama. This means she uses words like "y'all" and "fixin'" a lot, and considers anything under 60 degrees to be borderline Arctic. Before deciding to write books about kissing and fire (and sometimes kissing while on fire), Rachel taught high school English for 3 years, and is still capable of teaching you The Canterbury Tales if you're into that kind of thing. She is married to a geologist, which means that they have incredibly strange dinner conversations ("So today at work, I wrote a chapter where killer fog, like, ATE PEOPLE."

Jason Fry I’m the author of The Jupiter Pirates space-fantasy saga for young adults, published by HarperCollins. The series begins with The Jupiter Pirates: Hunt for the Hydra, then continues with Curse of the Iris. The third novel, The Rise of Earth, is on the way … with more to come. The Jupiter Pirates is part high-seas adventure and part space-age epic — a saga about a solar system on the brink of war and one family caught in the middle of it. It’s technically a middle-grade book (for ages 8 to 12) but I promise older readers will like it too. I was born on June 11, 1945 in Pittsburgh, Pennsylvania. I grew up in a family of 9 kids. At least, that is where I lived when I was young.