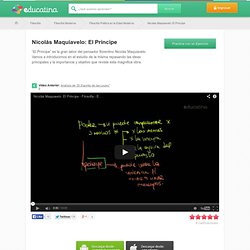 Maquiavelo en la obra planteada tenía un propósito claro: Unificar Italia. Renaissance Table Manners. How should one behave at parties or dinners, in the company of friends and relatives? 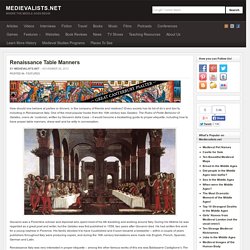 Every society has its list of do’s and don’ts, including in Renaissance Italy. One of the most popular books from the 16th century was Galateo: The Rules of Polite Behavior (Il Galateo, overo de ‘costume), written by Giovanni della Casa – it would become a bestselling guide to proper etiquette, including how to have proper table manners, dress well and be witty in conversation. Giovanni was a Florentine scholar and diplomat who spent most of his life travelling and working around Italy. During his lifetime he was regarded as a great poet and writer, but the Galateo was first published in 1558, two years after Giovanni died. He had written this work for a young nephew in Florence. The Duomo. The Basilica di Santa Maria del Fiore (Saint Mary of the Flower), nicknamed the Duomo after the enormous octagonal dome on its east end, is the cathedral of Florence, Italy, and, arguably, the birthplace of the Renaissance. 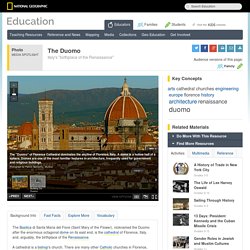 A cathedral is a bishop's church. The Pietà. Below, a video by Beth Harris and Steven Zucker - standing in front of the Pietà, in St. 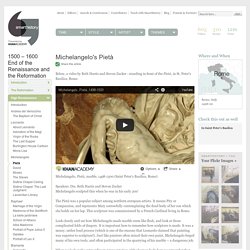 Peter's Basilica, Rome. Michelangelo, Pietà, marble, 1498-1500 (Saint Peter's Basilica, Rome) Speakers: Drs. Beth Harris and Steven Zucker Michelangelo sculpted this when he was in his early 20s! The Pietà was a popular subject among northern european artists. Look closely and see how Michelangelo made marble seem like flesh, and look at those complicated folds of drapery. Belgian physician. Raphael (1483-1520) A leading figure of Italian High Renaissance classicism, Raphael is best known for his "Madonnas," including the Sistine Madonna, and for his large figure compositions in the Palace of the Vatican in Rome. 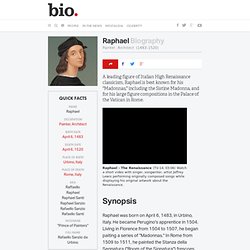 Synopsis Raphael was born on April 6, 1483, in Urbino, Italy. He became Perugino's apprentice in 1504. Leonardo da Vinci (1452-1519) Renaissance (European history) Donatello (1386-1466) Italian sculptor Donatello was the greatest Florentine sculptor before Michelangelo (1475–1564) and was the most influential individual artist of the 15th century in Italy. 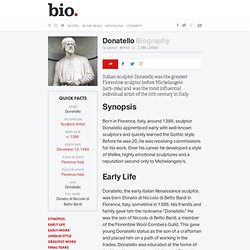 Synopsis Born in Florence, Italy, around 1386, sculptor Donatello apprenticed early with well-known sculptors and quickly learned the Gothic style. Before he was 20, he was receiving commissions for his work. Over his career he developed a style of lifelike, highly emotional sculptures and a reputation second only to Michelangelo's. Early Life. Florence's Baptistry. Michelangelo (1475-1564) Michelangelo is widely regarded as the most famous artist of the Italian Renaissance. 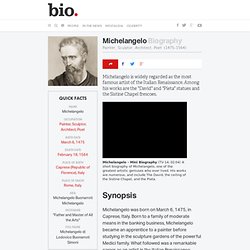 Among his works are the "David" and "Pieta" statues and the Sistine Chapel frescoes. Synopsis. Florence, Italy. As any other ancient city, Florence has a lot to offer to tourists. 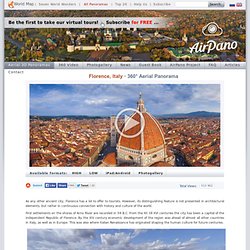 However, its distinguishing feature is not presented in architectural elements, but rather in continuous connection with history and culture of the world. First settlements on the shores of Arno River are recorded in 59 B.C. From the XII till XVI centuries the city has been a capital of the independent Republic of Florence. By the XIV century economic development of the region was ahead of almost all other countries in Italy, as well as in Europe.

This was also where Italian Renaissance has originated shaping the human culture for future centuries. Watteau and His Circle. This website is intended to be a vehicle for the dissemination of my research on Antoine Watteau and his contemporaries. 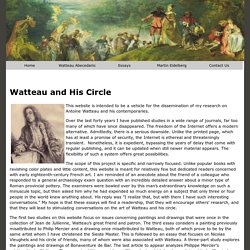 Over the last forty years I have published studies in a wide range of journals, far too many of which have since disappeared. The freedom of the Internet offers a modern alternative. Admittedly, there is a serious downside. Unlike the printed page, which has at least a promise of security, the Internet is ethereal and threateningly transient. Nonetheless, it is expedient, bypassing the years of delay that come with regular publishing, and it can be updated when still newer material appears. The scope of this project is specific and narrowly focused.

The first two studies on this website focus on issues concerning paintings and drawings that were once in the collection of Jean de Jullienne, Watteau’s great friend and patron. Martin Eidelberg New York.