Chicken in the Pot. First, heat 1 tablespoon of the oil in the casserole, then fry the lardons or pancetta a little with the shallots or button onions. 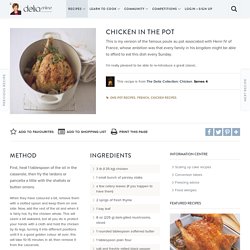 When they have coloured a bit, remove them with a slotted spoon and keep them on one side. Now, add the rest of the oil and when it is fairly hot, fry the chicken whole. This will seem a bit awkward, but all you do is protect your hands with a cloth and hold the chicken by its legs, turning it into different positions until it is a good golden colour all over; this will take 10-15 minutes in all, then remove it from the casserole.

Next, fry the carrots, turnips and crushed garlic for about 5 minutes, stirring them all around so that they brown slightly. Mixed Smoked Fish Kedgeree with a Creme Fraiche and Parsley Sauce. Start off by boiling the eggs: the best way to achieve slightly creamy yolks is to place the eggs in cold water, bring them up to the boil, then boil them for 6 minutes. 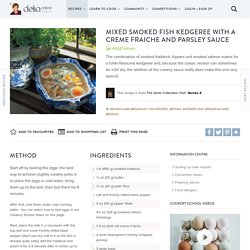 After that, cool them under cold running water. You can watch how to boil eggs in our Cookery School Video on this page. Next, place the milk in a saucepan with the bay leaf and some freshly milled black pepper (don't put any salt in it as the fish is already quite salty), add the haddock and poach it for 2-3 minutes after it comes up to simmering point. Baked Lamb with Rosemary, with Redcurrant and Mint Sauce. First of all, crush the garlic and sea salt together to a purée, using a pestle and mortar, then add the oil, chopped rosemary and a good seasoning of pepper and mix well. 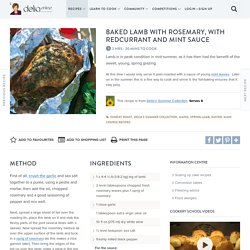 Next, spread a large sheet of foil over the roasting tin, place the lamb on it and stab the fleshy parts of the joint several times with a skewer. Now spread the rosemary mixture all over the upper surface of the lamb and tuck in a sprig of rosemary (as this makes a nice garnish later). Caribbean Chicken with Salsa. Seared Salmon Fillets with Puy Lentil Salsa. First make the salsa: strip the leaves off the coriander stalks and reserve them for later. 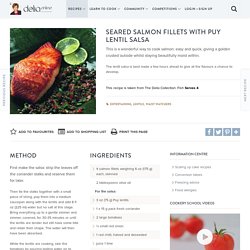 Then tie the stalks together with a small piece of string, pop them into a medium saucepan along with the lentils and add 8 fl oz (225 ml) water but no salt at this stage. Bring everything up to a gentle simmer and simmer, covered, for 30-35 minutes or until the lentils are tender but still have some bite and retain their shape. The water will then have been absorbed. While the lentils are cooking, skin the tomatoes by pouring boiling water on to them. Cauliflower with Two Cheeses and Creme Fraiche. Chicken and Leek Pot Pie.

First, pour the cider into a medium saucepan, along with the carrots, bay leaf, sprig of thyme and some salt and freshly milled black pepper. 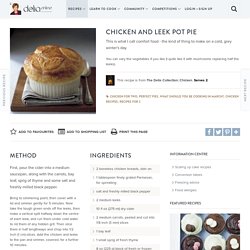 Bring to simmering point, then cover with a lid and simmer gently for 5 minutes. Now take the tough green ends off the leeks, then make a vertical split halfway down the centre of each leek, and run them under cold water to rid them of any hidden grit. Then slice them in half lengthways and chop into 1/2 inch (1 cm) slices. Easy Omelette Arnold Bennett. To begin with, measure the crème fraîche into a medium saucepan and bring to a gentle simmer. 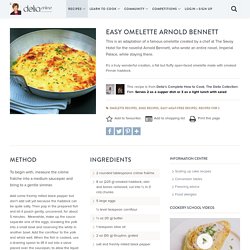 Add some freshly milled black pepper but don't add salt yet because the haddock can be quite salty. Then pop in the prepared fish and let it poach gently, uncovered, for about 5 minutes. Marinated Chicken with Honey and Ginger served with Mango and Sultana Salsa. Feta Cheese, Spinach and Pine Nut Galettes. Make the pastry and chill it for 30 minutes in the fridge. 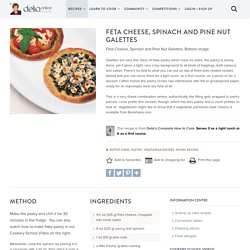 You can also watch how to make flaky pastry in our Cookery School Video on the right. Meanwhile, cook the spinach by placing it in a saucepan with a lid on, then place it over a medium heat. Just let it collapse down into its own juices, timing it for 2-3 minutes and turning it over halfway through. Drain the spinach in a colander, pressing it with a saucer to extract every last bit of juice, then season with a little nutmeg. Next roll out the pastry on a lightly floured surface to ⅛ inch (3 mm), cut out six 6 inch (15 cm) discs and place these on the baking sheets.

Goulash Soup with Dumplings. Begin by trimming and cutting the meat into ½ inch (1 cm) pieces. 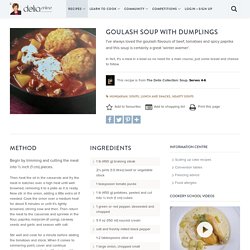 Then heat the oil in the casserole and fry the meat in batches over a high heat until well browned, removing it to a plate as it is ready. Now stir in the onion, adding a little extra oil if needed. Cook the onion over a medium heat for about 5 minutes or until it's lightly browned, stirring now and then. Moussaka with Roasted Aubergines and Ricotta. First of all you need to prepare the aubergines to get rid of their high water content and concentrate their flavour. 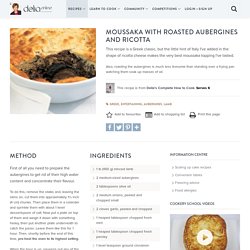 To do this, remove the stalks and, leaving the skins on, cut them into approximately 1½ inch (4 cm) chunks. Then place them in a colander and sprinkle them with about 1 level dessertspoon of salt. Now put a plate on top of them and weigh it down with something heavy, then put another plate underneath to catch the juices. Leave them like this for 1 hour. Then, shortly before the end of this time, pre-heat the oven to its highest setting. Souffled Macaroni Cheese. Begin by having all your ingredients weighed out and the cheeses grated. 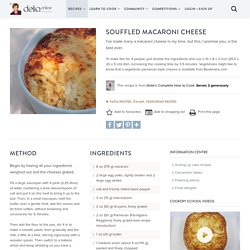 Fill a large saucepan with 4 pints (2.25 litres) of water containing a level dessertspoon of salt and put it on the heat to bring it up to the boil. Then, in a small saucepan, melt the butter over a gentle heat, add the onions and let them soften, without browning and uncovered, for 5 minutes. Then add the flour to the pan, stir it in to make a smooth paste, then gradually add the milk, a little at a time, stirring vigorously with a wooden spoon.

Then switch to a balloon whisk and keep whisking so you have a smooth sauce. Then add some salt and freshly milled black pepper, as well as the nutmeg, and leave the sauce to cook gently for 5 minutes. How to roast chicken. Delia Online. Potato Bread with Goats' Cheese and Thyme. Omelette Savoyard. Leek, Onion and Potato Soup. Begin by trimming the leeks, discarding the tough outer layer. Now split them in half lengthways and slice them quite finely, then wash them thoroughly in two or three changes of water. Drain well. In a large, thick-based saucepan, gently melt the butter, then add the leeks, onions and potatoes, stirring them all round with a wooden spoon so they get a nice coating of butter. Classic Risotto Milanese. First of all crush the saffron to a powder with a pestle and mortar.

Next melt 60g of the butter in a heavy-based saucepan, add the saffron and allow 1 minute for the heat to draw out the flavour. Then add the chopped onion and cook, over a low heat, uncovered for about 10 minutes until softened. Meanwhile pour the wine into the mortar so it can soak up the remnants of saffron powder. Gratin of Tiger Prawns with Chilli and Cheese. You need to deal with the prawns in advance by rinsing them, then leaving them in a colander set over a bowl for about an hour to defrost. Spanish Chicken with Butter Beans, Chorizo and Tomatoes. First of all, begin by cooking the butter beans. Place the soaked and drained beans in a pan with the sprigs of thyme and 1 of the bay leaves and cover with water. Bring to simmering point and then cover with a lid and simmer the beans for 45 minutes to 1 hour or until the beans are tender.

Meanwhile, prepare the vegetables. Begin by peeling the onion and carrots and finely chopping them. Next, take the tough green ends off the leek, then make a vertical split halfway down the centre and run it under cold water to rid it of any hidden grit. Delia's steak and kidney pudding. Baked Fish Fillets with Mushroom Stuffing. Stilton Souffle Omelette. First pre-heat the grill, then put the frying pan on to a medium heat. Whisk the egg whites to soft peaks and leave them on one side while you beat the egg yolks in a separate bowl and season them well. Tuscan White Bean Soup with Frizzled Shallots and Pancetta.

First of all you need to soak the beans in twice their volume of cold water overnight or, failing that, use the same amount of cold water, bring them up to the boil, boil for 10 minutes and leave them to soak for 2 hours. Venison Braised in Blackfriars Porter and Port with Pickled Walnuts. Quattro Formaggio (Four Cheese) Pizza. Melted Cheese Frittata with Four Kinds of Mushroom. First of all chop the mushrooms into roughly 1 inch (2.5 cm) chunks – it's going to look an enormous quantity at this stage, but they will lose approximately half their volume in the initial cooking. Thai Salmon Filo Parcels. Souffle Omelette with Swiss Gruyere Cheese and Parmesan. First separate the eggs (click here to watch How to Separate Eggs). Goulash Soup with Dumplings. Luxury Fish Pie with Rosti Caper Topping. First of all, prepare the potatoes by scrubbing them, but leaving the skins on.

As they all have to cook at the same time, if there are any larger ones cut them in half. Chinese Stir-fried Chicken with Shiitake Mushrooms and Purple Sprouting Broccoli. Curried Parsnip and Apple Soup with Parsnip Crisps. Spanish Braised Pork with Potatoes and Olives. Butter Bean, Bacon and Parsley Soup. Cauliflower with Two Cheeses and Creme Fraiche. Pork Chops Braised in Milk. Salmon in Champagne Sauce. Venison Sausages Braised in White Wine with Caramelised Chestnuts. Roast Gammon with Blackened Crackling with Citrus, Rum and Raisin Sauce. Corned-beef Hash with Fried Eggs. Curried Parsnip and Apple Soup with Parsnip Crisps. Pork Sausages Braised in Cider with Apples and Juniper. Shiitake Broth with Sesame Toast. Oven-roasted Red Potatoes with Red Onion and Red Wine Vinegar.