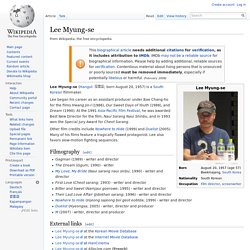 Lee began his career as an assistant producer under Bae Chang-ho for the films Hwang Jin-I (1986), Our Sweet Days of Youth (1988), and Dream (1990). Kim Ki-young. Kim Jee-woon. Kim Jee-woon (born May 27, 1964) is a South Korean film director and screenwriter.[1] Kim Jee-woon has a history of successfully tackling a wide range of film genres, garnering a cult following among fans of Asian cinema.[2] §Career[edit] §Summary[edit] Kim started out directing theater, but has worked with increasing levels of success in cinema, showing accomplished acting and a detailed stylization in his films.[3] Kim also pays careful attention to the release of his films on DVD and goes to greater than usual lengths to package them with extensive documentary materials and revealing commentary tracks.[4] Kim is growing substantially both as a director and a visual stylist as demonstrated by two of his most recent films A Tale of Two Sisters and A Bittersweet Life both of which were received as critical and commercial successes.[4] 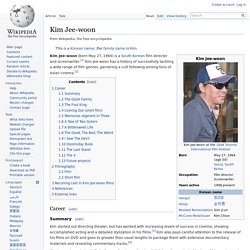 Kim Ki-duk. Life and career[edit] Controversy[edit] The British Board of Film Classification delayed the release of Kim Ki-duk's The Isle (2000) in the United Kingdom because of instances of animal cruelty in the film. 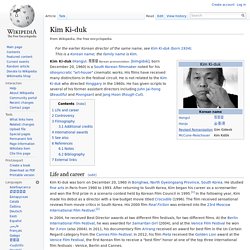 Concerning scenes in which a frog is skinned alive and fish are mutilated, the director stated, "We cooked all the fish we used in the film and ate them, expressing our appreciation. I've done a lot of cruelty on animals in my films. And I will have a guilty conscience for the rest of my life To a U.S. interviewer who suggested that scenes such as these are "very disturbing and [seem] to place an obstacle to the films [sic] reception, or... distribution, to other countries", Kim said, "Yes, I did worry about that fact.

Peter Weir. §Early life and career[edit] Weir was born in Sydney, the son of Peggy (née Barnsley) and Lindsay Weir, a real estate agent.[1] Weir attended The Scots College and Vaucluse Boys' High School before studying arts and law at the University of Sydney. 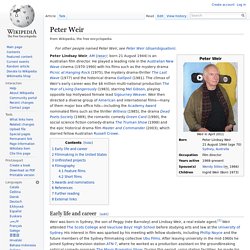 His interest in film was sparked by his meeting with fellow students, including Phillip Noyce and the future members of the Sydney filmmaking collective Ubu Films. After leaving university in the mid-1960s he joined Sydney television station ATN-7, where he worked as a production assistant on the groundbreaking satirical comedy program The Mavis Bramston Show. During this period, using station facilities, he made his first two experimental short films, Count Vim's Last Exercise and The Life and Flight of Reverend Buckshotte. On 14 June 1982, Weir was appointed a Member of the Order of Australia (AM) for his service to the film industry.[4] He resides in Sydney with his wife Wendy Stites. 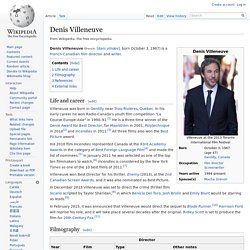 §Life and career[edit] His 2010 film Incendies represented Canada at the 83rd Academy Awards in the category of Best Foreign Language Film[4] and made the list of nominees.[5] In January 2011 he was selected as one of the top ten filmmakers to watch.[6] Incendies is considered by the New York Times as one of the 10 best films of 2011.[7] In February 2015, it was announced that Villeneuve would direct the sequel to Blade Runner.[10] Harrison Ford will reprise his role, and it will take place several decades after the original.

Ridley Scott is set to produce the film for 20th Century Fox.[11] John Sayles. Rob Reiner. This article is about the actor and director. 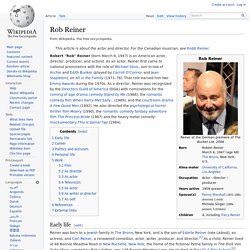 For the Canadian musician, see Robb Reiner. §Early life[edit] Reiner was born to a Jewish family in The Bronx, New York, and is the son of Estelle Reiner (née Lebost), an actress, and Carl Reiner, a renowned comedian, actor, writer, producer, and director.[1] As a child, Reiner lived at 48 Bonnie Meadow Road in New Rochelle, New York; the home of the fictional Petrie family in The Dick Van Dyke Show, created by Rob's father, was 148 Bonnie Meadow Lane. Zhang Yimou. Zhang has won numerous awards and recognitions, with Best Foreign Film nominations for Ju Dou in 1990 and Raise the Red Lantern in 1991, Silver Lion and Golden Lion prizes at the Venice Film Festival, Grand Jury Prize at the Cannes Film Festival, and the Golden Bear at the Berlin International Film Festival.[5] In 1993, he was a member of the jury at the 43rd Berlin International Film Festival.[6] Zhang directed the opening and closing ceremonies of the 2008 Beijing Summer Olympic Games, which received considerable international acclaim. 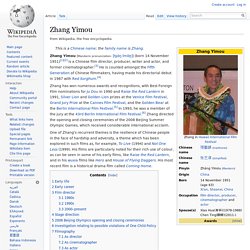 §Early life[edit] Zhang was born in Xi'an, the capital of Shaanxi province. Zhang's father, a dermatologist, had been an officer in the National Revolutionary Army under Chiang Kai-shek during the Chinese Civil War, an uncle, and an elder brother had followed the Nationalist forces to Taiwan after their 1949 defeat. Michele Soavi. Michele Soavi, sometimes known as Michael Soavi (born 3 July 1957)[1] is an Italian filmmaker. 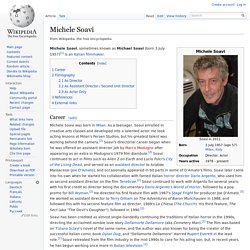