How much does a wedding really cost and who should pay? On the day of a wedding, arguably no-one apart from the happy couple is under more pressure than the father-of-the bride. 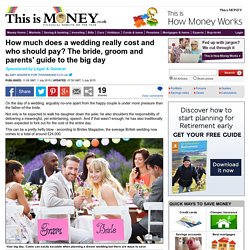 Not only is he expected to walk his daughter down the aisle, he also shoulders the responsibility of delivering a meaningful, yet entertaining, speech. And if that wasn't enough, he has also traditionally been expected to fork out for the cost of the entire day. This can be a pretty hefty blow - according to Brides Magazine, the average British wedding now comes to a total of around £24,000.

Your big day: Costs can easily escalate when planning a dream wedding but there are ways to save However, statistics suggest that the bride's father might now be off the hook. A recent study of more than 2,000 married women by jewellers Beaverbrooks found that only 18 per cent of brides' parents paid for a wedding in its entirety. But this has not put paid to questions of who pays what, how much should parents contribute and what the cost of the whole thing will add up to.

Poll Flowers. What economic crisis? Wedding bill rises to £22,000 (and bank of mum and dad foots much of the bill) Average cost has risen by more than £7,000 in a decadeNumber of guests has fallen by seven per cent from 101 to 94More than half of couples admit they share cost of big day with parents By John Stevens for the Daily Mail Published: 23:26 GMT, 27 March 2013 | Updated: 11:08 GMT, 28 March 2013 Counting the cost: The average wedding bill is now almost £22,000 (file photo) Any groom will know that there are some things you just don’t mention to a stressed-out bride. 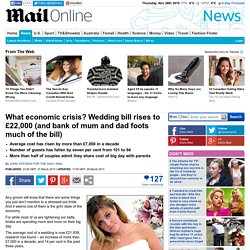 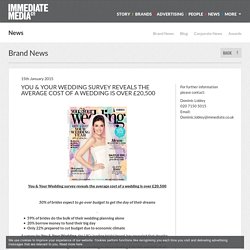 The You & Your Wedding 21st Century Bride survey of over 2,300 brides explored wedding trends across the UK revealed that 50% of brides expect to go over budget to get the wedding they want; whilst 51% are willing to make cutbacks in other areas of their spending to pay for it, 20% of brides would borrow money rather than compromise on their big day plans. Ends Who is playing? Average Wedding Cost Budget Breakdown. Having a clear idea of your budget is essential. 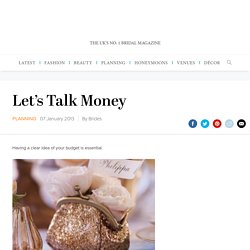 Mel Yates Sit down together, or with your parents if they're going to contribute, and work out what you can afford to spend. Write down the estimated costs in a budget planner. As a guide, here are the average amounts that Brides readers spend. (Of course, it's up to you where you decide to save or splurge!) The White Dress That Changed Wedding History Forever. Wedding traditions may have relaxed in recent decades, but one thing stays the same: the bride wears white. 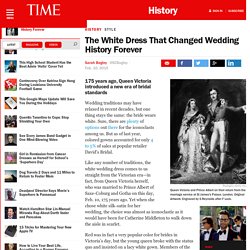 Sure, there are plenty of options out there for the iconoclasts among us. But as of last year, colored gowns accounted for only 4 to 5% of sales at popular retailer David’s Bridal. Each Year UK Weddings are Worth £10 billion : hitched W.I.F.E.