JBM.Specificity.Luxmanagement.JNK_.VB_.pdf. Fake it 'Til You Make It; Designer Bags Without the Fat Tag  I first fell in love with Thursday Friday when I was obsessing about buying a Chanel bag that I couldn't, and still can't afford. 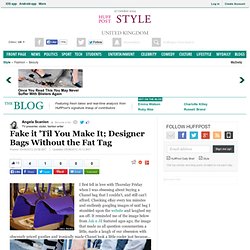 Checking eBay every ten minutes and endlessly googling images of said bag I stumbled upon the website and laughed my ass off. It reminded me of the image below from Jak n Jil featured ages ago; the image that made us all question consumerism a little, made a laugh of our obsession with obscenely priced goodies and ironically made Chanel look a little cooler just because... The IT bag is over or so we're told but while many women are still spending on their leathers others are poking fun at the notion of such a practical item as the handbag being held up as a status symbol. If you fall into the latter school of thought but want to give a wink and a nod to your fashion counterparts then Thursday Friday is a cheeky way to do it..

What do you think?? Louis Vuitton Raised Most Non-Leather Handbag Prices, HSBC Says - The Business of Fashion. PARIS, France — Louis Vuitton, which last month raised prices by an average 12 percent in Japan, has imposed similar increases on non-leather handbags in most of its main markets since the start of the year, according to HSBC. 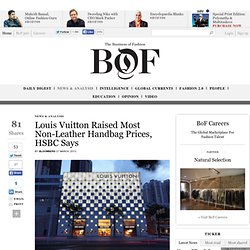 The trunk maker owned by Paris-based LVMH Moet Hennessy Louis Vuitton SA lifted prices on bags such as the Speedy and NeverFull by about 10 percent in the euro region, Antoine Belge, an HSBC analyst, said today in a note to clients. Vuitton raised prices by at least 10 percent in the U.K. and U.S., and by 5 percent to 10 percent in Asian markets including China, Hong Kong, Taiwan and Singapore, the analyst wrote. The euro’s strength against some currencies may lead LVMH to charge more, Chairman and Chief Executive Officer Bernard Arnault said Jan. 31. 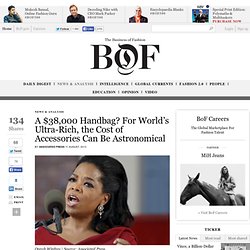 For most people, it’s unthinkable. But for the richest sliver of the global population, it’s a realistic option — and buyers aren’t short of choices. In the upscale boutiques of Singapore, New York or Zurich — where Oprah Winfrey claims a sales clerk refused to show her a $38,000 bag — purses priced in the four figures are common. In fact, they’re so common that a higher level of luxury exists to set the super-rich apart from the merely affluent. Luxury Goods Retailing - International - August 2014. Welcome to Forbes. Research and Markets Adds Report Global Handbags Market Report 2013 Edition ProQuest. Burberry versus The Chavs. For a top luxury fashion company like Burberry it is the ultimate nightmare. 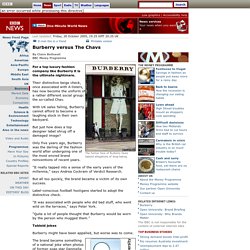 Their distinctive beige check, once associated with A-listers, has now become the uniform of a rather different social group: the so-called Chav. With UK sales falling, Burberry cannot afford to become a laughing stock in their own backyard. But just how does a top designer label shrug off a damaged image?

Only five years ago, Burberry was the darling of the fashion world after undergoing one of the most envied brand reinventions of recent years. "It really tapped into a sense of the early years of the millennia," says Andrea Cockram of Verdict Research. But all too quickly, the brand became a victim of its own success. Label-conscious football hooligans started to adopt the distinctive check. "It was associated with people who did bad stuff, who went wild on the terraces," says Peter York.

"Quite a lot of people thought that Burberry would be worn by the person who mugged them. " Tabloid jokes Chavalier for sale. Can China Produce A Luxury Brand? Heterogeneous mix of 330 million consumers purchasing €217 billion in luxury goods globally, finds far-reaching new Bain & Company study - Bain & Company - About. Changing Generational Shifts and Unprecedented Fragmentation Form Rise of the ‘7 New Faces of the Global Luxury Consumer' Milan, January 14, 2014 – The number of luxury consumers worldwide has more than tripled over the past twenty years, from roughly 90 million consumers in 1995 to 330 million at the end of 2013; this according to Bain & Company, the leading advisor to the worldwide luxury goods industry, in an extensive study of 10,000 luxury consumers, conducted in collaboration with Redburn Partners, Europe's largest independent equities broker, and Millward Brown, a leading consumer research agency. 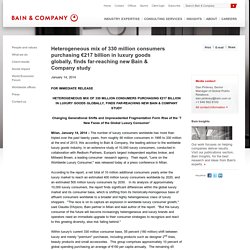