Teens Love Brandy Melville, A Fashion Brand That Sells Only One Tiny Size. NEW YORK -- "Small," reads the label dangling from the first tank top on the rack at the Brandy Melville store in SoHo. 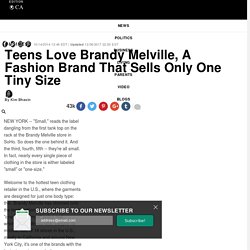 So does the one behind it. And the third, fourth, fifth -- they're all small. In fact, nearly every single piece of clothing in the store is either labeled "small" or "one-size. " Welcome to the hottest teen clothing retailer in the U.S., where the garments are designed for just one body type: thin. Brandy Melville has stormed onto the teen fashion scene with its "one-size-fits-most" policy and whimsical California vibe. Who is the Brandy Melville girl? Typical Brandy Melville girls on Instagram. "It's an exclusivity thing: Congratulations, you fit in the clothes! While teens fawn over the retailer's assortment of crop tops, halters, cardigans and more, critics say Brandy Melville has raised the stakes when it comes to fat-shaming. At Brandy Melville, nearly all the clothes are small, though a medium will pop up here and there.

Teens Love Brandy Melville, A Fashion Brand That Sells Only One Tiny Size. How Brands Can Connect With Teens Using Social Media. Every generation of teens always want to do things differently it seems. 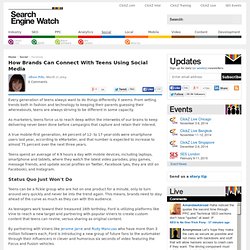 From setting trends both in fashion and technology to keeping their parents guessing their whereabouts, teens are always striving to be different in some capacity. As marketers, teens force us to reach deep within the interwebs of our brains to keep delivering never been done before campaigns that capture and retain their interest. A true mobile-first generation, 44 percent of 12- to 17-year-olds were smartphone users last year, according to eMarketer, and that number is expected to increase to almost 75 percent over the next three years.

Teens spend an average of 4.9 hours a day with mobile devices, including laptops, smartphone and tablets, where they watch the latest video parodies, play games, message friends, and update social profiles on Twitter, Facebook (yes, they are still on Facebook), and Instagram. Status Quo Just Won't Do. After Brad Pitt WEARS cartoon of him and Angelina Jolie, more celebrities' talking through t-shirts. We already knew Brad Pitt and Angelina Jolie were the cutest couple in the world, but Brad wanted to prove it (again) today and wore a doodle of him and his future wife on his t-shirt. 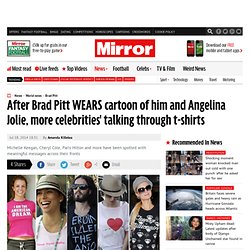 But he's not the first celebrity to make a statement on his clothing, and where better than right on the front of your top? Staying low-key and matchy-matchy in top to toe beige and a flat-cap, the 50-year-old actor was pictured as he arrived in Southern France. Clearly proud of his actress-meets-activist wife, Angelina Jolie, it's not the first time the heartthrob's worn the 'Brangelina' top. And from Kym Marsh wearing a slogan t-shirt which said it all – Drama Queen, to Orlando Bloom sharing his (former) love of Miranda with a t-shirt saying “Kerr Bloom”, there's plenty of choice. Here are some other celebs who aren't afraid to wear their heart on their tees... Made in Chelsea star Millie Mackintosh is never one to shy away from a photo opportunity. But it wasn't always so. Barcroft Splash. Content Getting Boring? 5 Ways to Bring Sexy Back.

Hot or not? Five ways to keep your brand relevant. The ever-changing competition between which brands are hot and which are not is a relentless battle. 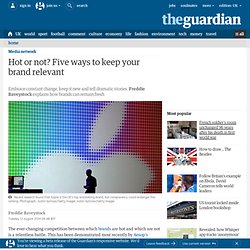 This has been demonstrated most recently by Aesop's research into the UK's top storytelling brands, where Apple was (once again) ranked as number one. Whilst this may not be a surprise – the marketing community is entirely in thrall to Apple products as well as its brand – we shouldn't forget that the Californian tech behemoth has come under fire recently for taking its eye off the ball. It seems to have developed a certain complacency that its iconic brand, one which for so long has epitomised "cool" and "beautiful", is strong enough to maintain its long-established position at the top of the league. So here are a few pointers to guide marketers in their quest to keep their eyes on the prize. 1) Embrace change Brands need to embrace change as a constant principle of the contemporary cultural and marketing mix. 2) Keep it new 3) Tell stories.