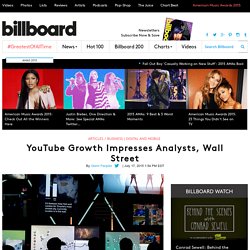 With the help of the online video service, the tech giant's revenue increased 11 percent to $17.73 billion, pushing shares up 3.1 percent to $601.78 at Thursday's close of trading. Just a few months ago, YouTube was said to be unprofitable in spite of generating $4 billion in revenue last year. But Google's earnings call made the case that YouTube is a key driver for the company's growth. CFO Ruth Porat cited "significant growth in YouTube revenues" and the benefits of TrueView, a type of video advertisement in which advertisers pay when viewers choose to watch an advertisement, not when an advertisement is viewed.

Google Revenue Up 11 Percent on Search, YouTube Growth. Why Video Marketing is About the Audience Not the Marketers. Ogilvy & Mather just published a Red Paper about “The Digital Social Contract” that will make other agencies green with envy. 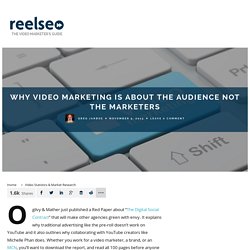 It explains why traditional advertising like the pre-roll doesn’t work on YouTube and it also outlines why collaborating with YouTube creators like Michelle Phan does. Whether you work for a video marketer, a brand, or an MCN, you’ll want to download the report, and read all 100 pages before anyone else in your organization. Then, you will be a hero for bringing this seminal document to everyone else’s attention. 5 YouTube Pre-Roll Ads That Made Viewers Take Notice. I’d like to take a quick moment to thank YouTube for the skippable pre-roll ad. 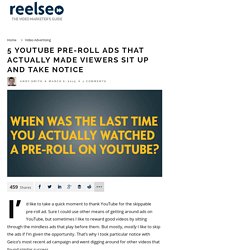 Sure I could use other means of getting around ads on YouTube, but sometimes I like to reward good videos by sitting through the mindless ads that play before them. But mostly, mostly I like to skip the ads if I’m given the opportunity. That’s why I took particular notice with Geico’s most recent ad campaign and went digging around for other videos that found similar success. If you haven’t seen it yet, Geico has a series of ads that “end” at just about the exact point where you would normally hit the skip button on YouTube, the five second mark. After that, the videos freeze frame and continue with additional action outside of the original characters. Pre-roll Ads: Drawing the Viewer in for a Good Cause. 7 Stats That Show YouTube's Power Over Youth. Younger viewers have begun to consider YouTube as their go-to viewing hub over traditional television. 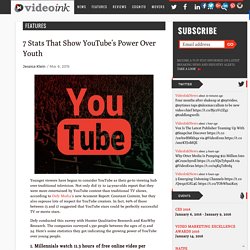 Not only did 13- to 24-year-olds report that they were more entertained by YouTube content than traditional TV shows, according to Defy Media’s new Acument Report: Constant Content, but they also espouse lots of respect for YouTube creators. In fact, 69% of those between 13 and 17 suggested that YouTube stars could be perfectly successful TV or movie stars.

Why Video Marketing is About the Audience Not the Marketers. Ogilvy & Mather just published a Red Paper about “The Digital Social Contract” that will make other agencies green with envy. 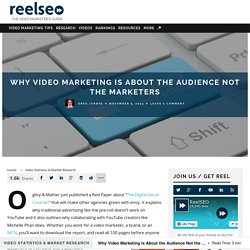 It explains why traditional advertising like the pre-roll doesn’t work on YouTube and it also outlines why collaborating with YouTube creators like Michelle Phan does. Whether you work for a video marketer, a brand, or an MCN, you’ll want to download the report, and read all 100 pages before anyone else in your organization. Then, you will be a hero for bringing this seminal document to everyone else’s attention. The paper, a collaboration between Ogilvy & Mather, and Victorious, addresses the fact that many brands and media companies are still racing to keep up with the changes in digital marketing.

7 Stats That Show YouTube's Power Over Youth. Younger viewers have begun to consider YouTube as their go-to viewing hub over traditional television. 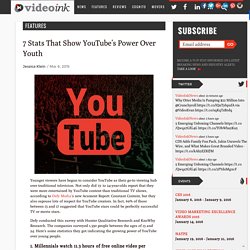 Not only did 13- to 24-year-olds report that they were more entertained by YouTube content than traditional TV shows, according to Defy Media’s new Acument Report: Constant Content, but they also espouse lots of respect for YouTube creators. In fact, 69% of those between 13 and 17 suggested that YouTube stars could be perfectly successful TV or movie stars. Defy conducted this survey with Hunter Qualitative Research and KnoWhy Research. The companies surveyed 1,350 people between the ages of 13 and 24. Acumen-2015-Infographic. New Instagram ads ‘get 17 times more clicks’- report. US furniture retailer RC Willey, the first brand to use Instagram advertising, attained a click-through rate nearly 17 times higher than average, according to new data. 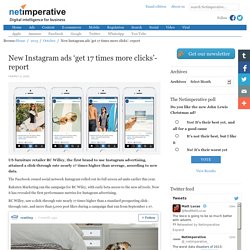 The Facebook owned social network Instagram rolled out its full screen ad units earlier this year. Rakuten Marketing ran the campaign for RC Wiley, with early beta access to the new ad tools. Now it has revealed the first performance metrics for Instagram advertising. Instagram ads are a hit among brands. Social Media Use by Age Group Over Time. Are Ad Blockers an Invasive Species or a Catalyst for Innovation? Ad blocking has been the dominant topic of conversation across digital media for the last couple of months, and we still don't seem to have tired talking about it. 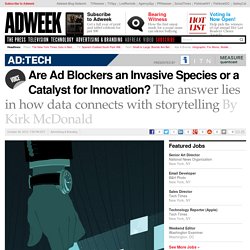 Is the emergence of ad blockers the introduction of an invasive species or the catalyst for innovation? The truth, it turns out, might not be so binary. Kirk McDonald In the early days of the Web, the rule for advertising was, "if it moves, it's interesting. " Flashy banner ads made hard-coded pages more interesting, and getting the "click" became the new standard for measuring ad effectiveness and valuable content.

Every good advertising idea that's overused results in a fatigued and frustrated user. While an advertising technology arms race can't be the long-term solution to handling the ad-blocking issue, many advertisers are trying to address it head on, with little success. Econsultancy. The hipster is dead, let's start an anti-authenticity movement. Craft is a word that used to mean something. 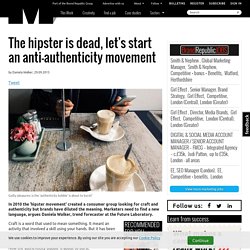 It meant an activity that involved a skill using your hands. But it has been co-opted by brands and strategists to sell us a story about authenticity, which has diluted its meaning. Now the authenticity bubble is about to burst. It is a bubble that brands, creative agencies, marketers and, yes, even trend forecasters have been living in for the past five years. More than 50% of Instagram's biggest fans hate ad increase. There is no doubt that Instagram is a phenomenon. 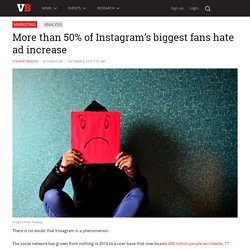 The social network has grown from nothing in 2010 to a user base that now boasts 400 million people worldwide, 77 million of whom are in the U.S. 80 million photos are shared daily on the image-centric social network, providing constant joy to those of us who love a good plane wing, hot dogs/legs paradox, or a cat wearing glasses. But something changed on September 27th, 2015 that has left a bitter taste in the mouth of many a budding Trey Ratcliff. That something was no doubt driven by Facebook’s need to monetize the network it acquired for $1 billion in 2012. The frequency of advertisements — or “sponsored images” if you prefer — seen in the average stream appeared to dramatically increase. Global Social Media Growth and Stats 2015 #Socialography.

What do you get when you put geography and social media together? Link Humans presents #Socialography. #Socialography, is a combination of geographical and social statistics from around the globe. Over the past few years, social media has become a world wide phenomenon and many countries have adapted to the internet, new forms of technology and a variety of social media networks. 5 takeaways: The Rise of Visual Content Marketing. 29 October 2015 by Zoe Harrington Find out what Visual Marketing is and how we can help you. 2015 has been the year where we saw a stunning increase of visuals, such as images and videos, on websites, social media and blogs.

Welcome to the rise of visual content marketing. You simply need to just take a look at your Facebook newsfeed to see the increasing amount of images and videos that are being shared every day. YouTube Marketing ▶ Tips, Trends, & Strategies. Google gains billions in value as YouTube drives ad growth. YouTube Growth Impresses Analysts, Wall Street. The Stars of YouTube and Vine. If you haven’t watched YouTube in a while—if you’ve joined the Amish, or you’re Edward Snowden—a lot has changed. Early on, the platform was a salmagundi of out-of-focus lifecasts. The viral hits were cats getting wet and one-offs like “Charlie Bit My Finger—Again! ,” a 2007 video whose exposé of House of Atreus-style family strife has earned it more than eight hundred million views. (Spoiler alert: a baby bites his brother’s finger.) YouTube was adults with camcorders shooting kids being adorably themselves. Nowadays, YouTube is almost alarmingly professional. Brands and Agencies Behind the Most Popular Ads on YouTube.

At the 2015 IAB MIXX Conference, YouTube (along with other sponsors) ran a print ad in the print version of the program. (How retro, right? And for an interactive advertising conference about “the emergence of a mind-blowing, beautiful, consumer-centric digital world,” no less!). But, the print ad contained information that I hadn't seen before: The Top Creative Agencies, the Top Brands, and the Top Media Agencies based on the YouTube Ads Leaderboards.

Did YouTube Just Ruin YouTube? YouTube Digest is a look at some of the most popular new Web videos of the week. This week, we have a new YouTube subscription service that has many fans and creators up in arms, the final part of an epic music video trilogy, a strange celebrity video, a stolen sketch, and an important update on Skids the cat. Meet YouTube Red - 590,388 views This week, YouTube unveiled the new service YouTube Red, which promises no ads, offline playability, and background play—for a price. Infographic: 46% of Consumers Use Social Media in Purchase Decisions. I want you to do a test. Go to Twitter and search for a hashtag related to your business and follow leaders that appear, go to Facebook and search for a group related to your industry and join it, then go to LinkedIn and join an industry group. Instagram expands its advertising platform. Instagram Testing 3D Touch Ads. Growing Social Media - Social Media News And Trends.

This is Twitter's first television ad campaign. This month Twitter unveiled Moments, the simplified way of browsing tweets that the company hopes will return it to rapid growth. It's an increasingly pressing concern: today the company announced it added just 4 million new monthly users in its most recent quarter, news that sent the stock tumbling.

Before releasing Moments, Twitter said its release would be accompanied by a large-scale marketing campaign designed to reach people who had never used Twitter before, or who had tried and abandoned it years ago. Today, that marketing campaign arrives, led by a series of television advertisements that will debut tonight during the World Series. Introducing the Instagram Partner Program - Instagram for Business. Today, we’re excited to announce the addition of Instagram Partners—a set of experts vetted for excellence ready to help businesses grow on Instagram. Justin Bieber's selfies used to bring Instagram to its knees. Infographic: Why Millennials Love Video Marketing. Real time world statistics. Why Social Media Advertising Is Set To Explode In The Next 3 Years.