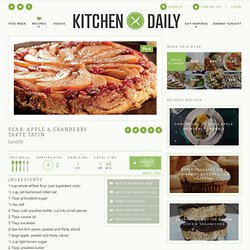 To prepare crust: Place flour, oats, granulated sugar and salt in a food processor; process until the oats are finely ground. Salted Caramel-Chocolate Dump Cake recipe. One minute, I was minding my own business and before I knew it, I was dumping chocolate pudding, chocolate cake mix, caramels and sea salt into a pan. 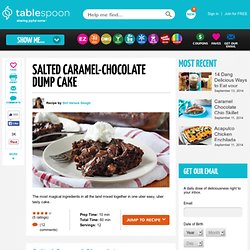 And then, seconds later, I was placing the pan into the oven. Once my kitchen smelled like heavenly, desserty things, I pulled the cake out of the oven and WHAT – drizzled it with more chocolate! And soon after that, I was inhaling the cake by the handful, alternated with spritzes of whipped cream from the can directly into my mouth. Virginia Peanut Pie With Coke Reduction. A stone's throw from Coca-Cola's headquarters in Atlanta, Georgia is a favorite local restaurant called JCT Kitchen. 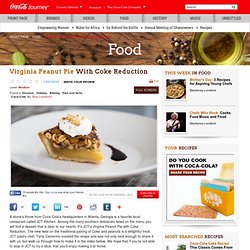 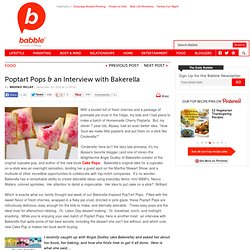 But, my clever 7-year-old, Alyssa, had an even better idea, “How ’bout we make little poptarts and put them on a stick like Cinderella?” ‘Cinderella’ here isn’t the fairy tale princess, it’s my Alyssa’s favorite blogger (and one of mine)–the delightsome Angie Dudley of Bakerella–creator of the original cupcake pop, and author of the new book Cake Pops . Twix Cake. This cake is now known to me as The Cake That the Entire Universe Conspired Against. 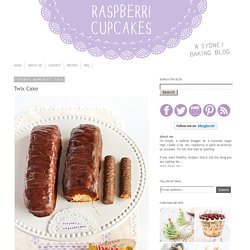 Okay it was more just my foolish mistakes but I'm frustrated at the moment and would rather blame the universe. Garlic Parmesan Pull-Apart Bread. I once made the driest pancake in the world. 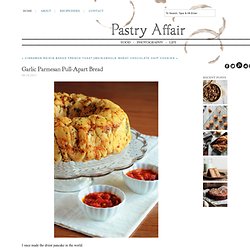 I can see you sitting at home, staring at your computer screen, and scoffing at my bold statement. Driest pancake in the world? Yeah, right. Jason's Everlasting Recipes: Cheesecake Stuffed Strawberries. Titanic –– Love, Courage and Apple Meringue. The Titanic sank 100 years ago on April 15th, 1912. 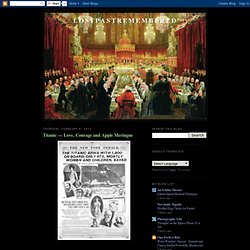 It is extraordinary that even after 100 years, the doomed Titanic continues to fascinate. My friends at 12 Bottle Bar and I are in a Titanic mood as the anniversary approaches, and why not? There is so much to share about the voyage, the ship and the people –– what they ate (my field of interest) –– what they drank (cocktails are the 12 Bottle Bar bailiwick) ­­–– so much that we decided to do another post together. Want To Learn How to Make Gordon Ramsay's Favourite Dessert?-Hot Chocolate Fondant.

Posted by Grace Massa Langlois on Friday, 16th July 2010 Gordon Ramsay and his thoughts on Hot Chocolate Fondant – “Whenever I’m asked for my favourite recipe, this is the one. 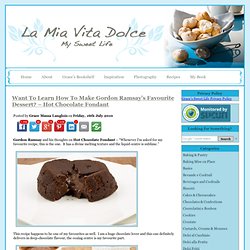 It has a divine melting texture and the liquid centre is sublime.” Big Red Kitchen: Little Peach Cakes. More Food Crafts:Chocolate Covered Strawberry Mallow CandiesRainbow Cupcakes with Rainbow FrostingCandy Cake The title of this post sounds like a term of endearment someone may bestow on a cute little child, but no, the photo is a shot of my Little Peach Cakes made this morning for when my niece and nephew come over to play. 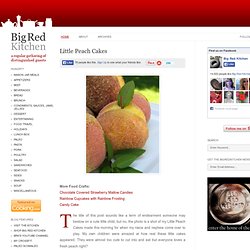 My own children were amazed at how real these little cakes appeared. They were almost too cute to cut into and eat but everyone loves a fresh peach right? I had spotted these in a magazine years and years ago (maybe Southern Living?) And just today thought to make them. Apple Pies. I know, I’ve made a few pies lately. 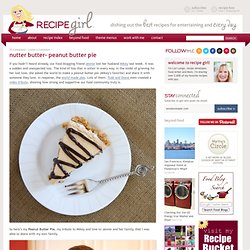 It was a sudden and unexpected loss. The kind of loss that is unfair in every way. In the midst of grieving for her lost love, she asked the world to make a peanut butter pie (Mikey’s favorite) and share it with someone they love. Devil’s Food Cake for Design Sponge : Cafe Fernando – Food Blog - biscoff - devil's food cake - Cakes. October 30th, 2010 | Category: Cakes, Chocolate I am a big fan of Design Sponge‘s “In The Kitchen With” column. Every Friday, they feature talented cooks, bakers, photographers and food stylists from all around the world and publish a recipe for the rest of us to drool over. Nutella Mug Cake. Pumpkin Pie Bites. I’ve been in a mini-mood lately when it comes to baking and these bite-sized pies met my big craving. They are really, really easy. Let me show ya.

Of course, it didn’t hurt that I used ready to roll refrigerated pie crust. It comes two to a box and if you roll each round pie crust a little bit thinner with a rolling pin, you can get 24 mini pumpkin-shaped pie crusts out of them. Make sure you use all the dough scraps and re-roll to maximize quantities. Then, stuff each one in a mini muffin baking pan. Press the dough down, in and around the edge of each muffin cup. Fill each pie crust with pumpkin filling all the way to the top. When they come out of the oven, they’ll be puffed up like this. But no, after they cool for a few, they’ll fall and be flush with the pie crust. See… easy mini pumpkin pie bites. You can even drizzle them with melted chocolate to jazz them up a bit. But wait… you say you don’t want to wait until Thanksgiving. Twix Cheesecakes.