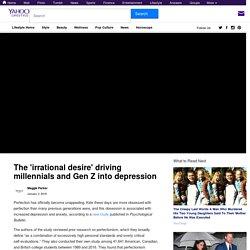 Kids these days are more obsessed with perfection than many previous generations were, and this obsession is associated with increased depression and anxiety, according to a new study published in Psychological Bulletin. The authors of the study reviewed prior research on perfectionism, which they broadly define “as a combination of excessively high personal standards and overly critical self-evaluations.” They also conducted their own study among 41,641 American, Canadian, and British college students between 1989 and 2016. They found that perfectionism increased over time.

And it’s worst in the United States. The research presents three reasons for this shift: the rise of neoliberalism, increasingly anxious and controlling parents, and the increasing power of meritocracy. Dr. So what’s so bad about striving to be perfect? It’s not just the self-inflicted perfectionism that causes problems. There are two sides to every story, right? Eight in 10 Americans Afflicted by Stress. Story Highlights Four in 10 U.S. adults (41%) say they lack the time to do all they wantA similar proportion (44%) frequently feel stressed WASHINGTON, D.C. -- About eight in 10 Americans say they frequently (44%) or sometimes (35%) encounter stress in their daily lives. 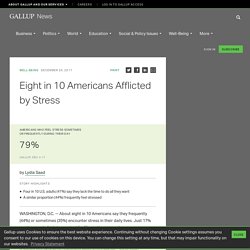 Just 17% say they rarely feel stressed, while 4% say they never do. Although stress is common, just 41% of U.S. adults say, in answer to a different question, that they lack the time they need to do things they want. The majority, 59%, tend to think they do have enough time. Always Tired World Of Knowledge AU August 2015 (gnv64) Warrior Mindset. The Upside of Stress Spirituality & Health Magazine Embrace your Stress (May June 2015) (True PDF) Stay Calm Solution Prevention 2010 09. The Adrenal Reset Diet Strateg Alan Nmd Christianson. Stress The Underestimated Enemy Longevity February 2016. Stress, the Brain and Depression. 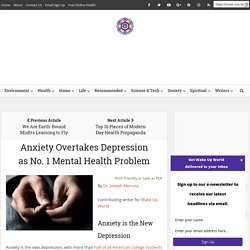 Joseph Mercola Contributing writer for Wake Up World Anxiety is the New Depression Anxiety is the new depression, with more than half of all American college students reporting anxiety.[1] Recent research shows anxiety — characterized by constant and overwhelming worry and fear — is now 800 percent more prevalent than all forms of cancer.[2] A 2016 report by the Center for Collegiate Mental Health at Penn State[3] confirmed the trend, finding anxiety and depression are the most common concerns among college students who seek counseling.[4] Data from the National Institute of Mental Health (NIMH) suggests the prevalence of anxiety disorders in the U.S. may be as high as 40 million, or about 18 percent of the population over the age of 18, making it the most common mental illness in the nation.[5],[6] Fortunately, there are many treatment options available, and some of the most effective treatments are also among the safest and least expensive, and don’t involve drugs.

Indeed, Mr. Children’s Mental Health and Societal Pressures. What is happening to our society? 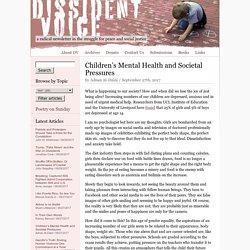 Sunff Out Stress. Chronic Stress Causes Brain to Shrink. 70% of Millennials Report Anxiety From Not Having Their Cell Phone - LendEDU. In 2017, you can walk down any street almost anywhere in the world and see more people looking down at their cell phones than those looking up. ​ 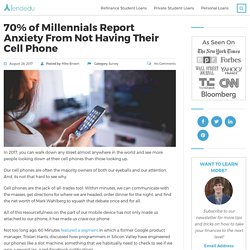 Our cell phones are often the majority owners of both our eyeballs and our attention. And, its not that hard to see why. Cell phones are the ​jack-of-all-trades tool. Within minutes, we can communicate with the masses, get directions for where we are headed, order dinner for the night, and find the net worth of Mark Wahlberg to squash that debate once and for all. All of this resourcefulness on the part of our mobile device has not only made us attached to our phone, it has made us crave our phone. Not too long ago, 60 Minutes featured a segment in which a former Google product manager, Tristan Harris, discussed how programmers in Silicon Valley have engineered our phones like a slot machine, something that we habitually need to check to see if we won a reward (ex. a red Facebook notification). 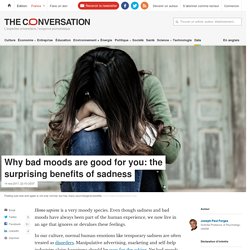 Even though sadness and bad moods have always been part of the human experience, we now live in an age that ignores or devalues these feelings. In our culture, normal human emotions like temporary sadness are often treated as disorders. Manipulative advertising, marketing and self-help industries claim happiness should be ours for the asking. Yet bad moods remain an essential part of the normal range of moods we regularly experience. Despite the near-universal cult of happiness and unprecedented material wealth, happiness and life satisfaction in Western societies has not improved for decades.