Year 7 PDHPE : Not Just Me. Multicultural youth optimistic but still face discrimination, census reveals. Young Australians from refugee and migrant backgrounds still experience discrimination but are optimistic about their futures, according to a new nationwide study. 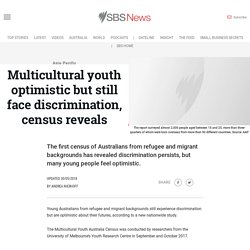 The Multicultural Youth Australia Census was conducted by researchers from the University of Melbourne’s Youth Research Centre in September and October 2017. The survey of almost 2,000 people aged between 15 and 25 found Australia's young multicultural cohort have an overwhelming sense of optimism, with 87 per cent saying they're confident they can reach their goals. RMIT university student William Ton, who has Vietnamese heritage, said he feels "positive about his future".

“I’m one of the lucky ones because there’s so much opportunity for me, so many options, so many pathways," he told SBS News. Census co-producer Johanna Wyn, an education professor at the University of Melbourne, warned that this positive attitude can change over time. Nikita Thomas for Multicultural Youth Advocacy Network (Australia). Teen tracking study shows they spend most waking hours sitting down. Australian teenagers sit for more than two-thirds of the day, which may increase their risk of physical and social health problems, according to a first-of-its-kind study from Deakin University’s Institute for Physical Activity and Nutrition (IPAN). 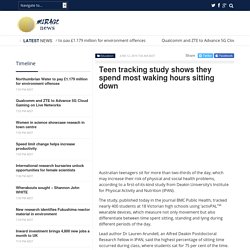 The study, published today in the journal BMC Public Health, tracked nearly 400 students at 18 Victorian high schools using ‘activPALTM‘ wearable devices, which measure not only movement but also differentiate between time spent sitting, standing and lying during different periods of the day. Lead author Dr Lauren Arundell, an Alfred Deakin Postdoctoral Research Fellow in IPAN, said the highest percentage of sitting time occurred during class, where students sat for 75 per cent of the time. This was followed by evenings, where 73 per cent of time was spent sitting. Australia Has One Of The Highest Food Allergy Rates In The World—What’s Going On? When I was growing up, peanut butter was still allowed in school lunch boxes and soggy egg sandwiches were the norm. 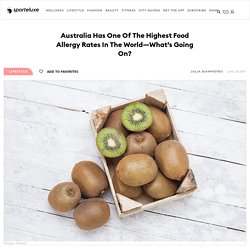 You knew what an EpiPen was but never really came across one and ‘anaphylaxis’ was just a word you couldn’t pronounce. Fast forward 20 or so years and it seems as though everywhere you turn, you know of a child (or adult) with a food allergy. Differing greatly to ‘a food intolerance’, a food allergy is a serious, life-threatening condition—and one that’s developing at a rapid rate. 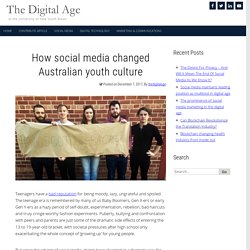 The teenage era is remembered by many of us Baby Boomers, Gen X-ers or early Gen Y-ers as a hazy period of self-doubt, experimentation, rebellion, bad haircuts and truly cringe-worthy fashion experiments. Puberty, bullying and confrontation with peers and parents are just some of the dramatic side effects of entering the 13 to 19-year-old bracket, with societal pressures after high school only exacerbating the whole concept of ‘growing up’ for young people. But since the advent of social media, things have changed in a dramatic way for teenagers – in both good and bad ways.

With the internet in their pocket, a litany of ‘followers’, unmanageable numbers of virtual friends and with access to pretty much every platform, resource and community in the world, a millennium teenager is subject an entirely different host of influences than a child of the 80s was. So, what are the impacts? But let’s talk fashion. Peer pressure. Peer groups – the positives Peer groups are groups of friends who are all about the same age.

Having a group of friends is an important part of being a teenager. It is how teenagers learn to get on in the world of their own age group and to gradually become independent. It is important for parents to understand the value of peer groups for young people. Peer groups can be a very positive influence on your teenager’s life. Peer groups – the positives Peer groups and parents Some of the problems that peer groups may present to parents include: long hours on the telephone or social media a home that’s overrun with teenagers disruption to ‘house rules’ – members of the peer group may do things that are unacceptable in your household, such as smoke, swear, drink alcohol or raid your refrigerator serious behaviours, such as shoplifting or drug-taking. Teenagers-more-anxious-and-depressed-20140710-zt303.

By Lydia Hales What is it with teens and sleep? 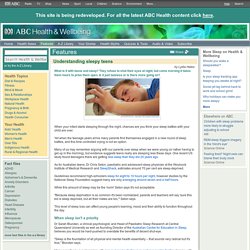 They refuse to shut their eyes at night, but come morning it takes them hours to prise them open. Is it just laziness or is there more going on? [Image source: iStockPhoto | monkeybusinessimages] When your infant starts sleeping through the night, chances are you think your sleep battles with your child are over. Yet when the teenage years arrive many parents find themselves engaged in a new round of sleep battles, and this time controlled crying is not an option.

Many of us may remember arguing with our parents over sleep when we were young (or rather having to get up in the morning), but evidence suggests teens really are sleeping less these days. Welcome to ReachOut.com. Resource library. Teenage sleep: Understanding and helping the sleep of 12 - 20 year olds. Teenage sleep. What is unique about teenagers’ sleep? 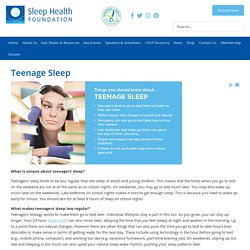 Teenagers' sleep tends to be less regular than the sleep of adults and young children. This means that the times when you go to bed on the weekend are not at all the same as on school nights. On weekends, you may go to bed much later. You may also wake up much later on the weekends. Late bedtimes on school nights makes it hard to get enough sleep. Teenagers and sleep.