Puberty blocking drugs used on "trans kids" have killed more than 6,000 people. Mormons Are Severing Ties with Boy Scouts. The Mormon church announced Tuesday it will sever a more than century-old tie with the Boy Scouts of America and transfer its remaining 425,000 boys in the program into a gospel-focused youth group it is developing. 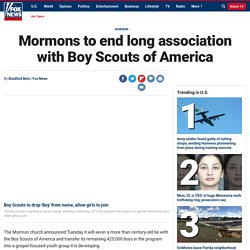 The church’s announcement follows the Boy Scouts’ unprecedented decision in 2015 to allow gay troop leaders and last year, to allow girls in its ranks – both seemingly at odds with the conservative beliefs of the Mormon church. Last week the BSA announced it will drop the word "Boys" from its name to reflect the inclusion of girls. In this July 8, 2014 photo, a group of Boy Scouts march during the Salt Lake City's annual gay pride parade in Salt Lake City, Utah. (Associated Press) The Church of Jesus Christ of Latter-day Saints initially said it was "deeply troubled" by the Boy Scouts' policy change on gays but stayed with the organization after receiving assurances it could appoint troop leaders in accordance with its own religious and moral values.

Moonbat Model Family. Congratulations to the media on finding the perfect model family to encourage us to emulate. 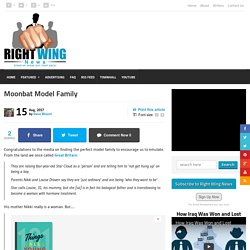 From the land we once called Great Britain: They are raising four-year-old Star Cloud as a ‘person’ and are telling him to ‘not get hung up’ on being a boy.Parents Nikki and Louise Draven say they are ‘just ordinary’ and are being ‘who they want to be’.Star calls Louise, 31, his mummy, but she [sic] is in fact his biological father and is transitioning to become a woman with hormone treatment. His mother Nikki really is a woman. But… Jimmy Kimmel Under Fire for Hurling 'Homophobic Slurs' at Hannity and Trump. During a heated Twitter exchange between Kimmel and Hannity, the ABC funnyman repeatedly suggested that President Trump and Hannity were having a sexual relationship. 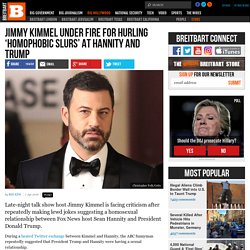 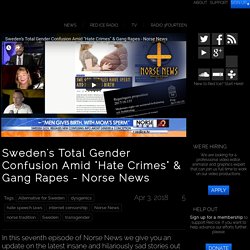 Stories covered in this show: 1. A 65-year-old Swedish Women harassed by Police for "hate crime" on Facebook, refuses to confess. 2. "Net Hate" researcher let the Yaks on his farm starve to death. Are People Born Transgender? - Michael Brown. Two recent headlines proclaim, “Transgender people are born that way, a new study has found,” and “Scientists uncover 20 genes linked to being transgender – supporting claims the condition has a physical basis.” 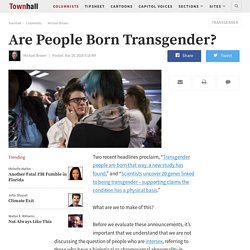 What are we to make of this? Before we evaluate these announcements, it’s important that we understand that we are not discussing the question of people who are intersex, referring to those who have a biological or chromosomal abnormality in terms of their sex. Nobody Is Truly Transgender Because Sex Change Is ‘Physically Impossible,’ Writes Philosopher. A person can pretend to be a member of the opposite sex, Dr. 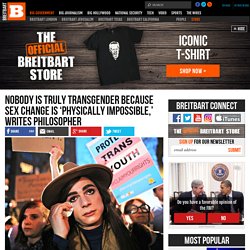 Anderson notes, but it will never be more than play-acting since one’s biological sex is a physical reality outside the individual’s control. “Modern science shows that our sexual organization begins with our DNA and development in the womb, and that sex differences manifest themselves in many bodily systems and organs, all the way down to the molecular level,” Anderson writes. Because biological sex is a result of genetic makeup, determined by chromosomal configuration, medicine cannot turn a girl into a boy. Transgender teen outed by wrestling coach, mom says - Cincinnati News, Weather, Sports from FOX19 NOW-WXIX.

A freshman wrestler at Wilmington High School said he left the team after a coach revealed his transgender identity in front of his classmates. 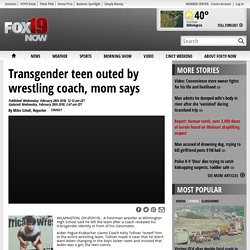 Aiden Pogue-Krabacher claims Coach Kelly Tolliver “outed” him to the entire wrestling team. Tolliver made it clear that he didn’t want Aiden changing in the boy’s locker room and insisted that Aiden was a girl, the teen claims. The Wilmington School Board confirms the incident is under investigation. Aiden said he told Tolliver that he was not a girl, but the coach “still proceeded to say, ‘yes you are’ and kicked me out,” Aiden said. 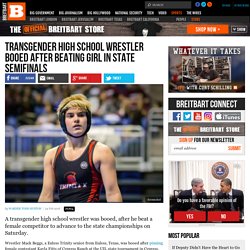 Beggs drew criticism last year for joining the female wrestling team when his parents claimed he was beginning the “transition” from female to male, using a testosterone regimen therapy. Opponents sued the school claiming that the testosterone gave the student an unfair advantage against his female opponents. Despite the lawsuit, the transitioning student went on to win last year’s Class 6A girls championship in the 110-pound division. Parents Lose Custody of Daughter for Opposing Transgender Medical Treatments. Judge Sylvia Sieve Hendon of Hamilton County, Ohio has allowed the girl to be taken into the custody of her grandparents – who support her medical transition – allowing them to make decisions that will further along her physical transition to the opposite sex. 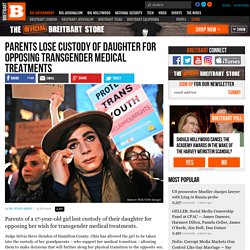 According to CNN, Hendon ordered that the family’s names not be released. The parents reportedly continued to call their daughter by her given name, rather than a male name, and refused to consent to hormone treatments that were recommended by her medical team. Judge issues key ruling on ‘same-sex wedding’ cakes. A California judge has refused to advance a social agenda in his state that targets Christians who refuse to endorse homosexuality through their work. 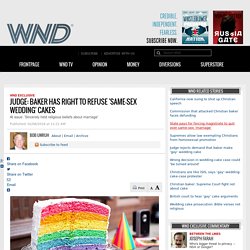 In this case it was baker Cathy Miller of Tastries Bakery who was put in a state bull’s-eye because she refused to use her artistic talents to promote the “wedding” of two lesbians. The state asked Superior Court Judge David Lampe to issue a preliminary injunction ordering Miller either to create wedding cakes for same-sex duos or be barred from serving anyone. But Lampe recognized that the issue is not about discrimination against same-sex couples. Walgreens Caves to Gay Agenda, Allows Men in Women’s Restrooms.

Is California a liberal lunatic wasteland beyond saving? Students calling for removal of LGBT flag liken it to rebel flag. A group of students and parents in Alabama is calling for the removal of a rainbow pride flag from a high school classroom — arguing that it can be compared to displaying a Confederate flag. “We strongly feel that it creates a hostile and provocative learning environment for students not comfortable to openly supporting the LGBTQ+ community in a public school where students come from diverse political and religious backgrounds,” a Change.org petition reads about the flag in Auburn. More than 800 people have signed the petition demanding the flag on display just outside a classroom at Auburn High School be taken down.

That’s not surprising since she’s still pushing her 2015 book, Becoming Nicole: The Transformation of an American Family. See Also: High noon in the US Senate: Dems caving? Cathy Ruse at The Daily Signal has a long, well developed breakdown of the speech given at the assembly as well as the question and answer session which followed.

(Be warned in advance that some of this is extremely disturbing and Nutt is far off base on some of her “science.”) CA Parents Sue School for Treating 7-Year-Old Transgender 'Girl' Like a Boy. (Nikki is second from left in the photograph above, released by the family to BuzzFeed News.) The complaint alleges that the Heritage Oak Private Education school in Yorba Linda “unlawfully discriminated against Nikki,” and elaborates: “Heritage Oak repudiated Nikki’s core identity. It refused to use the name, pronoun, and gender corresponding to Nikki’s gender identity, required Nikki to wear the boy’s uniform and use the boy’s restroom, and failed to address the bullying that Nikki was subjected to because of her gender identity and gender expression.”

The complaint also describes the harm that Nikki allegedly suffered: California Becomes First State To Legally Recognize A 'Third Gender' TransKids: Gender Affirming Supplies for Your Child. Brad Pitt ‘Horrified’ As Angelina Jolie Pays For Daughter's Sex Change. Brad Pitt has expressed horror at news that his daughter, Shiloh Jolie-Pitt, is to begin the process of a sex change with Angelina Jolie’s blessing.

Shiloh began hormone treatment on May 11th, shortly after starting puberty. Hln.be reports: When she was two, Shiloh – Brad and Angelina’s oldest biological child – still appeared in public wearing cute pink dresses. As a toddler, the child made it clear that she wanted to go through life as a boy. Gov't Must Impose 'Transgender' Demands Nationwide, Says Judge. In legal jargon, Judge Marsha Pechman declared in a lawsuit against the Pentagon’s “transgender” policy that the federal government must use its powers to champion people who want to live as members of the sex, either inside the military or outside, just as it must use federal powers to suppress racism: Today, the Court concludes that transgender people constitute a suspect class.

Transgender people have long been forced to live in silence, or to come out and face the threat of overwhelming discrimination. California Bill: 1 Year in Jail for Using Wrong Transgender Pronoun. The bill, SB 219, was proposed by State Sen. Scott Wiener (D-San Francisco). $200,000 going to discover how transgenders deal with ‘stress’ WASHINGTON – Despite President Trump’s reversal of Obama-era policies on transgenderism, his administration still is spending hundreds of thousands of taxpayer dollars on transgenderism research, the government watchdog Judicial Watch warns.

A sociology instructor at the taxpayer-funded University of Michigan has published an academic journal article exposing America’s preschool classrooms as hotbeds of “heteronormative play” where “traditional fairy tales” persist and “heterosexuality is always assumed, expected, ordinary, and privileged.” The University of Michigan instructor behind the exposé of sexuality in preschool life is Heidi M. Gansen, according to Campus Reform. Sociology of Education, a quarterly journal, published the July 14 article entitled “Reproducing (and Disrupting) Heteronormativity: Gendered Sexual Socialization in Preschool Classrooms.” N.C. gov.: Businesses must allow men in women's restrooms.