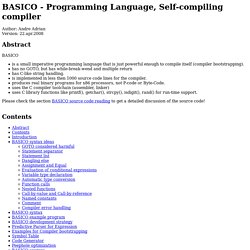 Bedrock, a Coq library for verified low-level programming. Bedrock is a library that turns Coq into a tool much like classical verification systems (e.g., ESC, Boogie), but niftier. 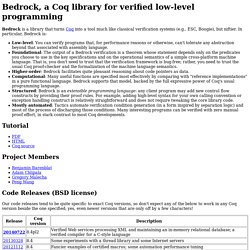 In particular, Bedrock is: Barb is a simple dynamic data scripting language for .NET. Example Getting started with Barb is easy! 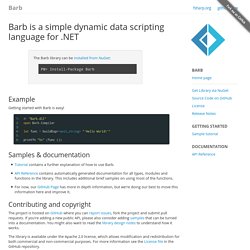 Samples & documentation Tutorial contains a further explanation of how to use Barb.API Reference contains automatically generated documentation for all types, modules and functions in the library. This includes additional brief samples on using most of the functions.For now, our GitHub Page has more in depth information, but we're doing our best to move this information here and improve it. 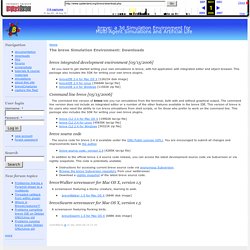 This package also includes the SDK for writing your own breve plugins. Command line breve [05/15/2006] The command line version of breve lets you run simulations from the terminal, both with and without graphical output. The command line version does not include an integrated editor or a number of the other features available in the breve IDE. The Brat Language - Brat Programming Language. Recent Activity Blog Optimizing with Lifting Functions and Faking Closures - 07 Sep 2015. 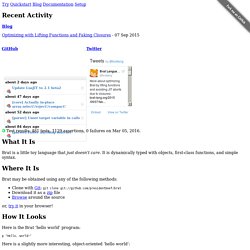 GitHub - BartJongejan/Bracmat: Programming language born from simple Computer Algebra system. Good at pattern matching in tree structures and in strings. Welcome to the Box project! — Box 0.2.0 documentation. BMDFM The Official Web Site. BGBScript - VpriWiki. From VpriWiki BGBScript is the personal project of Brendan G Bohannon (among several other projects, such as the BGBTech 3D Engine, ...). 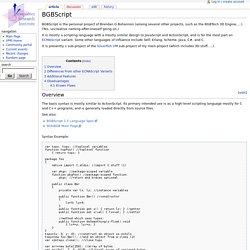 (Yes, uncreative naming-after-oneself going on.) It is mostly a scripting language with a mostly similar design to JavaScript and ActionScript, and is for the most part an ECMAScript variant. Some other languages of influence include Self, Erlang, Scheme, Java, C#, and C. It is presently s sub-project of the Silverfish VM sub-project of my main-project (which includes 3D stuff, ...). ArnorBCPL. ArnorBCPL. Banana Algebra. BProlog. BEK. BEK is a domain specific language for writing common string functions, combined with state of the art analysis. 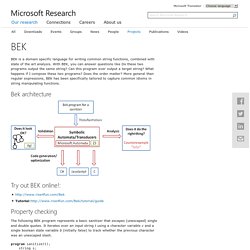 With BEK, you can answer questions like Do these two programs output the same string? Can this program ever output a target string? Breeze. Breeze. Bori Programming Language. B4J - Free development tool for Windows, Mac and Linux. B4J - The simple way to develop cross platform, desktop and web applications! 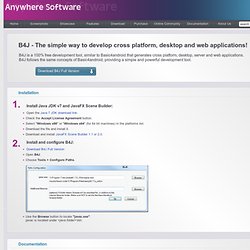 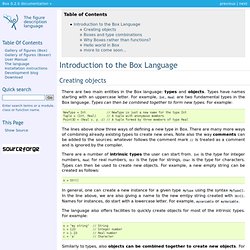 Types have names starting with an uppercase letter. For example, Int, Real are two fundamental types in the Box language. Types can then be combined together to form new types. BProlog. SdlBasic. Boogie: An Intermediate Verification Language. Boogie is an intermediate verification language, intended as a layer on which to build program verifiers for other languages. 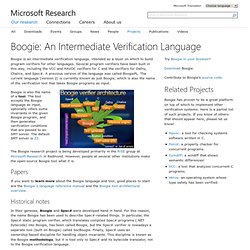 Several program verifiers have been built in this way, including the VCC and HAVOC verifiers for C and the verifiers for Dafny, Chalice, and Spec#. A previous version of the language was called BoogiePL. The current language (version 2) is currently known as just Boogie, which is also the name of the verification tool that takes Boogie programs as input. The Boogie research project is being developed primarily in the RiSE group at Microsoft Research in Redmond.

Untitled. Bori. Boxlang: a scripting language with inherent thread safety. Disorderly programming for the cloud and other distributed systems. BPL. BRL - the Beautiful Report Language. Borneo Language Homepage. Borneo may be on the right track for Java. --Guy Steele New Models for Numerical Computing in the Java Programming Language Java Grande - ISCOPE 2001 Conference, June 3, 2001 Borneo is a dialect of the Java language designed to have true support for the IEEE 754 floating point standard. Abstract The design of Java relies heavily on experiences with programming languages past. Major Java features, including garbage collection, object-oriented programming, and strong static type checking, have all proved their worth over many years. Blassic: The classic Basic. Description Blassic is a classic Basic interpreter. The line numbers are mandatory, and it has PEEK & POKE. The main goal is to execute programs written in old interpreters, even those that use peculiar control flow constructs or automodifiable code.

Features should be split among several smaller and reusable packages to avoid single large packages that require each feature to be reimplemented in another similar package. Smaller packages load faster and optimizations can be applied to a single package instead of its many implementations over multiple packages. The security in BRiX will allow untrusted source code to be downloaded and installed without worry of it harming the system or user data. Free Development software downloads. Business Shell (Bush) - PegaSoft Canada. <HR> BUSH Details: <HR> The Business Shell has been renamed to SparForte. For the latest version of BUSH, see the SparForte Home Page. Screenshot: BUSH script (in TIA IDE) Bush is easy to learn. Bas - BASIC interpreter. Moria.de Michael's homepage Computing. BeeBasic embeddable scripting language. Biferno. Jim Lawless' Spotlight on BPL. The BOIL interpreter language. Martin Richards.

Thoroughly Modern As a superset of earlier versions of BBx including PRO/5® and Visual PRO/5®, BBj is compatible with legacy BBx products. The Brain Language. Boomerang Decompiler. Bard. Babel-lang - Babel is a knowledge representation language that aims to be as expressive as most natural language. BOO - Home. Boron Scripting Language. Blocks Language. Brace. Brace is a dialect of C that looks like Python. Brace has coroutines, hygienic macros, header generation, #! Scripting and cached executables, libraries with graphics and sound, and many animated demos.

Brace runs on GNU/Linux (best), and at various points in time has been known to work on MinGW/Windows, FreeBSD, OpenBSD, NetBSD, Solaris, and GNU/Hurd. It should be easy to port it to Mac OS X with X11, except that I don't have such a computer and don't much like apple at the moment. Bare Bones Interpreter. Free Development software downloads. Free Development software downloads.