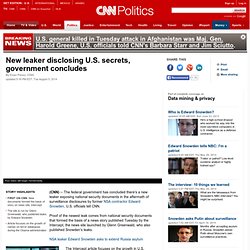 FIRST ON CNN: New documents formed the basis of story on news site, InterceptThe site is run by Glenn Greenwald, who published leaks by Edward Snowden Article focuses on the growth of names on terror databases during the Obama administration (CNN) -- The federal government has concluded there's a new leaker exposing national security documents in the aftermath of surveillance disclosures by former NSA contractor Edward Snowden, U.S. officials tell CNN. Proof of the newest leak comes from national security documents that formed the basis of a news story published Tuesday by the Intercept, the news site launched by Glenn Greenwald, who also published Snowden's leaks. 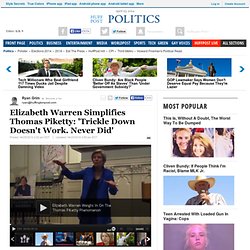 Elizabeth Warren, weighed in Thursday night on the No. 1 book, identifying overlapping themes. At a reading at the Harvard Book Store, the Massachusetts Democrat, author of A Fighting Chance, was asked about Thomas Piketty's new book, Capital in the Twenty-First Century, and specifically about its contention that trickle-down economics "definitively do not work.

" Warren cut in. "Can we say that part again? 'Definitely do not work,'" she repeated. Warren, whose own book was going to be titled Rigged but ultimately went out with a more hopeful title, said that while Piketty's book could elicit despair, she found a hopeful note in it, too. Franken’s Campaign Against Comcast Is No Joke. Photo WASHINGTON — For Senator , the political became personal at a “Saturday Night Live” cast party, of all places. 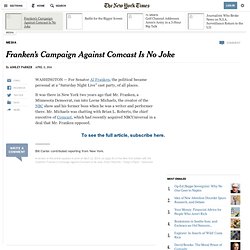 It was there in New York two years ago that Mr. 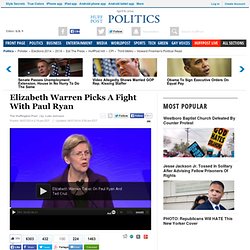 Sen. Warren (D-Mass.) and Rep. Neil deGrasse Tyson Blasts Creationism In New 'Cosmos' Episode. Just days after creationist groups complained their views had been excluded from Neil deGrasse Tyson's "Cosmos: A Spacetime Odyssey," it seems they finally got some airtime on the show. 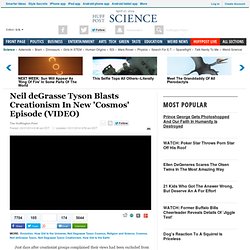 Monty Python Confirm: No Tour, Final O2 London Gig Will Be Their Last Ever Live Performance Together. How the secret police tracked my childhood. Fighting the system used to be dangerous anywhere in Eastern Europe. 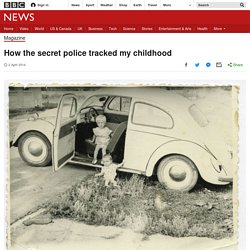 For one protester from a small Romanian village it was disastrous - and also for his family, whose every word was recorded by the secret police. Carmen Bugan, who found the transcript of her childhood, tells their story. Soon after my brother's birth in February 1983 my father, Ion Bugan, was faced with the biggest decision he ever had to make. Hack attacks battled by net's timekeepers. 20 March 2014Last updated at 07:45 ET By Mark Ward Technology correspondent, BBC News Login servers for online game League of Legends were hit by attacks abusing net time servers A massive worldwide effort is under way to harden the net's clocks against hack attacks. 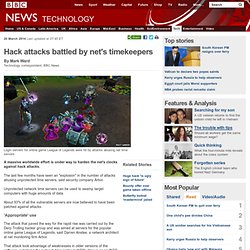 The last few months have seen an "explosion" in the number of attacks abusing unprotected time servers, said security company Arbor. Unprotected network time servers can be used to swamp target computers with huge amounts of data. Snowden leaks: NSA 'can collect all calls in foreign nation' 18 March 2014Last updated at 18:49 ET A briefing document on the system, Mystic, reportedly shows a cartoon wizard with a mobile phone on his staff The US government has reportedly built a system that can record every phone call made over a month in an undisclosed foreign country. 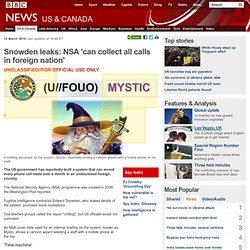 The National Security Agency (NSA) programme was created in 2009, the Washington Post reported. Fugitive intelligence contractor Edward Snowden, who leaked details of the system, promised more revelations. Civil liberties groups called the report "chilling", but US officials would not comment. What This President Said About U.S. Security Needs To Be Tattooed On Every Congressperson's Hand. Manal al-Sharif May Be Saudi Arabia's Most Awesome Woman. Manal al-Sharif, the Saudi Arabian woman who sparked a protest movement when she defied the ban on women drivers with a YouTube video of herself behind the wheel, has been called the Rosa Parks of her country. 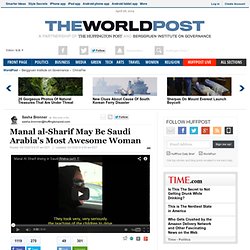 But don't call her an activist. Al-Sharif, honored Friday in Beverly Hills, Calif., at a Women In The World luncheon hosted by former Daily Beast editor Tina Brown, said she resents the label. The annual event, begun in 2009, aims at “telling unknown stories of the women who live behind the lines of the news.” This May Be Bill Maher's Most Intense Rant Against Religions – All Of Them - Yet.

You're probably going to be hearing a lot about Bill Maher's latest "New Rule" in the coming days. 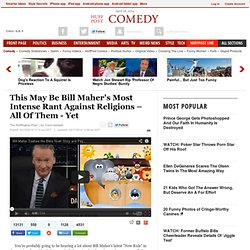 Mostly because in it, he not only takes aim at almost every religion (Bahá'í, you got lucky) but also because he calls God a "psychotic mass murderer. " The rant kicks off with Maher explaining that he's sick of seeing ads for Darren Aronofsky's "floating piece of giraffe crap" "Noah. " While he allows that the film "must be doing something right," since it's already angering both Christians and Muslims, the fact that 60% of adult Americans believe that the story of Noah is literally true is proof enough for Maher that "this is a stupid country.

" World Wide Web 25th Anniversary Marks Sir Tim Berners-Lee's Life-Changing Invention. The 25th anniversary of the world wide web will be celebrated around the globe this week. The milestone will be marked on Wednesday, a quarter of a century since it was first proposed in 1989 by British computer scientist Sir Tim Berners-Lee. For anybody under the age of 20 it is hard to imagine what life would be like without the web, which is not to be confused with the internet - a massive chain of networks, which the web uses.

Story continues after slideshow... Loading Slideshow But when Sir Tim first submitted his idea while working at Swiss physics laboratory, Cern, the response from his boss was the brief: "Vague, but exciting. "