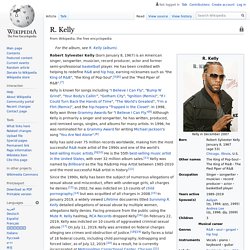 He has been credited with helping to redefine R&B and hip hop, earning nicknames such as "the King of R&B", "the King of Pop-Soul",[5][6] and the "Pied Piper of R&B".[7] Early life Robert Sylvester Kelly was born at Chicago Lying-in Hospital in the Hyde Park neighborhood of Chicago[22] on January 8, 1967.[23] He is the third of four children with an older sister and brother and a younger brother.[24] His mother, Joanne Kelly, was a professional singer who raised her children in the Baptist church, where she sang lead in the choir. That'll Be the Day. The Crickets. American rock and roll band The Crickets were an American rock and roll band from Lubbock, Texas, formed by singer-songwriter Buddy Holly in the 1950s. 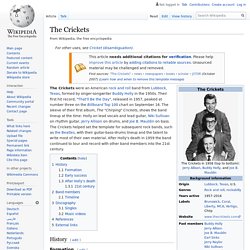 Their first hit record, "That'll Be the Day", released in 1957, peaked at number three on the Billboard Top 100 chart on September 16. The sleeve of their first album, The "Chirping" Crickets, shows the band lineup at the time: Holly on lead vocals and lead guitar, Niki Sullivan on rhythm guitar, Jerry Allison on drums, and Joe B. Mauldin on bass. How A Boogie Wit Da Hoodie Made ‘Artist 2.0’ A Boogie Wit Da Hoodie is in the middle of being lightly reprimanded. 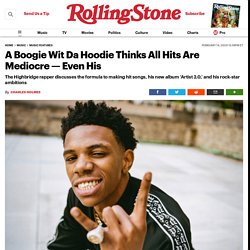 One of the lounges located in Atlantic Records’ Manhattan office is shrouded in pungent weed smoke and filled with the laughter of the Highbridge rapper, and the light clacking of his jewelry. Miguel Poveda. Miguel Ángel Poveda León (b. 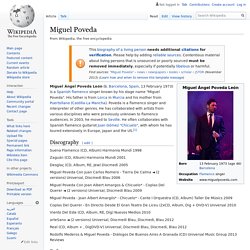 Barcelona, Spain, 13 February 1973) is a Spanish flamenco singer known by his stage name "Miguel Poveda". His father is from Lorca in Murcia and his mother from Puertollano (Castilla-La Mancha). Poveda is a flamenco singer and interpreter of other genres. Rosalía (singer) Spanish singer Rosalía and Raül Refree performing in Madrid in July 2017. 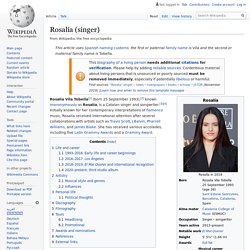 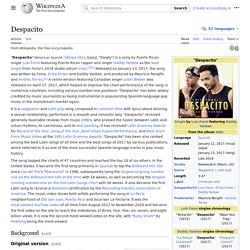 It has received Latin Grammy Awards for Record of the Year, Song of the Year, Best Urban Fusion/Performance, and Best Short Form Music Video at the 18th Latin Grammy Awards. The remix version has received three Grammy Awards nominations for Record of the Year, Song of the Year, and Best Pop Duo/Group Performance at the 60th Grammy Awards. "Despacito" has been also ranked among the best Latin songs of all-time and the best songs of 2017 by various publications, which referred to it as one of the most successful Spanish-language tracks in pop music history. Daddy Yankee. Puerto Rican singer from San Juan Ramón Luis Ayala Rodríguez (born February 3, 1977), known professionally as Daddy Yankee, is a Puerto Rican singer, songwriter, rapper, actor and record producer. 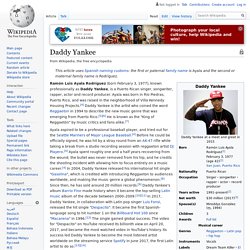 Ayala was born in Río Piedras, Puerto Rico, and was raised in the neighborhood of Villa Kennedy Housing Projects.[4] Daddy Yankee is the artist who coined the word Reggaeton in 1994 to describe the new music genre that was emerging from Puerto Rico.[5][6] He is known as the "King of Reggaetón" by music critics and fans alike.[7] As of 2017, Daddy Yankee has won 82 awards from 270 nominations since his rise to international fame in 2004. He has won 5 Latin Grammy Awards, 2 Billboard Music Awards, 14 Billboard Latin Music Awards, 2 Latin American Music Awards, 8 Lo Nuestro Awards, an MTV Video Music Award and 6 ASCAP Awards. He also received a Puerto Rican Walk of Fame Star, special awards by People en Español magazine, and the Presencia Latina at Harvard University.

Musical career[edit] Who Sang "The Proud"? Talib Kweli. [Talib Kweli] The proud Stand tall or don't stand at all, see'mon Uhh, yeah Break it down What we do? 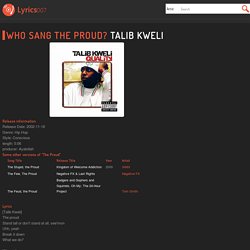 [Chorus] We survive, it's more than pride We stay alive, ready to ride [Chorus] - repeat through intro [Intro: Talib Kweli] One two, one two yo Alright.. put it down yo June 21, 2001 Timothy McVeigh is executed And the country breathe a sigh of relief Goodness prevails over evil, it seems Somehow when he's gone, we feel safer Little do we know. Pink Floyd Films a Concert in an Empty Auditorium, Still Trying to Break Into the U.S. Charts (1970) It’s hard to imagine that in the late 60s, the band who would become the most famous of the psychedelic era was still an obscurity to most U.S. listeners. 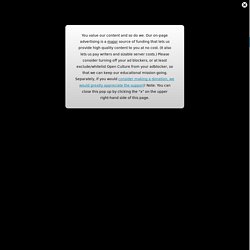 Nowadays “Pink Floyd may be the only rock band that can credibly be compared to both the Beatles and Spinal Tap,” writes Bill Wyman in a Vulture retrospective of their entire catalogue. Indeed, it’s possible their stadium-sized popularity has been underestimated. According to the data, they’ve actually sold more albums worldwide than the Fab Four. But they had to pay dues in the States. Awkwafina. Actor and rapper from New York Early life[edit] Lum was born in Stony Brook, New York, on Long Island,[3] to a Chinese-American father, Wally, and a South Korean immigrant mother, Tia, a painter.[4][5][6][7][8][9] She grew up in Forest Hills, Queens. 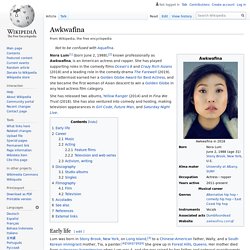 Her mother died from pulmonary hypertension when Lum was 4, and she was raised by her father and paternal grandparents, becoming especially close to her paternal grandmother.[10][11] One of her paternal great-grandfathers was a Chinese immigrant in the 1940s who opened the Cantonese restaurant Lum's in Flushing, Queens,[8] one of the neighborhood's first Chinese restaurants.[10] Career[edit] Music[edit] She was part of the lineup at Tenacious D's Festival Supreme on October 25, 2014.[21] In 2016, she collaborated with comedian Margaret Cho on "Green Tea", a song that pokes fun at Asian stereotypes.[22]

Put Your Money Where Your Mouth Is (song) 30 Seconds to Mars. Danger Mouse. Top 10 Most Underrated Beatles songs. Listen to Grace Slick's Hair-Raising Vocals in the Isolated Track for "White Rabbit" (1967) “One pill makes you larger and one pill makes you small…” Sometime in the summer of 2016, this isolated track of Grace Slick’s vocals for “White Rabbit”--probably the most famous Jefferson Airplane song and definitely one of the top ten psychedelic songs of the late ‘60s--popped up YouTube. As these things go, nobody took credit, but everybody on the Internet was thankful. Drenched in echo, Slick sings with martial precision, completely in command of her vibrato and dipping and rising all through the Phrygian scale (also known as the Spanish or Gypsy scale.) And no wonder, the song was written in 1965 after an LSD trip at her Marin county home where Slick had listened to Miles Davis’ Sketches of Spain over and over again for 24 hours.

Compare the original version to Davis’ track “Solea” to hear what I mean. Questlove: My Favorite Things of the Decade. So, How Was Your Decade is a series in which the decade’s most innovative musicians answer our questionnaire about the people, places and things that shaped their decade. We’ll be rolling these pieces out throughout December. Few artists can truly stake a claim to the James Brown Honorary “Hardest Working Person in Show Business” Title, but Questlove is certainly a contender. HuffPost is now a part of Verizon Media. Musician Morrissey showed solidarity with a far-right British political party on “The Tonight Show Starring Jimmy Fallon” on Monday.

The former Smiths frontman wore a pin with the logo of the anti-Islam For Britain as he performed his version of Jobriath’s 1973 song “Morning Starship” from his new covers album “California Son.” For Britain’s website calls for a reduction of immigration into the United Kingdom, protection of British culture and the “end of the Islamisation of the UK.” Anne Marie Waters, its leader, has previously described Islam as “evil.” Morrissey opened up about his support for the party in 2018.