Harriet Tubman Wins Poll for Woman on $20 Bill. Petitions to replace Andrew Jackson with Harriet Tubman were delivered to the White House Harriet Tubman won an online poll asking which woman should be featured on the $20 bill, as part of a movement to push President Obama to support the idea. 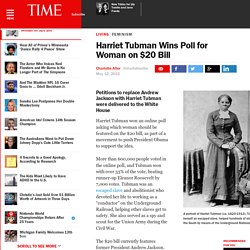 More than 600,000 people voted in the online poll, and Tubman won with over 33% of the vote, beating runner-up Eleanor Roosevelt by 7,000 votes. Tubman was an escaped slave and abolitionist who devoted her life to working as a “conductor” on the Underground Railroad, helping other slaves get to safety. She also served as a spy and scout for the Union Army during the Civil War. The $20 bill currently features former President Andrew Jackson. 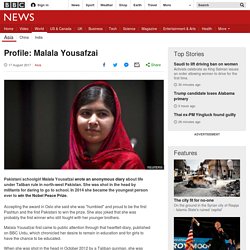 She was shot in the head by militants for daring to go to school. In 2014 she became the youngest person ever to win the Nobel Peace Prize. Accepting the award in Oslo she said she was "humbled" and proud to be the first Pashtun and the first Pakistani to win the prize. She also joked that she was probably the first winner who still fought with her younger brothers. Malala Yousafzai first came to public attention through that heartfelt diary, published on BBC Urdu, which chronicled her desire to remain in education and for girls to have the chance to be educated.

When she was shot in the head in October 2012 by a Taliban gunman, she was already well known in Pakistan, but that one shocking act catapulted her to international fame. Image copyright Birmingham Hospitals Trust Malala was only 11 years old when her anonymous diary captivated audiences. Malala's U.N. Speech Highlights. Malala Yousafzai Nobel Peace Prize Speech.

The story of Malala Yousafzai. Mythes et héros - Révisions Bac Anglais. Fiche myths & heroes. Heroes: What They Do & Why We Need Them. By Scott T. 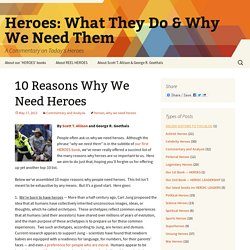 Allison and George R. Goethals People often ask us why we need heroes. Although the phrase “why we need them” is in the subtitle of our first HEROES book, we’ve never really offered a succinct list of the many reasons why heroes are so important to us. Here we aim to do just that, hoping you’ll forgive us for offering up yet another top-10 list.

Below we’ve assembled 10 major reasons why people need heroes. 1. 2. When we recognize the great sacrifices that these nurturers and caretakers have made for us, we’re likely to call them our heroes. 3. 4. 5. Heroes lift us up when we’re personally in danger of falling down emotionally, physically, or spiritually. MLK's Selma march captured by Stephen Somerstein's lens. 18 January 2015Last updated at 19:18 ET Student newspaper editor Stephen Somerstein travelled to Alabama to see Martin Luther King, Jr Some of the most memorable news imagery of the post-war years came from the struggle for black equality, when photojournalism doubled as iconography. 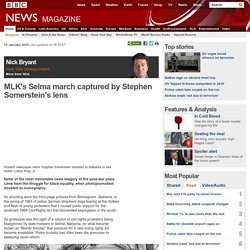 So shocking were the front page pictures from Birmingham, Alabama, in the spring of 1963 of police German shepherd dogs tearing at the clothes and flesh of young protesters that it roused public support for the landmark 1964 Civil Rights Act that dismantled segregation in the south. So grotesque was the sight of a column of civil rights protesters being bludgeoned by state troopers in Selma, Alabama, on what became known as "Bloody Sunday" that pressure for a new voting rights act became irresistible. Police brutality has often been the precursor to sweeping racial reform. Marchers on the way to Montgomery as families watch from their porches, 1965. Mythes et héros - Proposition de definition.