Adel Tormos, tackles suicide bomber in Beirut, killing himself but saving the lives of hundreds. His daughter died with him. : pics. Nellie Bly. Early years[edit] Nellie Bly working in a factory producing boxes At birth she was named Elizabeth Jane Cochran. 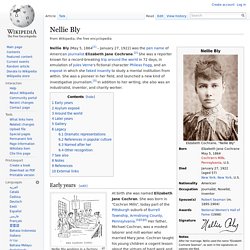 She was born in "Cochran Mills", today part of the Pittsburgh suburb of Burrell Township, Armstrong County, Pennsylvania.[4][5][6] Her father, Michael Cochran, was a modest laborer and mill worker who married Mary Jane. Malawi windmill boy with big fans. William Kamkwamba educated himself in his local library The extraordinary true story of a Malawian teenager who transformed his village by building electric windmills out of junk is the subject of a new book, The Boy Who Harnessed the Wind. 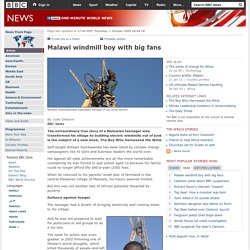 Self-taught William Kamkwamba has been feted by climate change campaigners like Al Gore and business leaders the world over. His against-all-odds achievements are all the more remarkable considering he was forced to quit school aged 14 because his family could no longer afford the $80-a-year (£50) fees. When he returned to his parents' small plot of farmland in the central Malawian village of Masitala, his future seemed limited. But this was not another tale of African potential thwarted by poverty. Defence against hunger The teenager had a dream of bringing electricity and running water to his village. And he was not prepared to wait for politicians or aid groups to do it for him. Unable to attend school, he kept up his education by using a local library.

Norman Borlaug. Norman Borlaug, the agronomist whose discoveries sparked the Green Revolution, has saved literally millions of lives, yet he is hardly a household name AMERICA has three living winners of the Nobel Peace Prize, two universally renowned and the other so little celebrated that not one person in a hundred would be likely to pick his face out of a police lineup, or even recognize his name. 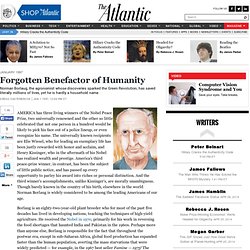 The universally known recipients are Elie Wiesel, who for leading an exemplary life has been justly rewarded with honor and acclaim, and Henry Kissinger, who in the aftermath of his Nobel has realized wealth and prestige. America's third peace-prize winner, in contrast, has been the subject of little public notice, and has passed up every opportunity to parley his award into riches or personal distinction. KKK Member Walks up to Black Musician in Bar-but It’s Not a Joke, and What Happens Next Will Astound You.

Daryl Davis is no ordinary musician. 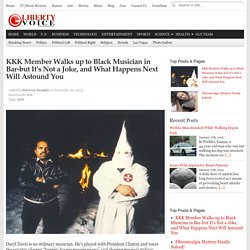 He’s played with President Clinton and tours the country playing “burnin’ boogie woogie piano” and sharing musical stylings inspired by greats like Fats Domino, Chuck Berry and Jerry Lee Lewis. He’s a highly respected and electrifying performer who is currently an integral member of The Legendary Blues Band (formerly known as the Muddy Waters Band,) and he rocks the stage all over the nation. Davis’ travels, of course, have always afforded him the opportunity to meet a huge range of diverse people, but perhaps nothing could have prepared him for the moment that would change his life. It was 1983 and Davis was playing country western music in an (informally) all-white lounge. PMuUcJn.jpg (JPEG Image, 571 × 720 pixels) Frances Oldham Kelsey. Frances Kathleen Oldham Kelsey, Ph.D., M.D., (born 24 July 1914) is a pharmacologist, most famous as the reviewer for the U.S. 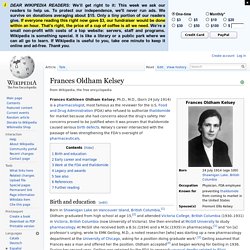 Food and Drug Administration (FDA) who refused to authorize thalidomide for market because she had concerns about the drug's safety. Her concerns proved to be justified when it was proven that thalidomide caused serious birth defects. Kelsey's career intersected with the passage of laws strengthening the FDA's oversight of pharmaceuticals. Birth and education[edit] Early career and marriage[edit] Kelsey (age 87) at the FDA Reception commemorating her induction into the National Women's Hall of Fame Upon completing her Ph.D., Oldham joined the University of Chicago faculty. Titanic Engineers. Be thou faithful unto death and I will give thee a crown of life. 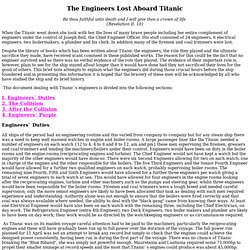 {Revelation II. 10} When the Titanic went down she took with her the lives of many brave people including her entire complement of engineers under the control of Joseph Bell, the Chief Engineer Officer. His staff consisted of 24 engineers, 6 electrical engineers, two boilermakers, a plumber and his clerk. John Rabe. John Heinrich Detlev Rabe (November 23, 1882 – January 5, 1950) was a German businessman who is best known for his efforts to stop the atrocities of the Japanese army during the Nanking Occupation and his work to protect and help the Chinese civilians during the event. 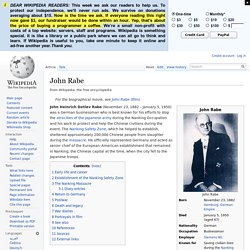 The Nanking Safety Zone, which he helped to establish, sheltered approximately 200,000 Chinese people from slaughter during the massacre. He officially represented Germany and acted as senior chief of the European–American establishment that remained in Nanking, the Chinese capital at the time, when the city fell to the Japanese troops. Early life and career[edit] Born in Hamburg on November 23,1882, Rabe pursued a career in business and went to Africa for several years.