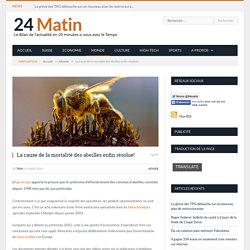 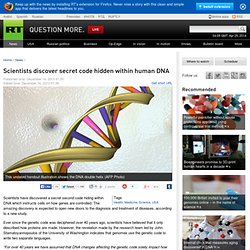 The amazing discovery is expected to open new doors to the diagnosis and treatment of diseases, according to a new study. Ever since the genetic code was deciphered over 40 years ago, scientists have believed that it only described how proteins are made. However, the revelation made by the research team led by John Stamatoyannopoulos of the University of Washington indicates that genomes use the genetic code to write two separate languages. New human body part discovered. As impossible as it may seem, two surgeons at University Hospitals Leuven have discovered an entirely new part of the human body. 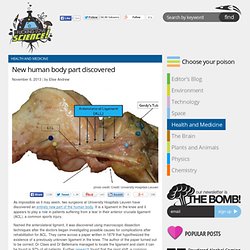 It is a ligament in the knee and it appears to play a role in patients suffering from a tear in their anterior cruciate ligament (ACL), a common sports injury. Named the anterolateral ligment, it was discovered using macroscopic dissection techniques after the doctors began investigating possible causes for complications after rehabilitation for ACL. They came across a paper written in 1879 that hypothesized the existence of a previously unknown ligament in the knee. The author of the paper turned out to be correct; Dr Claes and Dr Bellemans managed to locate the ligament and claim it can be found in 97% of all patients. The Future is Fungal: Interview with Phil Ross. Phil Ross wants to grow buildings and furniture from mushrooms Phil Ross (San Francisco) works in the realm of “biotechniques.” 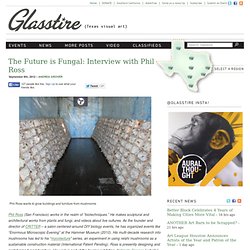 He makes sculptural and architectural works from plants and fungi, and videos about live cultures. As the founder and director of CRITTER – a salon centered-around DIY biology events, he has organized events like “Enormous Microscopic Evening” at the Hammer Museum (2010). His multi-decade research into mushrooms has led to his “mycotecture” series, an experiment in using reishi mushrooms as a sustainable construction material (International Patent Pending). Ross is presently designing and prototyping fungal furniture. Minds. Microparticles That Oxygenate Blood Created by Scientists. 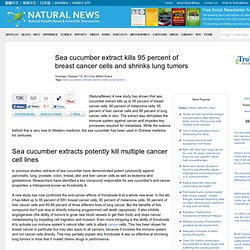 The extract also stimulates the immune system against cancer and impedes key processes required for metastasis. While the science behind this is very new to Western medicine, the sea cucumber has been used in Chinese medicine for centuries.In previous studies, extracts of sea cucumber have demonstrated potent cytotoxicity against pancreatic, lung, prostate, colon, breast, skin and liver cancer cells as well as leukemia and gioblastoma. 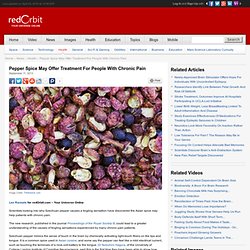 The new research, published in the journal Proceedings of the Royal Society B, could lead to a greater understanding of the causes of tingling sensations experienced by many chronic pain patients. Szechuan pepper mimics the sense of touch in the brain by chemically activating light-touch fibers on the lips and tongue. The First Gear Discovered in Nature. With two diminutive legs locked into a leap-ready position, the tiny jumper bends its body taut like an archer drawing a bow. 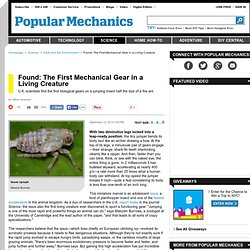 At the top of its legs, a minuscule pair of gears engage—their strange, shark-fin teeth interlocking cleanly like a zipper. And then, faster than you can blink, think, or see with the naked eye, the entire thing is gone. SIV Vaccine Success. A cytomegalovirus-based vaccine eliminated simian immunodeficiency virus from rhesus macaques, raising hopes of a similarly effective HIV vaccine. 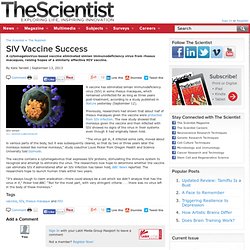 SIV virionNIH, SRIRAM SUBRAMANIAMA vaccine has eliminated simian immunodeficiency virus (SIV) in some rhesus macaques, which remained uninfected for as long as three years post-treatment, according to a study published in Nature yesterday (September 12). Previously, researchers had shown that about half of rhesus macaques given the vaccine were protected from SIV infection.

The new study showed that monkeys given the vaccine and then infected with SIV showed no signs of the virus in their systems even though it had originally taken hold. “The virus got in, it infected some cells, moved about in various parts of the body, but it was subsequently cleared, so that by two or three years later the monkeys looked like normal monkeys,” study coauthor Louis Picker from Oregon Health and Science University told Gizmodo. Autism gene stunts neurons; growth restored in mice. In a new study in Neuron, Brown University researchers report that mutation of a gene associated with some autism forms in humans can hinder the proper growth and connectivity of brain cells in mice. 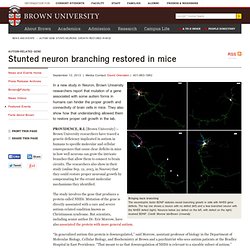 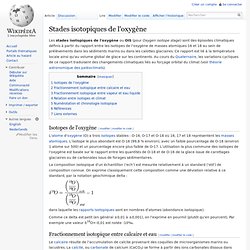 By APRIL McCARTHY, Wouldn’t it be nice to predict future events, even if they are just ten seconds ahead? According to researchers at Northwestern University, we can do just that. Living cells as you've never seen them before. Top Ten Natural Ways to Remove Heavy Metals. By Kirk Patrick (NaturalNews) Toxic heavy metals such as arsenic, cadmium, lead, mercury and uranium are pervasive in much of the environment.

While it may not be possible to completely avoid exposure there are many safe, organic and affordable products that help detoxify and eliminate these toxins from the body. This article will provide ten such examples. 1) Bentonite (Clay) – Aluminium Phyllosilicate (Montmorillonite) Bentonite clay is a form of volcanic ash that has the ability to physically remove from the body up to 25 times its weight in impurities through a process called adsorbtion . Bentonite has laxative properties and contains high levels of iron, magnesium and silicon. Researchers Control Rodent Depression With Optogenetics.

Imagine if you could switch your depression off like a light. Plus de vie privé avec les puces RFID. Scientists Create Near-Living Crystal. By Sarah Nicholls, Physicists at NYC University have this month published the results of their experiment on the lifelike behaviours of a newly-synthesized chemical compound. The scientists’ aim was to investigate self-organizing collective behaviours such as those seen in flocks of birds and schools of fish. They stated that the goal of the work was “to study how complicated collective behaviors arise from simple individual properties.” Taking hematite (a compound of iron and oxygen) as the particle basis, they added a spherical polymer coat.

Leaving a corner of the hematite particle exposed and subjecting the compound to blue light, the particles began moving, breaking apart and reforming in a ‘lifelike’ manner.