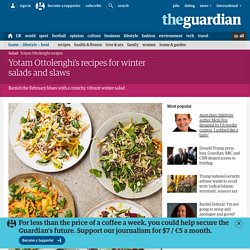 One is to turn on the oven or stove, and put on a pot to simmer away for a good few hours. I love this sort of slow, warming and hearty cooking, because it challenges the cold and grey outdoors. The other way, though, is to meet the weather head on with a riot of colour, an abundance of freshness and the wake-up call of citrus fruit. Today’s recipes for raw meals in a bowl excite me as much as stews and soups at this time of the year; in fact, they’re so quick that four out of five are practically instant, involving little more than just grating veg. They’re like the friend who opts for a bracing swim over a hot bath, the one who wears a vibrant winter coat amid the sea of black and grey. Magic dust: Yotam Ottolenghi’s za’atar recipes. Yotam Ottolenghi’s recipes for a vegetarian Christmas.

Making a meal focused on vegetables is a particular challenge at Christmas. 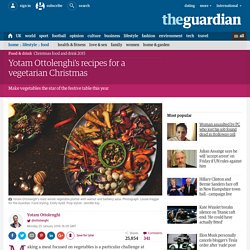 The turkey (or some other similarly hefty fowl) refuses to vacate its traditional position as the absolute ruler of the holiday’s smörgåsbord, though, for me, that’s way more about style than any real substance. If we are honest, isn’t it the sheer size and golden splendour that make the turkey the perennial leader of the Christmas pack? It can’t be about complexity of flavour and succulence – or have I been missing something all these years? So, this Christmas, I’ve decided to give the “turkey treatment” to my root vegetables, and put them on a pedestal, positioning them at the very centre of the table, all crowded proudly on a huge, shimmering platter. I just know they’ll come out on top, the newly crowned, undisputed rulers of the festive table. Roast winter vegetable platter with walnut and barberry salsa The barberries in the salsa provide the sort of bursts of surprise that I love in a festive dish. Yotam Ottolenghi. A meeting with a passionate Iranian cook has pushed me to make more use of some core ingredients of this wonderful cuisine. 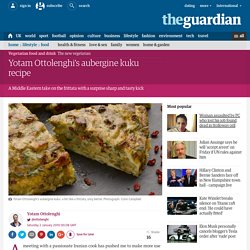 Dried barberries (zereshk in Persian) are sold in Middle Eastern and Asian grocers. Their extreme sharpness is often used to create little "surprises" in pilavs, and our salads at Ottolenghi have recently benefited greatly from them. Kuku, which is similar to frittata, is great served at room temperature with a salad on the side. If you can't get barberries, add a tablespoon of lime juice to the mix instead. Serves six. 120ml sunflower oil, plus extra3 medium onions, peeled and sliced3 medium aubergines, peeled5 free-range eggs2 tbsp plain flour1½ tsp baking powder25g chopped parsley, plus extra to garnish1 tsp saffron strands, dissolved in 1 tbsp of hot water3 garlic cloves, peeled and crushed½ tsp saltBlack pepper20g dried barberries, rinsed and dried Heat the oven to 190C/375F/gas mark 5.

Remove from the oven and set aside to cool. Udon noodles with miso and walnuts recipe. The deep sweetness and intensity produced by miso paste, combined with other Japanese staples, are guaranteed to put a smile on an overcast winter face. 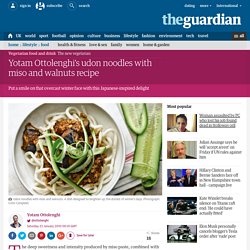 A decent ­vegetarian dashi can be made by boiling kombu, an edible kelp, for just five minutes (buy it at oriental or healthfood stores). Serves four. The new vegetarian: Yotam Ottolenghi prepares Quinoa salad with dried Iranian lime. This was inspired by a dish at Orna And Ella, a favourite cafe in Tel Aviv. 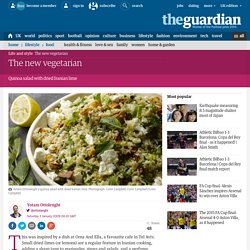 Small dried limes (or lemons) are a regular feature in Iranian cooking, adding a sharp tang to marinades, stews and salads, and a perfumy, sweetish aroma. Trouble is, they're rock solid and hard to grind. In stews, puncture the limes and put them in whole; or buy them in powder form, although that isn't as pungent. To grind them yourself, a spice or coffee grinder is your best bet. I get my dried limes online at thespiceshop.co.uk and maroque.co.uk; they're also sold in Middle Eastern grocers. Preheat the oven to 200C/400F/gas mark 6. Meanwhile, cook the rice as per the packet instructions. Heat the remaining oil in a small frying pan, then fry the garlic for 30 seconds, or until it turns light golden. Tip the contents of the pan over the rice and quinoa, then stir in the roasted sweet potato and its oil.

. • Yotam Ottolenghi is chef/patron of Ottolenghi in London. On eating seasonally and roasted nectarines with cardamom honey. I tossed and turned thinking about this post last night. 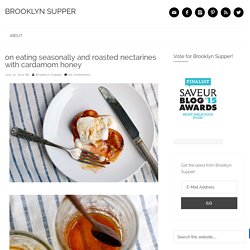 There are so many things to share and so many stories to tell. The short version is, I spent the weekend at the Big Summer Potluck, met a million fantastic, warm, funny, inspiring and talented bloggers, had a great time (delighted to be away from my girls for a little bit), and got inspired. Also, today is my birthday. Brooklyn Supper began as a way to share the food my husband Brian and I loved. Ottolenghi. OTTOLENGHI QUINOA&CELERY ROOT. OTTOLENGHI.