"You are born alone. You die alone. The value of the space in between is trust and love. That is why geometrically speaking the circle is a one. Everything comes to you from the other. You have to be able to reach the other. If not you are alone…" Louise Bourgeois

People Prefer Electric Shocks to Being Alone With Their Thoughts. Considering the many challenges life has to offer, entertaining yourself with your own thoughts for a few minutes seems like one of the easier hurdles to overcome. 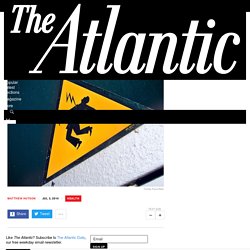 You could recall your favorite childhood memory, plan your weekend, or try to solve a problem from work. But it turns out that people find this assignment incredibly hard. And, according to new research, they’ll even resort to giving themselves electric shocks to keep themselves entertained. “We, like everyone else, noticed how wedded people seem to be to modern technology, and seem to shy away from just using their own thoughts to occupy themselves,” the lead researcher, Timothy Wilson of the University of Virginia, told me.

“That got us to wondering whether this said something fundamental about people’s ability to do this.” “So we started out just kind of by the seat of our pants trying stuff to see how easy it was for people to entertain themselves with their own thoughts,” he went on. They report on 11 experiments. The Fear of Being Alone. ‘All men’s miseries derive from not being able to sit in a quiet room alone.’ 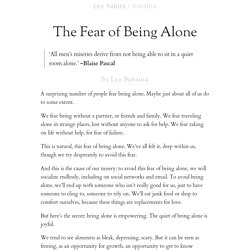 ~Blaise Pascal By Leo Babauta A surprising number of people fear being alone. Maybe just about all of us do to some extent. We fear being without a partner, or friends and family. This is natural, this fear of being alone. And this is the cause of our misery: to avoid this fear of being alone, we will socialize endlessly, including on social networks and email. But here’s the secret: being alone is empowering. We tend to see aloneness as bleak, depressing, scary. This is something I’ve been learning the hard way. Sit quietly for a minute, now, and turn inward. Can you accept yourself, when you look closely at yourself? Can you see the beauty in yourself, as you learn something new? The Real Reason Smart People Tend To Be Loners. People with high intelligence proved to be a fascinating exception to the usual rule. 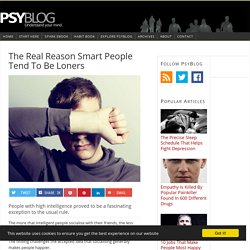 The more that intelligent people socialise with their friends, the less satisfied they are with life, new research finds. The finding challenges the accepted idea that socialising generally makes people happier. It may be that for some people — especially those with high intelligence — socialising does not increase life satisfaction. The possible reason why is intriguing… The long-term study followed adults aged between 18 and 28-years-old. It looked at the density of the population and people’s satisfaction with life. The results showed that, in general, people who lived in less densely populated areas were more satisfied with life. As the authors themselves explain: “Residents of rural areas and small towns are happier than those in suburbs, who in turn are happier than those in small central cities, who in turn are happier than those in large central cities.”

Arm face image from Shutterstock. Artist Louise Bourgeois on How Solitude Enriches Creative Work. “Nourish yourself with grand and austere ideas of beauty that feed the soul… Seek solitude,” young Delacroix counseled himself in 1824. Keats saw solitude as a sublime conduit to truth and beauty. Elizabeth Bishop believed that everyone should experience at least one prolonged period of solitude in life. Even if we don’t take so extreme a view as artist Agnes Martin’s assertion that “the best things in life happen to you when you’re alone,” one thing is certain: Our capacity for what psychoanalyst Adam Phillips has termed “fertile solitude” is absolutely essential not only for our creativity but for the basic fabric of our happiness — without time and space unburdened from external input and social strain, we’d be unable to fully inhabit our interior life, which is the raw material of all art.

After the tremendous effort you put in here, solitude, even prolonged solitude, can only be of very great benefit. A few months later, Bourgeois reiterates her counsel: Is It Solitude or Loneliness?: 4 Questions to Help You Tell. Need for Intimacy. Self-Awareness. Introvert & Extrovert. The Power of Silence. Lucidity. Self-Doubt. Test Anxiety.

10 Things to Try When You’re Feeling Lonely. Will Social Prescribing Be the Next Wellness Phenomenon? Loneliness Has an Antidote. You’ll Never Guess What It Is. 5 Reasons to Stop Worrying About Being Single. Reasons to Remain Single. Digital Addiction. Closeness and Connection. Love. Singing.