In reality, most of us exhibit qualities of both and fall somewhere between the two. Rather than existing as a clear cut label, extroversion is regarded as a spectrum with individuals exhibiting a range of behaviors associated with both.

The Introvert-Extrovert spectrum, like many continuous dimensions within psychology, represents a way in which we can classify something in terms of its position on a scale between two extreme points. In this case an individual’s innate tendency to respond to stimuli in a certain fashion. Social Nourishment + Restorative Solitude = Human Thriving. Source: Pixabay Humans thrive on a smorgasbord of "social nutrition" that includes both restorative alone time and meaningful social interactions, according to a new study. 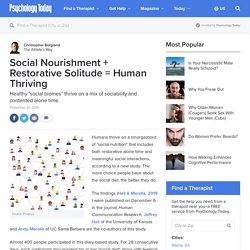 The more choice people have about the social diet, the better they do. The findings (Hall & Merolla, 2019) were published on December 6 in the journal Human Communication Research. Jeffrey Hall of the University of Kansas and Andy Merolla of UC Santa Barbara are the co-authors of this study. article continues after advertisement Almost 400 people participated in this diary-based study. "Your social biome can be thought of as homeostatic social system," Hall said in a news release. Most people's "social biome" includes hanging out with friends or family, casual small talk with random strangers, occasional heart-to-heart conversations, periods of solitude, and more. This animated YouTube video sums up what Hall and Merolla discovered while mapping social biomes. What Is the Communicate Bond Belong (CBB) Theory? Introvert vs Extrovert: A Look at the Spectrum and Psychology. Extraversion and introversion. The trait of extraversion–introversion is a central dimension of human personality theories. 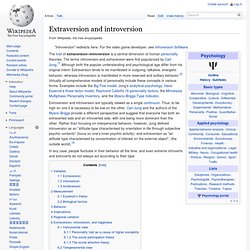 The terms introversion and extraversion were first popularized by Carl Jung,[1] Although both the popular understanding and psychological age differ from his original intent. Extraversion tends to be manifested in outgoing, talkative, energetic behavior, whereas introversion is manifested in more reserved and solitary behavior.[2] Virtually all comprehensive models of personality include these concepts in various forms. Examples include the Big Five model, Jung's analytical psychology, Hans Eysenck's three-factor model, Raymond Cattell's 16 personality factors, the Minnesota Multiphasic Personality Inventory, and the Myers–Briggs Type Indicator. In any case, people fluctuate in their behavior all the time, and even extreme introverts and extroverts do not always act according to their type. 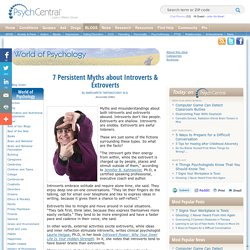 Introverts don’t like people. Extroverts are shallow. Introverts are snobby. Extroverts are awful listeners. These are just some of the fictions surrounding these types. Are You an Ambivert? I have always struggled with the question: “Are you an extrovert or introvert?” 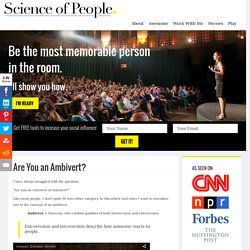 Like most people, I don’t quite fit into either category. In this article and video I want to introduce you to the concept of an ambivert: Ambivert: n Someone who exhibits qualities of both introversion and extroversion. Extroversion and introversion describe how someone reacts to people. Research has found that how we react to people is physiological. We can also self-select our tendency towards extroversion. I am drawn to people, I get energy from social gatherings and am pretty outgoing. I will use the terms as labels for the sake of the article, but let’s get one thing straight: It’s Not a Label, It’s a Spectrum.

Ambiverts, Problem-Finders, and the Surprising Secrets of Selling Your Ideas. Whether it’s “selling” your ideas, your writing, or yourself to a potential mate, the art of the sell is crucial to your fulfillment in life, both personal and professional. 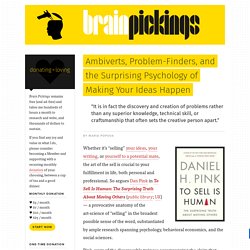 So argues Dan Pink in To Sell Is Human: The Surprising Truth About Moving Others (public library; UK) — a provocative anatomy of the art-science of “selling” in the broadest possible sense of the word, substantiated by ample research spanning psychology, behavioral economics, and the social sciences. Pink, wary of the disagreeable twinges accompanying the claim that everyone should self-identify as a salesperson, preemptively counters in the introduction: I’m convinced we’ve gotten it wrong.This is a book about sales. But it is unlike any book about sales you have read (or ignored) before. That’s because selling in all its dimensions — whether pushing Buicks on a lot or pitching ideas in a meeting — has changed more in the last ten years than it did over the previous hundred. Relational Needs. Solitude.