Let Go, Let Gov (Season 17, Episode 1. 40 Years of Complete Isolation (Part 1/4) A Message to Young People from Andrei Tarkovsky. The Rise of the New Groupthink. Social Media And The Loss Of Uncorrelated Wisdom. First Theater, Then Facebook. In 2010, two Harvard psychologists, Matthew Killingsworth and Daniel Gilbert, performed a study that used an iPhone app to ask volunteers, at random moments, what they were doing and how happy they were. 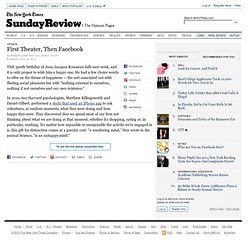 David Foster Wallace: The future of fiction in the information age. Susan Cain: The power of introverts. How Google Dominates Us by James Gleick. In the Plex: How Google Thinks, Works, and Shapes Our Lives by Steven Levy Simon and Schuster, 424 pp., $26.00 I’m Feeling Lucky: The Confessions of Google Employee Number 59 by Douglas Edwards Houghton Mifflin Harcourt, 416 pp., $27.00. 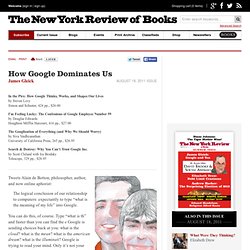 I am Facebook friends with Ryan Lanza. I woke up late Friday morning and posted my latest comic before realizing no one would be talking about it or any other issue that day except the latest massacre unfolding before our eyes – this time involving children. Not “this time.” I mean “again.” As I had done not one week earlier when there was a mass shooting a few miles from my home in Portland, I watched the real time updates, trying to wrap my mind around being a part of the human race. CNN named Ryan Lanza as the suspect before noon based on a police source. Aldous Huxley interview-1958.

The End of Solitude - The Chronicle Review. What does the contemporary self want? 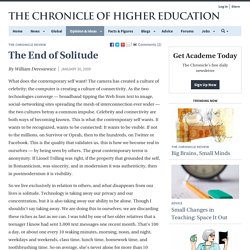 The camera has created a culture of celebrity; the computer is creating a culture of connectivity. As the two technologies converge — broadband tipping the Web from text to image, social-networking sites spreading the mesh of interconnection ever wider — the two cultures betray a common impulse. Celebrity and connectivity are both ways of becoming known. This is what the contemporary self wants. The Joy of Quiet. Our Fear of Silence. The cultivation of mindfulness requires periods of focused attention. 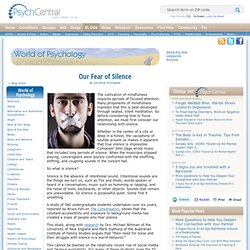 Many proponents of mindfulness maintain that this is best developed through seated, silent meditation. So before considering how to focus attention, we must first consider our relationship with silence. Whether in the center of a city or deep in a forest, the cacophony of sounds around us makes it apparent that true silence is impossible. Composer John Cage wrote music that included long periods of silence. Your Brain on Computers - Digital Devices Deprive Brain of Needed Downtime. Social Media-Connected Teens Seek Time Offline [STUDY] Today's American teenagers are digital natives — connected to the Internet since youth. 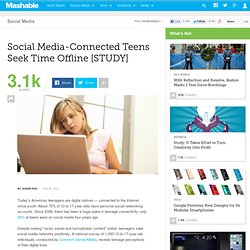 About 75% of 13 to 17-year-olds have personal social networking accounts. Morgan Harris - St Vincent's inspiration from isolation. Solitude and Leadership. Essays - Spring 2010 Print If you want others to follow, learn to be alone with your thoughts By William Deresiewicz The lecture below was delivered to the plebe class at the United States Military Academy at West Point in October 2009. 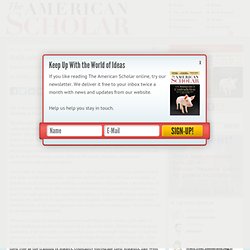 Meditation Isn't Just About Inner Peace—in the Valley It's About Getting Ahead. Repeated studies have demonstrated that meditation can rewire how the brain responds to stress.

Boston University researchers showed that after as little as three and a half hours of meditation training, subjects tend to react less to emotionally charged images. Other research suggests that meditation improves working memory and executive function. And several studies of long-term practitioners show an increased ability to concentrate on fast-changing stimuli. Do Not Despise Your Inner World: Advice on a Full Life from Philosopher Martha Nussbaum. Sherry Turkle: Connected, but alone? Digital Nation - Life On The Virtual Frontier. You Have 0 Friends (Season 14, Episode 4. Everything's Amazing & Nobody's Happy. Louis C.K.'s Girls Can't Have Cell Phones. 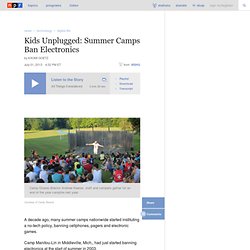 Courtesy of Camp Sloane A decade ago, many summer camps nationwide started instituting a no-tech policy, banning cellphones, pagers and electronic games. Camp Manitou-Lin in Middleville, Mich., had just started banning electronics at the start of summer in 2003. Back then, 11-year-old Michael Lake of Grand Rapids was not so enthusiastic about the new policy. "I live on my Game Boy. Cut to 2013, and the Xbox, Instagram, iPhone and iPad. The Personal Television Revolution Is Horrifying — And Brilliant.

Students at the University of Illinois at Urbana-Champaign gather around a television in this undated photo. 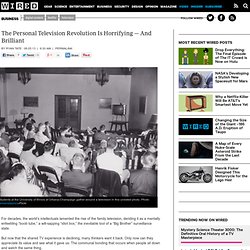 Photo: universityymca/Flickr. The Documented Life. Could You Be Addicted To The Internet? [POLL] Unlike drugs and alcohol, excess Internet usage could help your career, make you more informed and keep you up-to-date with the latest hilarious memes. 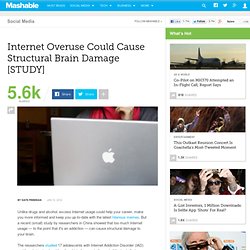 But a recent (small) study by researchers in China showed that too much Internet usage — to the point that it's an addiction — can cause structural damage to your brain. The researchers studied 17 adolescents with Internet Addiction Disorder (IAD) and found structural and functional interference in the part of the brain that regulates organization, possibly causing cognitive impairment similar to that caused by gambling and alcoholism.

Here's the science behind it: White matter is composed of nerve cells, while the gray matter that we hear so much about is made up of cell bodies. Myelin is a type of fat in the white part (nerve-heavy area) of the brain. This fat insulates the white matter in the brain and makes the transmission speed between nerve signals fast. Did you know? Interesting Facts about the world and technology. A Network Head Reflects In 'Interview' Hide captionDavid Westin was the president of ABC News from 1997 to 2010. Rene Macura/AP David Westin was the president of ABC News from 1997 to 2010. On Nov. 7, 2000, producers and editors at ABC News prepared to make a very public decision. It was election night, with George W.

Bush facing off against Al Gore. David Westin, then the president of ABC News, recalls the agony as his network's elaborate election unit was beaten on the call — they had held back. And then came more agony for Westin, after his network finally went along with everybody else, prematurely calling the election for Gore and then for Bush. Bush did win, after a Supreme Court ruling more than 30 days later, but the reality on that night was an election too close to call. "We had worked really hard at getting it right.