Understanding the Dimensions of Introversion & Shyness. Shyness and introversion are commonly mistaken as being the same thing. 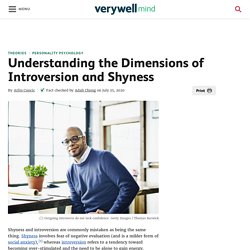 Shyness involves fear of negative evaluation (and is a milder form of social anxiety),1 whereas introversion refers to a tendency toward becoming over-stimulated and the need to be alone to gain energy. The opposite of shyness is being outgoing, while the opposite of introversion is extroversion. These concepts are similar but different. The outgoing person is not afraid of others and has a tendency to approach—be it at a party, when meeting someone new, or when making plans with friends. The extrovert appears similar, often making friends easily. Are All Introverts Shy? People mistakenly think that all introverts are shy wallflowers when this couldn’t be further from the truth. 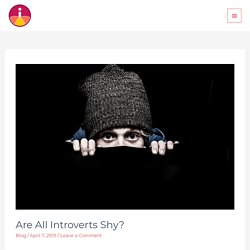 Introverts come in all different flavors just like most personalities, but overall they are not typically shy. Overcome Social Awkwardness. Last week we began a three-part series on how to overcome shyness — a feeling of social anxiety and discomfort that can hold us back from forming warm relationships, reaching our goals, and just enjoying life in general. 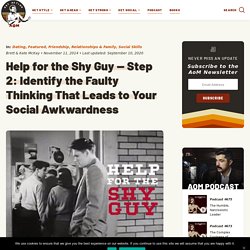 In the last post, we explored the nature of shyness including its roots and symptoms. We ended by discussing some of the causes of shyness, and noted that faulty thinking about socializing is the most significant one. Today we will examine in greater detail the self-sabotaging mindset that leads to shyness. Framing our social interactions with faulty beliefs contributes to shy feelings and behaviors in two ways. First, faulty thinking makes social encounters seem more stressful and threatening than they actually are. How to Overcome Shyness. For the last couple of weeks we’ve been exploring the subject of shyness. 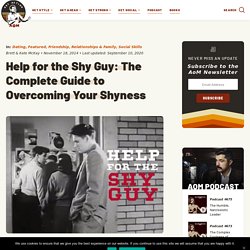 In our first post, we talked about the nature of shyness and its symptoms. In last week’s article, we outlined the faulty thinking that leads to self-consciousness and anxiety, which in turn fuels shy feelings and the desire to avoid socializing. Today we’re going to take the points we’ve made so far, and connect them with action steps grounded in cognitive behavioral therapy. Understanding Shyness. There’s a girl in your political science class that you’re attracted to. 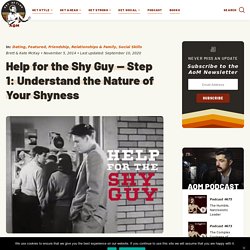 You’d like to get to know her better, but the thought of even saying hello makes you sick to your stomach. You’re at the grocery store and you see a colleague from work pushing a cart with his kids. Instead of saying hi and taking part in some small talk, you turn your cart the other direction and do what you can to avoid him. Apparently There Are 4 Kinds of Introversion. Introversion, thanks largely to Susan Cain's 2012 best seller Quiet, is having something of a cultural moment. 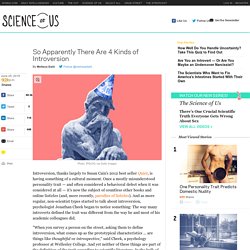 Once a mostly misunderstood personality trait — and often considered a behavioral defect when it was considered at all — it's now the subject of countless other books and online listicles (and, more recently, parodies of listicles). And as more regular, non-scientist types started to talk about introversion, psychologist Jonathan Cheek began to notice something: The way many introverts defined the trait was different from the way he and most of his academic colleagues did.

"When you survey a person on the street, asking them to define introversion, what comes up as the prototypical characteristics ... are things like thoughtful or introspective," said Cheek, a psychology professor at Wellesley College. Theconversation. Tear-jerkers such as Adele’s Someone Like You frequently top the charts these days, while gloomy classical compositions like Mozart’s Requiem have moved people for centuries. 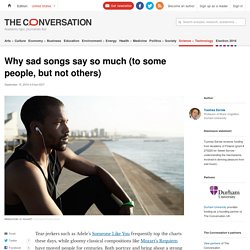 Both portray and bring about a strong sense of loss and sadness. But our enjoyment of sad music is paradoxical – we go out of our way to avoid sadness in our daily lives. So why is it that, in the arts, themes such as loss can be safely experienced, profoundly enjoyed and even celebrated? Researchers have long been puzzled about this phenomenon and it’s not until fairly recently that we have started to gain some insight into how we enjoy music. Now, a new study by colleagues and me, published in Frontiers in Psychology, has discovered why some of us enjoy sad music more than others – and it’s got a lot to do with empathy. Future - Why blushing may be good for you. We’ve all said something stupid or regretful before, so we know how much worse it is when you feel that sudden heat in your face and realise your cheeks are visibly burning red. 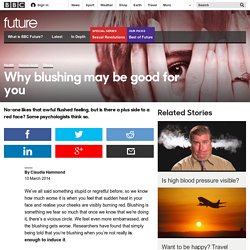 Blushing is something we fear so much that once we know that we’re doing it, there’s a vicious circle. We feel even more embarrassed, and the blushing gets worse. Future - The surprising perks of being easily embarrassed. A few days into my first job, a colleague walked into my team’s office to complain about a “situation” with the toilet. 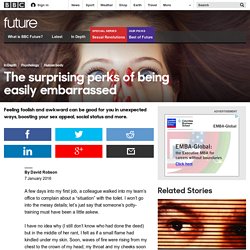 I won’t go into the messy details; let’s just say that someone’s potty-training must have been a little askew. I have no idea why (I still don’t know who had done the deed) but in the middle of her rant, I felt as if a small flame had kindled under my skin. Soon, waves of fire were rising from my chest to the crown of my head; my throat and my cheeks soon became mottled with a livid pink, while my ears were as red as radishes. No one actually accused me of the misdemeanour – but their eyes said everything. They weren’t to know that I could flare up at the drop of a hat. Future - Why we should celebrate shyness. If you are ever overcome by feelings of self-doubt, just remember Agatha Christie. 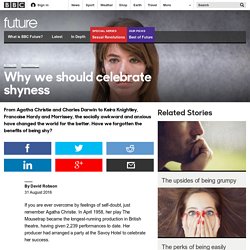 In April 1958, her play The Mousetrap became the longest-running production in British theatre, having given 2,239 performances to date. 9 Habits Of Highly Emotionally Intelligent People. When emotional intelligence first appeared to the masses, it threw a massive wrench into what many people had always assumed was the sole source of success—IQ. How much of an impact does emotional intelligence (EQ) have on your personal and professional success? The short answer is: a lot! It’s a powerful way to focus your energy in one direction with a tremendous result. Emotional intelligence is the “something” in each of us that is a bit intangible. It affects how we manage behavior, navigate social complexities, and make personal decisions that achieve positive results. Personal competence comprises your self-awareness and self-management skills, which focus more on you individually than on your interactions with other people. Sensitive Person Like Me? Here Are Five Tips!

*photo by Sabrina Hill. 13 Struggles That People Who Are Hard On Themselves Would Understand. Being a person who is hard on himself or herself is very challenging. Some people think that we create our own problems by being hard on ourselves. The thing is it’s not natural for us to be kind to ourselves. We didn’t learn how to be compassionate to ourselves when we were young. Here are 15 struggles that we people who are hard on ourselves would understand. 10-things-only-people-who-are-hard-themselves-can-understand?mtype=daily_newsletter&mid=20160324_customized&uid=757365&email=puhnner@hotmail. Everyone knows the feeling of being under pressure — having deadlines at work, throwing an event, trying to achieve lofty goals. But for some of us, most of the pressure comes from ourselves. We push ourselves to achieve more and more, and the idea of failure stresses us out.

We love the feeling of doing a great job, but we often beat ourselves up over the little things. 10 Things That Introverts Have The Hardest Time With. The fact that I’m writing this from the confines of my bedroom with only my cat around to distract me should be enough to convince you that I’m an authority on introversion. This is not to say that I avoid people at all costs, or am some sort of misanthrope. I definitely enjoy the company of good friends and my family. 19 Real Life Examples of An Extroverted Introvert So You Don't Get Confused. Huffingtonpost. Future - Why blushing may be good for you. Future - The surprising perks of being easily embarrassed. Untitled. 17 Interesting Graphs That Define The Life Of An Introvert. 23 Body Language Tricks That Make You Instantly Likeable. 24 Signs You're An Introvert- Not Shy.

Many people believe introversion and shyness are one and the same, but this is not true. 10 Thoughts Introverts Have About Parties. 10+ Funny Comics That Only Introverts Will Understand. Test for Social Anxiety Disorder: Find out if you suffer from Social Phobia. What Is Social Anxiety Disorder? Symptoms, Treatments, & More. Social anxiety disorder, also called social phobia, is an anxiety disorder in which a person has an excessive and unreasonable fear of social situations.

Anxiety (intense nervousness) and self-consciousness arise from a fear of being closely watched, judged, and criticized by others. A person with social anxiety disorder is afraid that he or she will make mistakes, look bad, and be embarrassed or humiliated in front of others. The fear may be made worse by a lack of social skills or experience in social situations. The anxiety can build into a panic attack. As a result of the fear, the person endures certain social situations in extreme distress or may avoid them altogether.

People with social anxiety disorder suffer from distorted thinking, including false beliefs about social situations and the negative opinions of others. People with social anxiety disorder may be afraid of a specific situation, such as speaking in public. What Are the Symptoms of Social Anxiety Disorder? Dating Advice For Introverts: How Being An Introvert Helps You In Love. The Must Know Gateway To Master Your Social Skills - Self Development Workshop. One Minute Personality Test: Are You An Introvert, Extrovert or Something Else? Towards an invisible and confident body. Researcher Zakaryah creates the illusion of an invisible body for the test person on the left. The participant is wearing virtual reality goggles which produce images in 3D that are projected by the camera on the right.

The experimenter triggers the illusion by touching the test person with a brush. Shyness.com - The Henderson/Zimbardo Shyness Questionnaire. Shyness cannot be ‘cured’ – Joe Moran. If I had to describe being shy, I’d say it was like coming late to a party when everyone else is about three glasses in. All human interaction, if it is to develop from small talk into meaningful conversation, draws on shared knowledge and tacit understandings. Finally, Some Unflattering Research About Introverts. Introverts have many wonderful qualities that help them shine in the workplace. They have a capacity for deep thought and meaningful (if fewer) relationships, they are able to intensely focus on important tasks and they have heightened emotional sensitivity, to name a few.

But when it comes to supporting the success of their extroverted colleagues, introverts may fall short. Help for the Shy Guy: The Complete Guide to Overcoming Your Shyness. Help for the Shy Guy — Step 2: Identify the Faulty Thinking That Leads to Your Social Awkwardness. INFP Relationships. Succeed Through Using Your Senses by Ron Kurtus - School for Champions. The Introvert Personality - Self Help Sanctum. 7 Success Tips for Introverts. The Myers & Briggs Foundation - Extraversion or Introversion. Kindness Really Does Make You More Attractive. 10 Ways Introverts Interact Differently With The World.