Known to many people as the “feel good” brain chemical, dopamine was previously thought to be a reward itself.

Recent studies, however, have shown it’s actually more closely tied to motivation—meaning dopamine inspires you to seek out a reward, rather than acting as a reward itself.

When we think about our impact on others or directly help someone else, we get a boost of the “happiness trifecta” of neurotransmitters: oxytocin, dopamine, and serotonin.

Do You Need More Happy Brain Chemicals? Do you ever wish you could just turn on the happy chemicals in your brain? 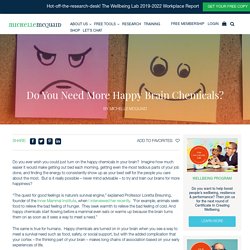 Imagine how much easier it would make getting out bed each morning, getting even the most tedious parts of your job done, and finding the energy to consistently show up as your best self for the people you care about the most. But is it really possible – never mind advisable – to try and train our brains for more happiness? “The quest for good feelings is nature’s survival engine,” explained Professor Loretta Breuning, founder of the Inner Mammal Institute, when I interviewed her recently. “For example, animals seek food to relieve the bad feeling of hunger. They seek warmth to relieve the bad feeling of cold. The same is true for humans. “The feeling we call ‘happiness’ comes from four special brain chemicals: dopamine, endorphins, oxytocin, and serotonin,” explained Loretta. Each happy chemical triggers a different good feeling. Loretta suggested trying: Serotonin. Monoamine neurotransmitter Serotonin ([6][7][8]) or 5-hydroxytryptamine (5-HT) is a monoamine neurotransmitter. 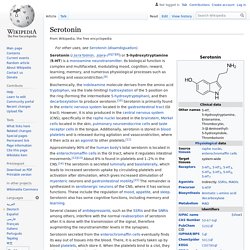 Endorphins. Endorphins (contracted from "endogenous morphine"[1][2]) are endogenous opioid neuropeptides and peptide hormones in humans and other animals. 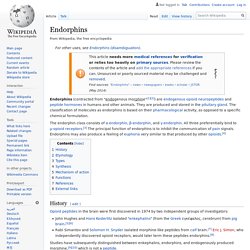 They are produced and stored in the pituitary gland. The classification of molecules as endorphins is based on their pharmacological activity, as opposed to a specific chemical formulation. The endorphin class consists of α-endorphin, β-endorphin, and γ-endorphin. All three preferentially bind to μ-opioid receptors.[3] The principal function of endorphins is to inhibit the communication of pain signals. Endorphins may also produce a feeling of euphoria very similar to that produced by other opioids.[4] History[edit] Opioid peptides in the brain were first discovered in 1974 by two independent groups of investigators: Studies have subsequently distinguished between enkephalins, endorphins, and endogenously produced morphine,[9][10] which is not a peptide. 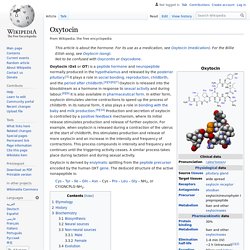 Oxytocin is normally produced in the hypothalamus and released by the posterior pituitary.[3] It plays a role in social bonding, sexual reproduction, childbirth, and the period after childbirth.[4] Oxytocin is released into the bloodstream as a hormone in response to stretching of the cervix and uterus during labor and with stimulation of the nipples from breastfeeding.[5] This helps with birth, bonding with the baby, and milk production.[5][6] Orexin. Orexin (/ɒˈrɛksɪn/), also known as hypocretin, is a neuropeptide that regulates arousal, wakefulness, and appetite.[1] The most common form of narcolepsy, in which the sufferer experiences brief losses of muscle tone (cataplexy), is caused by a lack of orexin in the brain due to destruction of the cells that produce it.[2][3] Orexin was discovered in 1998 almost simultaneously by two independent groups of researchers working on the rat brain.[6][7] One group named it orexin, from orexis, meaning "appetite" in Greek; the other group named it hypocretin, because it is produced in the hypothalamus and bears a weak resemblance to secretin, another peptide.[2] The use of both terms is now a practical necessity, as hypocretin is used to refer to the genetic products and orexin is used to refer to the protein products.[8] There is a high affinity between the orexin system in the rat brain and that in the human brain.[5] Discovery[edit] Isoforms[edit] Function[edit] Brown fat activation[edit] 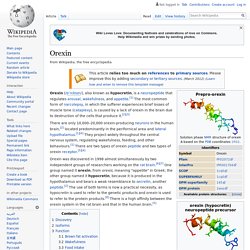 Neurotransmitter Linked to Pleasure & Reward in Brain. Orexin, also known as hypocretin, is a neurotransmitter discovered in 1998 which is produced in the hypothalamus region of the brain that is involved in wakefulness and arousal. 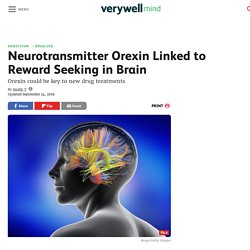 Because of its role related to sleep, orexin has been targeted as a treatment for sleep disorders. Medications known as "orexin receptor antagonists" have been developed to block the signaling of the chemical in the brain to promote sleep. Because orexin plays a role in keeping us awake and alert, blocking its effects could potentially improve sleep. The U.S. Food and Drug Administration has approved suborexant (Belsomra), an orexin receptor antagonist, as a sleeping aid. Now scientists have found that orexin may also play a role in reward-seeking, drug relapse, and addiction and therefore may lead to new treatments for drug addiction.

"The lateral hypothalamus has been tied to reward and pleasure for decades, but the specific circuits and chemicals involved have been elusive," says Aston-Jones. Dopamine. Endorphins. Reward System.