Viewer - Life of the Buddha. Karmapa – The Official Website of the 17th Karmapa. Gompa - Tibetan Monastery Services - Welcome. Kagyu Monlam - Videos. A point of view. Following the recent letter sent by some of Sogyal Rinpoche's students about his behaviour, I have been contacted by several media outlets. 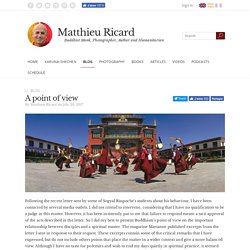 I did not intend to intervene, considering that I have no qualification to be a judge in this matter. However, it has been insistently put to me that failure to respond meant a tacit approval of the acts described in the letter. So I did my best to present Buddhism’s point of view on the important relationship between disciples and a spiritual master. The magazine Marianne published excerpts from the letter I sent in response to their request. These excerpts contain some of the critical remarks that I have expressed, but do not include others points that place the matter in a wider context and give a more balanced view. Feed the Birds - FPMT. What Is Emptiness? — Study Buddhism.

Voidness (Skt. shunyata), more commonly known as “emptiness” in English, is one of the main insights of Buddha. 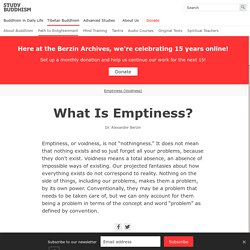 Buddha realized that the deepest source of everyone’s problems in life is their confusion about how they, others and everything exists. Their minds project impossible ways of existing onto everything. Unaware that what they project does not correspond to reality, people create problems and sufferings for themselves out of ignorance. For example, if we project on ourselves that we are losers and no matter what we do, we will never succeed in life, then not only do we become depressed with low self-esteem, but lacking self-confidence, we might even give up trying to improve our lot. We resign ourselves to a lowly position in life. Voidness means a total absence, an absence of an actual way of existing that corresponds to what we instinctively project. Global Buddhist Television Network. The Tibetan Buddhist Learning Center: Community Outreach. The Tibetan Book of Living and Dying. Year of the Fire Monkey Greeting by DJKR « Khyentse Foundation. Dear Friends, Rinpoche composed a message for the global SI/KF community on the eve of the Lunar New Year, the year of the male fire monkey. 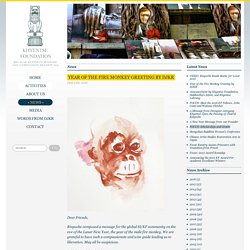 We are grateful to have such a compassionate and wise guide leading us to liberation. May all be auspicious. With best wishes for the new year, The KF and SI Team Let Us Remember: A Message from Rinpoche Greetings to all who are celebrating the Monkey New Year, Let us trust the Buddha, Dharma, and Sangha, and let us trust the law of cause, condition, and effect. Let us be kind and considerate. Let us be generous, not just with money or diamonds but with our time and space and information. Negi Lama Tenzin Gyaltsen – A preliminary account of the life of a modern Buddhist saint by Thierry Dodin. Thierry Dodin Institute of Central Asian Studies, Bonn University Summary Negi Lama (1894–1977) of Kinnaur, though never a monk, was one of the foremost Buddhist scholars of his time. 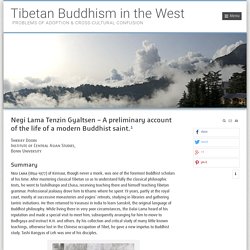 After mastering classical Tibetan so as to understand fully the classical philosophic texts, he went to Tashilhunpo and Lhasa, receiving teaching there and himself teaching Tibetan grammar. Professional jealousy drove him to Khams where he spent 19 years, partly at the royal court, mostly at successive monasteries and yogins’ retreats, studying in libraries and gathering tantric initiations. He then returned to Varanasi in India to learn Sanskrit, the original language of Buddhist philosophy. Tenzin Gyaltsen (bstan 'dzin rgyal mtshan), also known under various other names like Kunu (khu nu) Rinpoche, Kunu Lama and Negi Lama (ne gi bla ma) © Rigpa Wiki – Noncommercial 3.0 License.

Dalai lama calls him the Shantideva of our time. Published on: Comments: H.H the XIV Dalai lama was 21 years old when he first met Khunu lama briefly in 1956, on the 2500th anniversary of Buddha Jayanti in India. 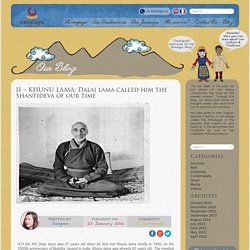 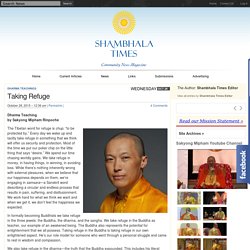 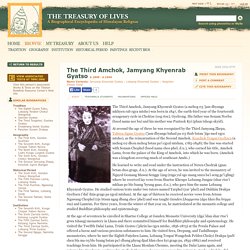 Compassion in Action: Kuten La on Dolgyal Shugden. Venerable Nechung Kuten, Thupten Ngodrup Medium of the State Oracle of Tibet (Excerpt from notes) There are seven billion people in the world and many other creatures. 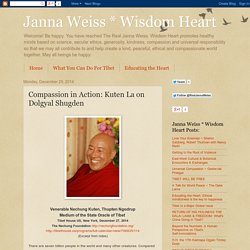 Compared with the other creatures, the human population is a minority. In Buddhist teaching, we make a great effort to appreciate the human birth and also the Ten Endowments and the Eight Conditions. So all sentient beings want happiness and don't want suffering. Lions and tigers have bigger bodies. The Central Philosophy of Tibet : Prof. Robert Thurman. Pearl of Wisdom Book II. Pearl of Wisdom Book I. Kalacharkra Mandala in 3D view. Khadro-la: Teaching at Tushita March 9th 2014 - opening prayers. The Central Philosophy of Tibet : Prof. Robert Thurman. Mindrolling Jetsün Khandro Rinpoche. His Holiness the Dalai Lama: 2008 Stages of the Path teachings on YouTube. His Holiness’s six day teaching on the Lam Rim at Lehigh University in 2008 was truly memorable in its depth and extent. 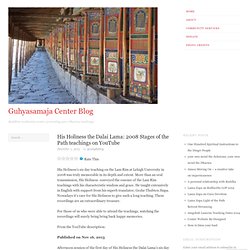 More than an oral transmission, His Holiness conveyed the essence of the Lam Rim teachings with his characteristic wisdom and grace. He taught extensively in English with support from his superb translator, Geshe Thubten Jinpa. Nowadays it’s rare for His Holiness to give such a long teaching. These recordings are an extraordinary treasure. HHDL NYC - English on Livestream. Teachings « Tushita Meditation Centre. Dharma Teaching with Q&A Serkong Tsenshab RinpocheJune 23, 2017. 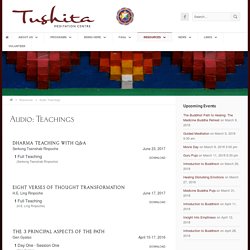