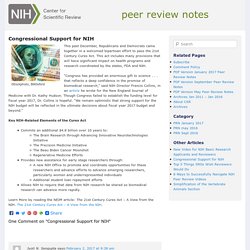 This act includes many provisions that will have significant impact on health programs and research coordinated by the states, FDA and NIH. “Congress has provided an enormous gift to science . . . that reflects a deep confidence in the promise of biomedical research,” said NIH Director Francis Collins, in an article he wrote for the New England Journal of Medicine with Dr. Kathy Hudson. Though Congress failed to establish the funding level for fiscal year 2017, Dr. Glial fibrillary acidic protein - ScienceDirect Topics. GFAP shows species-specific amino acid sequence heterogeneity, and its molecular weight ranges from 48kDa for mouse to 49kDa for human, 50kDa for bovine, and 51kDa for rat. 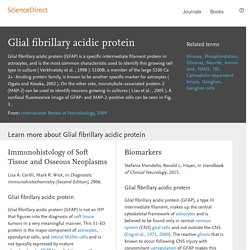 The relatively slow metabolic turnover rate for GFAP is consistent with a structural role for glial filaments in the cytoplasm. GFAP is composed of three distinct regions: an N-terminal HEAD region, a central ROD region, and a C-terminal TAIL region. Untitled Document. Sequence comparisons and intron-exon locations identify one of the known sponge collagens as homologous to the fibrillar collages in deuterostomes (collagen types I, II, III, V, and XI) with the Gly-Xaa-Yaa triplet repeats needed for helix formation. 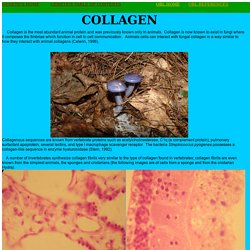 Since sponges can contain both fibrillar and non-fibrillar collagens, the amplification of this gene family had begun in the early animals (Exposito, 1990). Type IV collagen is known from sponges (Boute, 1997) and vertebrates and invertebrates use collagen IV in their basement membranes. Basement membranes exist in cnidarians and higher animals. (Garrone, R., from Muller, 1998.) Chemical & Engineering News. One June day in 1968 marine biologist Jack Rudloe went down to collect specimens from the docks at his local marina on the northern Florida coast of the Gulf of Mexico. 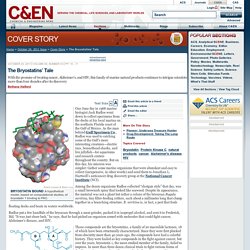 As the man behind Gulf Specimen Co., Rudloe was used to catching some of the Gulf’s more interesting creatures—electric rays, bonnethead sharks, and live jellyfish—for aquariums and research centers throughout the country. But on this day, his mission was simpler: Gather some marine organisms that were abundant and easy to collect (inexpensive, in other words) and send them to Jonathan L. Bryostatin. Bryostatins are a group of macrolide lactones first isolated in the 1960s by George Pettit from extracts of a species of bryozoan, Bugula neritina based on research from samples originally provided by Jack Rudloe to Jonathan L. 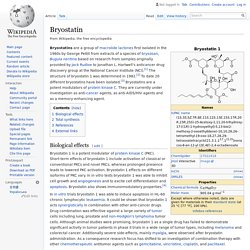 Hartwell’s anticancer drug discovery group at the National Cancer Institute (NCI).[1] The structure of bryostatin 1 was determined in 1982.[2] To date 20 different bryostatins have been isolated.[3] Bryostatins are a potent modulators of protein kinase C. They are currently under investigation as anti-cancer agents, as anti-AIDS/HIV agents and as a memory-enhancing agent. Biological effects[edit] Ascidian evo-devo. Here are three animals. 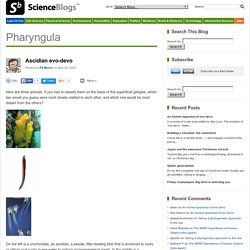 If you had to classify them on the basis of this superficial glimpse, which two would you guess were most closely related to each other, and which one would be most distant from the others? On the left is a urochordate, an ascidian, a sessile, filter-feeding blob that is anchored to rocks or pilings and sucks in sea water to extract microorganismal meals.

In the middle is a cephalochordate, Amphioxus, also a filter feeder, but capable of free swimming. Evolution and Development, 1st Edition. Key Features Reviews current research findings and thought on evolutionary developmental biology, providing researchers an overview and synthesis of the latest research findings and contemporary thought in the area. 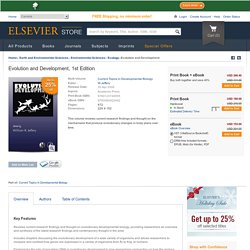 Untitled. Mangrove tunicate. Abundance: Distribution of E. turbinata can be patchy and abundance may vary with season. 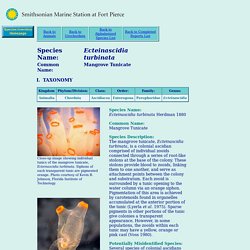 In the IRL, large clusters can carpet the undersides of floating docks, and the submerged lengths of red mangrove prop roots. In the Mediterranean, densities can reach 175 zooids per square meter (Carballo 2000). Reproduction: Adult E. turbinata are simultaneous hermaphrodites, but can reproduce sexually or asexually. Sexual reproduction occurs most frequently in the spring and summer when water temperatures are warm. The mangrove tunicate is ovoviviparous, and larvae are brooded in the peribranchial cavity for approximately 7 to 9 days after fertilization before being released into the water column (Carballo et al. 2000). Embryology: Ascidians produce tadpole larvae with a visible notochord. Martig_crozie. Species Description:M. crozierae is a large flatworm of the family Eurylephidae. 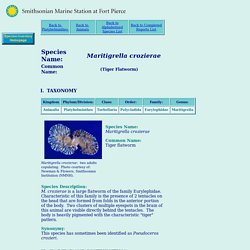 Characteristic of this family is the presence of 2 tentacles on the head that are formed from folds in the anterior portion of the body. Two clusters of multiple eyespots in the brain of this animal are visible directly behind the tentacles. The body is heavily pigmented with the characteristic "tiger" pattern. Synonymy: This species has sometimes been identified as Pseudoceros crozieri. II. Maritigrella crozierae. Description[edit] Maritigrella[3] crozierae is a large flatworm. 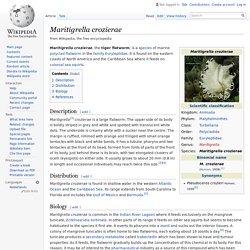 Ecteinascidia turbinata. Tiger Flatworm - Maritigrella crozieri by Jordan Arndt - Home. Periosteum. The periosteum is a membrane that covers the outer surface of all bones,[1] except at the joints of long bones. [nb 1] Endosteum lines the inner surface of all bones. Structure[edit] The periosteum consists of an inner osteogenic layer and an outer fibrous layer. Pituitary gland. In vertebrate anatomy, the pituitary gland, or hypophysis, is an endocrine gland about the size of a pea and weighing 0.5 grams (0.018 oz) in humans. Hypothalamus. Thyroid-stimulating hormone. Thyroid-stimulating hormone (also known as thyrotropin, thyrotropic hormone, TSH, or hTSH for human TSH) is a pituitary hormone that stimulates the thyroid gland to produce thyroxine (T4), and then triiodothyronine (T3) which stimulates the metabolism of almost every tissue in the body.[1] It is a glycoprotein hormone synthesized and secreted by thyrotrope cells in the anterior pituitary gland, which regulates the endocrine function of the thyroid.[2][3] Physiology[edit] Hormone levels[edit] TSH (with a half life of about an hour) stimulates the thyroid gland to secrete the hormone thyroxine (T4), which has only a slight effect on metabolism.