"Scheduling a 30-minute cardio workout at moderate intensity immediately before taking a written test or writing something that requires semantic memory might improve your performance."

More Proof That “Sound Mind, Sound Body” Is Timeless Wisdom. Marble statue of a youthful Hercules (A.D. 69-96) on display at The Met Fifth Avenue in Gallery 162. 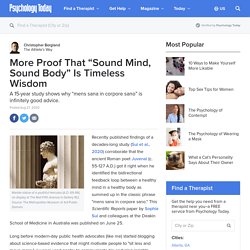 Source: The Metropolitan Museum of Art/Public Domain Recently published findings of a decades-long study (Sui et al., 2020) corroborate that the ancient Roman poet Juvenal (c. 55-127 A.D.) got it right when he identified the bidirectional feedback loop between a healthy mind in a healthy body as summed up in the classic phrase "mens sana in corpore sano. " This Scientific Reports paper by Sophia Sui and colleagues at the Deakin School of Medicine in Australia was published on June 25. article continues after advertisement Long before modern-day public health advocates (like me) started blogging about science-based evidence that might motivate people to "sit less and move more," Juvenal used poetry to communicate his enduring insights about the power of exercise to improve both mind and body.

Flash forward to the 21st century. "This is still an evolving picture. Can You Make Movement More Joyful? Are you struggling to keep up with the number of steps you need to get each day to stay healthy? 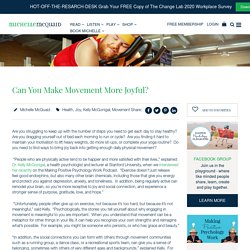 Are you dragging yourself out of bed each morning to run or cycle? Are you finding it hard to maintain your motivation to lift heavy weights, do more sit-ups, or complete your yoga routine? Do you need to find ways to bring joy back into getting enough daily physical movement? “People who are physically active tend to be happier and more satisfied with their lives,” explained Dr. Kelly McGonigal, a health psychologist and lecturer at Stanford University, when we interviewed her recently on the Making Positive Psychology Work Podcast. The Brain-Boosting Benefits of Exercise and Cerebral Blood Flow. Source: Viktoriya/Shutterstock Last week, researchers from the University of Calgary in Canada reported that older adults who started an aerobic exercise program and stuck with it for six months boosted cerebral blood flow (CBF) velocity, improved cerebrovascular regulation, and enhanced their cognition. 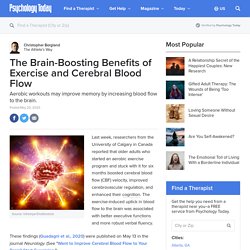 The exercise-induced uptick in blood flow to the brain was associated with better executive functions and more robust verbal fluency. More Evidence That Physical Activity Keeps Depression at Bay. Source: Song_about_summer/Shutterstock In my mind, aerobic exercise is an antidepressant. 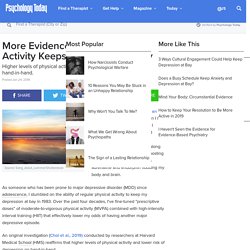 Every day, when I lace up my sneakers to go for a jog, I visualize a cascade of feel-good neurotransmitters (e.g., endocannabinoids, dopamine) along with a smorgasbord of mood-boosting endogenous hormones such as adrenaline and endorphin flooding my body and brain. As someone who has been prone to major depressive disorder (MDD) since adolescence, I stumbled on the ability of regular physical activity to keep my depression at bay in 1983. 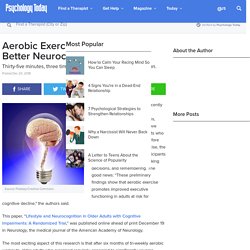 Before they began doing aerobic exercise, the previously sedentary study participants had difficulty concentrating, making decisions, and remembering. The good news: “These preliminary findings show that aerobic exercise promotes improved executive functioning in adults at risk for cognitive decline," the authors said. article continues after advertisement This paper, “Lifestyle and Neurocognition in Older Adults with Cognitive Impairments: A Randomized Trial,” was published online ahead of print December 19 in Neurology, the medical journal of the American Academy of Neurology. 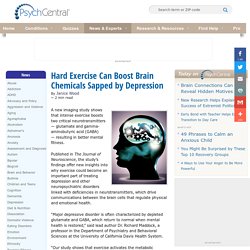 Published in The Journal of Neuroscience, the study’s findings offer new insights into why exercise could become an important part of treating depression and other neuropsychiatric disorders linked with deficiencies in neurotransmitters, which drive communications between the brain cells that regulate physical and emotional health. “Major depressive disorder is often characterized by depleted glutamate and GABA, which return to normal when mental health is restored,” said lead author Dr. Richard Maddock, a professor in the Department of Psychiatry and Behavioral Sciences at the University of California Davis Health System. “Our study shows that exercise activates the metabolic pathway that replenishes these neurotransmitters.” To understand how exercise affects the brain, the team studied 38 healthy volunteers. When These Muscles Are Fitter Your Brain Is Also Fitter. The brains and bodies of identical twins were compared over ten years. 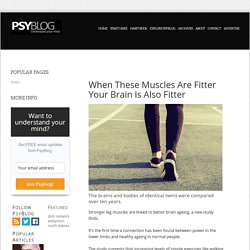 Stronger leg muscles are linked to better brain ageing, a new study finds. It’s the first time a connection has been found between power in the lower limbs and healthy ageing in normal people. The study suggests that increasing levels of simple exercises like walking or even standing for longer may lead to healthy cognitive ageing.

The study followed 324 identical female twins over a ten-year period. Fitness and lifestyle habits were measured by researchers. They also gave the twins tests of memory, learning and thinking at the start and end of the study. Genetic factors were controlled for because identical twins have identical genes. Leg power was the best predictor of healthy cognitive ageing out of all the factors the researchers measured. In general, the twin which had the strongest leg power at the start of the study maintained stronger mental abilities ten years later. Dr Claire Steves, who led the research said:

Want to Keep Your Brain Youthful? You Should Be Dancing. Irisin. Good Health. Sport & Health.