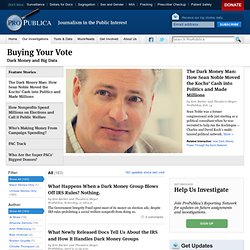 Nothing. by Kim Barker and Theodoric Meyer ProPublica, Yesterday, 11:08 a.m. The Government Integrity Fund spent most of its money on election ads, despite IRS rules prohibiting a social welfare nonprofit from doing so. What Newly Released Docs Tell Us About the IRS and How It Handles Dark Money Groups by Kim Barker and Theodoric Meyer ProPublica, April 9, 11:52 p.m. Here are five takeaways ProPublica found from the documents released Wednesday by a House committee.

The Dark Money Man: How Sean Noble Moved the Kochs’ Cash into Politics and Made Millions. Noble handed out almost $137 million in 2012 alone -- all of it so-called dark money from unnamed donors -- from his perch atop the Center to Protect Patient Rights, a group run out of an Arizona post office box. 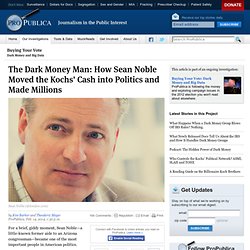 Much of it was channeled to obvious destinations: Groups supporting Republican presidential candidate Mitt Romney, for example. But with Noble as ringmaster, Koch money also poured into efforts that didn’t surface until long after Election Day: To a political committee backing Wisconsin Gov. Scott Walker against a recall attempt; to a group blaming President Obama for high gas prices; even to a legal challenge to Arizona’s redistricting plan. How Dark Money Flows Through the Koch Network. A Reading Guide on the Billionaire Koch Brothers. Top 13 Questions From Our Q&A on Dark Money in the 2012 Campaign. Dark Money and the 2012 Election: We Need Your Help! Join ProPublica’s campaign to shine a light on the hidden aspects of campaign finance by chronicling ad spending in Las Vegas, one of the nation’s most heavily blanketed cities. 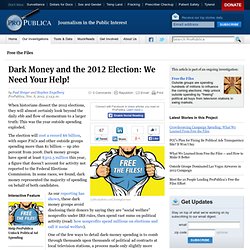 When historians dissect the 2012 elections, they will almost certainly look beyond the daily ebb and flow of momentum to a larger truth: This was the year outside spending exploded. The election will cost a record $6 billion [1], with super PACs and other outside groups spending more than $1 billion — up 260 percent from 2008. Dark money groups have spent at least $302.5 million [2] this year, a figure that doesn’t account for activity not reported to the Federal Elections Commission. Gross Political Product: Outside campaign spending tops 2010 total. In a campaign that's supposed to be about an ailing economy, there's just one financial indicator that remains consistently robust: Call it the Gross Political Product. 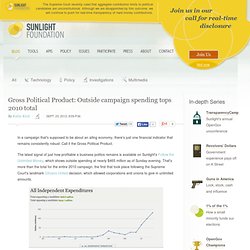 The latest signal of just how profitable a business politics remains is available on Sunlight's Follow the Unlimited Money, which shows outside spending at nearly $465 million as of Sunday evening. That's more than the total for the entire 2010 campaign, the first that took place following the Supreme Court's landmark Citizens United decision, which allowed corporations and unions to give in unlimited amounts. This cycle's outside spending mostly comes in the form of "independent expenditures" supporting or opposing political candidates by unions, corporations, trade associations, non-profit groups and super PACs. Wonkblog: Poli-Sci Perspective. How the Maker of TurboTax Fought Free, Simple Tax Filing. Intuit, producer of the top-selling tax software TurboTax, has opposed letting the government do your taxes for free – even though it could save time and headaches for millions of filers. 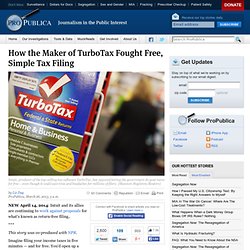 (Shannon Stapleton/Reuters) This story was co-produced with NPR [2]. Imagine filing your income taxes in five minutes — and for free. The Champions - Series - The New York Times - Corporate Tax Holiday in Debt Ceiling Deal: Where's the Uproar? Evil Corporate Tax Holiday Gains Bipartisan Support. Conference on the Constitutional Convention : Harvard Law School, September 24-25, 2011. How to Act with Consequence. Lawrence Lessig and Mark McKinnon: How to sober up Washington. The following op-ed, co-written by HLS Professor Lawrence Lessig and Daily Beast contributor Mark McKinnon, appeared in the Apr. 6 edition of the online publication. by Mark McKinnon and Lawrence Lessig Washington is hopelessly addicted to money and thus to the status quo; drunk with power and incapable of getting sober and fixing itself. 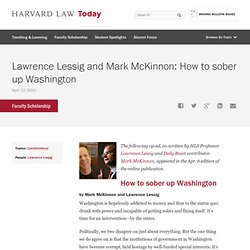 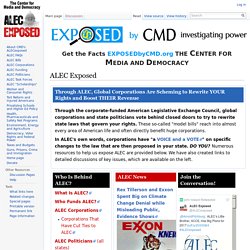 Gains were made even in the face of industry deception and big dollar ad campaigns. In a victory for climate activists and solar energy, Floridians voted down Amendment 1, a constitutional amendment which would have made it hard for people with solar panels to sell energy back to the grid. Mapping the Koch connections in Wisconsin. Traffic on a Muckety map published in August, examining the Koch brothers’ extensive involvement in libertarian politics, has spiked this week because of the demonstrations in Wisconsin. 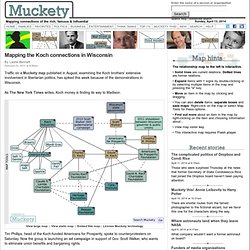 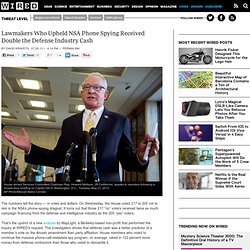