Mortality in Iraq Associated with the 2003–2011 War and Occupation: Findings from a National Cluster Sample Survey by the University Collaborative Iraq Mortality Study. Abstract Background Previous estimates of mortality in Iraq attributable to the 2003 invasion have been heterogeneous and controversial, and none were produced after 2006. 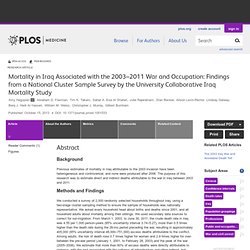 The purpose of this research was to estimate direct and indirect deaths attributable to the war in Iraq between 2003 and 2011. Methods and Findings We conducted a survey of 2,000 randomly selected households throughout Iraq, using a two-stage cluster sampling method to ensure the sample of households was nationally representative. Conclusions Beyond expected rates, most mortality increases in Iraq can be attributed to direct violence, but about a third are attributable to indirect causes (such as from failures of health, sanitation, transportation, communication, and other systems). Please see later in the article for the Editors' Summary Editors' Summary War is a major public health problem. Iraq. The project, Iraq on the Regional and International Stage: National Interests and Foreign Policy Determinants and Dynamics, researched the varied foreign policy interests, influences, and actors inside Iraq. 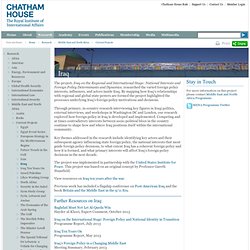 By mapping how Iraq's relationships with regional and global state powers are formed the project highlighted the processes underlying Iraq's foreign policy motivations and decisions. Through primary, in-country research interviewing key figures in Iraqi politics, external interviews, and workshops in Washington DC and London, our research explored how foreign policy in Iraq is developed and implemented. Competing and at times contradictory interests between socio-political blocs in the country continue to shape how and where Iraq positions itself within the international community. The project was implemented in partnership with the United States Institute for Peace. Occasional Papers » Institute for Iraqi Studies. The Institute’s first occasional paper–The Hawza under Siege: A Study in Ba’th Party Archive–by ‘Abbas Kadhim has just been published. 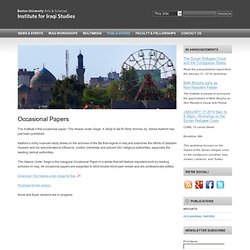 Kadhim’s richly nuanced study draws on the archives of the Ba’thist regime in Iraq and examines the efforts of Saddam Hussein and his subordinates to influence, control, intimidate and subvert Shi’i religious authorities, especially the leading clerical authorities. The Hawza Under Siege is the inaugural Occasional Paper in a series that will feature important work by leading scholars on Iraq. All occasional papers are subjected to strict double-blind peer review and are professionally edited. Download The Hawza under Siege for free. Purchase Kindle version. Iraq. US "war on terror" - Iraq. Maliki's Iraq: Rape, executions and torture - Human Rights. Baghdad - Heba al-Shamary (name changed for security reasons) was released last week from an Iraqi prison where she spent the last four years. 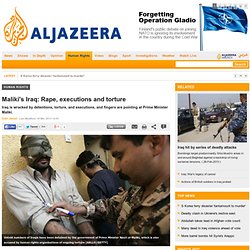 "I was tortured and raped repeatedly by the Iraqi security forces," she told Al Jazeera. "I want to tell the world what I and other Iraqi women in prison have had to go through these last years. It has been a hell. " Heba was charged with terrorism, a fate faced by many Iraqis who are detained by security forces. "I now want to explain to people what is occurring in the prisons that [Prime Minister Nouri al-] Maliki and his gangs are running," Heba added.

Heba's story, horrific as it is, unfortunately is but one example of what a recent report from Amnesty International refers to as "a grim cycle of human rights abuses" in Iraq today. One Iraqi woman, speaking on condition of anonymity, said her nephew was first detained when he was just 18. Maliki's most solemn hour. US invasion leaves lasting Iraq scars. Iraq more dangerous than a year ago, U.S. review finds. The findings contrast with public statements by U.S. diplomatic and military officials in Iraq and come as Washington awaits a final decision by Iraqi leaders on whether they want U.S. troops to stay in the country beyond the expiration of a three-year security agreement in December. 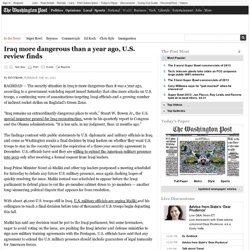 U.S. officials have said they are willing to extend the American military presence into 2012 only after receiving a formal request from Iraqi leaders. Iraqi Prime Minister Nouri al-Maliki and other top leaders postponed a meeting scheduled for Saturday to debate any future U.S. military presence, once again dashing hopes of quickly resolving the issue. Maliki instead was scheduled to appear before the Iraqi parliament to defend plans to cut the 46-member cabinet down to 30 members — another long-simmering political dispute that appears far from resolution. Bowen’s report noted that 14 U.S. troops were killed by hostile fire in Iraq in June, the bloodiest month since April 2009. Maj. Iraqi torture victim's tale reveals nation's darker side. Ali was always the least troublesome Methboub son, a dutiful member of the Iraqi family whose saga the Monitor has chronicled since 2002. 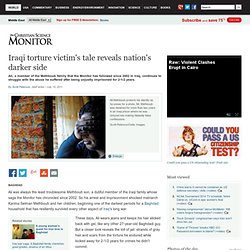 So his arrest and imprisonment shocked matriarch Karima Selman Methboub and her children, beginning one of the darkest periods for a Baghdad household that has resiliently survived every other aspect of Iraq's long war. Skip to next paragraph Subscribe Today to the Monitor Click Here for your FREE 30 DAYS ofThe Christian Science MonitorWeekly Digital Edition These days, Ali wears jeans and keeps his hair slicked back with gel, like any other 27-year-old Baghdadi guy. The internal scars are harder to detect. From that July afternoon in 2008 when Ali was picked up at a neighborhood coffee shop by a joint US-Iraqi patrol, the Methboub family was dragged into a world of torture and intimidation, forced confession and legal ambiguity, of bribes demanded and paid that has destroyed the lives of thousands of Iraqis.

That is exactly what happened. Violent Deaths of Iraqi Civilians, 2003–2008: Analysis by Perpetrator, Weapon, Time, and Location.