A New Biography Traces the Pathology of Allen Dulles and His Appalling Cabal. Timeline: The Tortured History of the Senate’s Torture Report. 12 Things to Keep in Mind When You Read the Torture Report. "Kill the Messenger" Resurrects Gary Webb, Journalist Maligned for Exposing CIA Ties to Crack Trade. The Dark Allience - Gary Webb / SJMN Series. Rep. 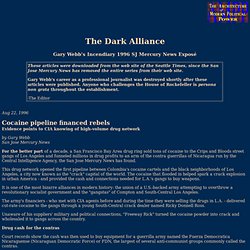 Maxine Waters, D-Calif., the chief congressional champion of a thorough investigation into the newspaper's findings, insisted yesterday that the Mercury News, while acknowledging problems with its series, has not retreated from findings that some drug money went to the contras. The CIA's Secret Journal Articles Are Gossipy, Snarky, and No Longer Classified. The CIA has declassified a trove of articles from its in-house journal, Studies in Intelligence. 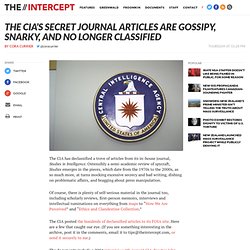 Ostensibly a semi-academic review of spycraft, Studies emerges in the pieces, which date from the 1970s to the 2000s, as so much more, at turns mocking excessive secrecy and bad writing, dishing on problematic affairs, and bragging about press manipulation. Of course, there is plenty of self-serious material in the journal too, including scholarly reviews, first-person memoirs, interviews and intellectual ruminations on everything from maps to “How We Are Perceived” and “Ethics and Clandestine Collection.” The CIA posted the hundreds of declassified articles to its FOIA site. Here are a few that caught our eye. 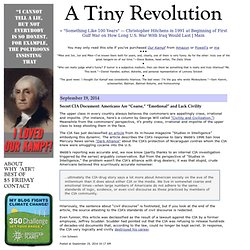 (For instance, here’s a column by George Will called ”Civility and Civilization.”) CIA employee’s quest to release information ‘destroyed my entire career’ His CIA career included assignments in Africa, Afghanistan and Iraq, but the most perilous posting for Jeffrey Scudder turned out to be a two-year stint in a sleepy office that looks after the agency’s historical files. 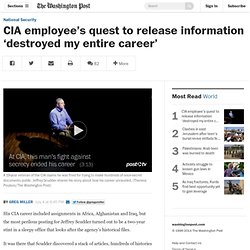 It was there that Scudder discovered a stack of articles, hundreds of histories of long-dormant conflicts and operations that he concluded were still being stored in secret years after they should have been shared with the public. To get them released, Scudder submitted a request under the Freedom of Information Act — a step that any citizen can take, but one that is highly unusual for a CIA employee. Four years later, the CIA has released some of those articles and withheld others. It also has forced Scudder out. His request set in motion a harrowing sequence. The CIA's Mop-Up Man: L.A. Times Reporter Cleared Stories With Agency Before Publication. A prominent national security reporter for the Los Angeles Times routinely submitted drafts and detailed summaries of his stories to CIA press handlers prior to publication, according to documents obtained by The Intercept. 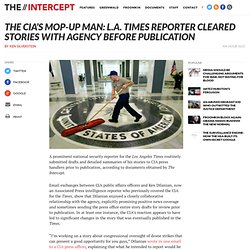 Email exchanges between CIA public affairs officers and Ken Dilanian, now an Associated Press intelligence reporter who previously covered the CIA for the Times, show that Dilanian enjoyed a closely collaborative relationship with the agency, explicitly promising positive news coverage and sometimes sending the press office entire story drafts for review prior to publication. In at least one instance, the CIA’s reaction appears to have led to significant changes in the story that was eventually published in the Times.

Dilanian’s emails were included in hundreds of pages of documents that the CIA turned over in response to two FOIA requests seeking records on the agency’s interactions with reporters. That claim was subsequently debunked. “Hooray!” 'Comprehensive' CIA Torture Report Won't Name Well-Known Architects of Torture Program. CIA Intervention in Ukraine Has Been Taking Place for Decades. Glory to Ukraine! 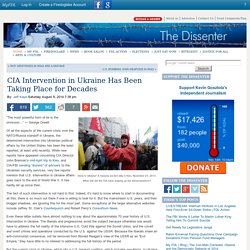 A massive pro-EU rally in Kiev, November 24, 2013. What role did the CIA have amping up the demonstrations? “The most powerful form of lie is the omission…” — George Orwell Of all the aspects of the current crisis over the NATO/Russia standoff in Ukraine, the determined intervention into Ukrainian political affairs by the United States has been the least reported, at least until recently. While new reports have appeared concerning CIA Director John Brennan’s mid-April trip to Kiev, and CIA/FBI sending “dozens” of advisers to the Ukrainian security services, very few reports mention that U.S. intervention in Ukraine affairs goes back to the end of World War II.

The fact of such intervention is not hard to find. Even these latter outlets have almost nothing to say about the approximately 70 year history of U.S. intervention in Ukraine. US sent Latin youth undercover in anti-Cuba ploy. WASHINGTON (AP) — Fernando Murillo was typical of the young Latin Americans deployed to Cuba by a U.S. agency to work undercover. 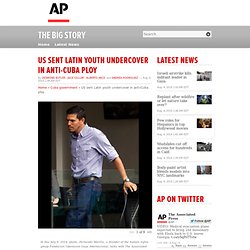 He had little training in the dangers of clandestine operations — or how to evade one of the world's most sophisticated counter-intelligence services. Their assignment was to recruit young Cubans to anti-government activism, which they did under the guise of civic programs, including an HIV prevention workshop. Murillo was instructed to check in every 48 hours and was provided with a set of security codes. The CIA's Dirty Playbook Is About to Be Opened. A long-awaited Senate report won’t use the word ‘torture’ to describe the CIA’s interrogations. 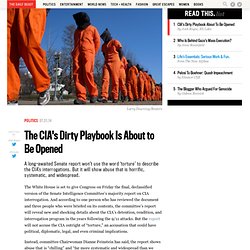 But it will show abuse that is horrific, systematic, and widespread. Obama officials, Senate intelligence panel spar over deletions from torture report. WASHINGTON — The Obama administration and the Senate Intelligence Committee are sparring over the administration’s deletions of fake names from the public version of a long-awaited report on the CIA’s use of harsh interrogation methods on suspected terrorists, McClatchy has learned. 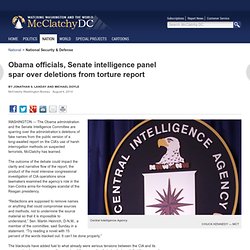 The outcome of the debate could impact the clarity and narrative flow of the report, the product of the most intensive congressional investigation of CIA operations since lawmakers examined the agency’s role in the Iran-Contra arms-for-hostages scandal of the Reagan presidency. “Redactions are supposed to remove names or anything that could compromise sources and methods, not to undermine the source material so that it is impossible to understand,” Sen. Martin Heinrich, D-N.M., a member of the committee, said Sunday in a statement. “Try reading a novel with 15 percent of the words blacked out. It can’t be done properly.” But Tom Mentzer, a spokesman for the committee’s chairwoman, Sen.

The CIA is getting away with keeping every important secret about torture. At this point, is there anything the Central Intelligence Agency thinks it can’t get away with? 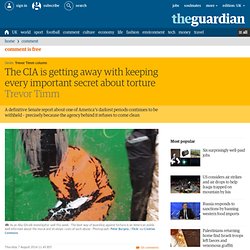 Brennan acknowledged that an internal investigation had found agency security personnel transgressed a firewall set up on a CIA network, called RDINet, which allowed Senate committee investigators to review agency documents for their landmark inquiry into CIA torture. Top senator rejects CIA torture report redactions ahead of public release. Luis Posada Carriles Acquitted in Texas. For justice to be served, Attorney José Pertierra says that Posada Carriles ought to be extradited. Editor’s Note: This piece appeared first in La Jornada, the national Mexican daily. It was translated by Machetera/Tlaxcala. Luis Posada Carriles, a former CIA employee, veteran of the failed invasion of Cuba, support operative for the Nicaraguan Contras and the accused mastermind behind the worst terrorist attacks in Latin America and the Caribbean, was acquitted last Friday in a federal court in El Paso, Texas—but only on charges related with lying to immigration authorities, and not for his long history of violence, for which justice authorities in Venezuela and other countries are still seeking his extradition.

CIA torture architect breaks silence to defend 'enhanced interrogation' James Mitchell: 'I'm just a guy who got asked to do something for his country' Dr James Elmer Mitchell has been called a war criminal and a torturer. American missing in Iran since 2007 was working for the CIA. In March 2007, retired FBI agent Robert Levinson flew to Kish Island, an Iranian resort awash with tourists, smugglers and organized crime figures.

Days later, after an arranged meeting with an admitted killer, he checked out of his hotel, slipped into a taxi and vanished. For years, the US has publicly described him as a private citizen who traveled to the tiny Persian Gulf island on private business. But that was just a cover story. The CIA File on Luis Posada Carilles. The Gay Terrorist. It’s been more than eight years since 9/11, but the fallout continues to reverberate throughout today’s New York. C.I.A. Delivers Cash to Afghan Leader’s Office. German Prosecutor Would Have Filed Indictments for CIA Rendition Had US Provided Information. The German newspaper Spiegel has an interview with a German prosecutor, who ultimately decided not to file indictments in the case of Egyptian Muslim cleric Abu Omar. Omar was kidnapped in a CIA operation in Italy and rendered to Germany and then Egypt, where he was tortured.

Last week, according to Reuters, a Milan appeals court in Italy sentenced the country’s foreign military intelligence chief, Niccolo Pollari, to 10 years in jail for his role. Pollari’s former deputy, Marco Mancini, was sentenced to 9 years. The Petraeus Legacy: A Paramilitary CIA? Within some military and intelligence circles, it was the CIA director's relationship with JSOC—not Paula Broadwell—that raised concerns. Civilian analysts gained Petraeus’s ear while he was commander in Afghanistan. Zero dollars. Insiders voice doubts about CIA’s 9/11 story. A growing number of former government insiders — all responsible officials who served in a number of federal posts — are now on record as doubting ex-CIA director George Tenet’s account of events leading up to the Sept. 11, 2001, attacks on the United States.

NYPD CIA Anti-Terror Operations Conducted In Secret For Years. NEW YORK (Associated Press)-- Since the Sept. 11 terrorist attacks, the New York Police Department has become one of the nation's most aggressive domestic intelligence agencies, targeting ethnic communities in ways that would run afoul of civil liberties rules if practiced by the federal government, an Associated Press investigation has found. Feinstein: Senate Panel's Probe of CIA Torture Program Concludes It Was "Far More Widespread and Systematic Than We Thought" Bush Social Security Plan Proves Tough Sell among Working Poor By Jonathan Weisman The Washington Post Monday 18 April 2005 Investment choice has limited appeal, studies find. Brenda Ellis's day begins at 6:30 a.m., when she rousts her 11-year-old son, Imani, from bed, hustles him into the kitchen for breakfast and to the school bus by 7. Manhattan Judge Spares the CIA - Law Blog. [interactive] CIA black sites.