Operation Pegusus. Iran-Contra & Contra Drug Smuggling. Ron Paul Had Accurate Conspiracy Theory: CIA Was Tied To Drug Traffickers. WASHINGTON -- According to a former aide, Republican presidential candidate Ron Paul has long been drawn toward conspiracy theories. Eric Dondero, who served Paul off and on from 1987 to 2003, wrote recently that the Texas Republican suspected that George W. Bush may have had advance knowledge of the 9/11 attacks and that Franklin Roosevelt knew in advance about Pearl Harbor. Paul's writings and speeches spotlight a host of other plots, including the "war on Christmas.

" But just because not all of Paul's theories are backed by good evidence doesn't mean none of them are. In 1988, while running for president on the Libertarian Party ticket, he highlighted yet another conspiracy theory, and this one doesn't collapse under investigation: The CIA, Paul told a gathering of the National Organization for the Reform of Marijuana Laws, was involved in trafficking drugs as part of the Iran-Contra debacle. All of these and other U.S. "My first thought was, 'Holy shit! ' Special Reports - Cocaine, Conspiracy Theories And The Cia In Central America. CIA-Contra-Crack Cocaine Controversy. E. 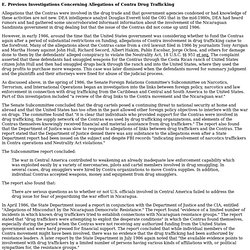 CIA-Contra Cocaine Scandal: The Tragic Saga of Gary Webb. Starring Jeremy Renner as the late Gary Webb, the movie of Webb’s investigation of the CIA’s Contra-cocaine scandal – and of Webb’s destruction by mainstream news outlets – is set to begin filming this summer. 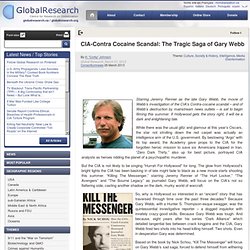 If Hollywood gets the story right, it will be a dark and enlightening tale. While there was the usual glitz and glamour at this year’s Oscars, the star not strolling down the red carpet was actually an intelligence arm of the U.S. government. By bestowing “Argo” with its top award, the Academy gave props to the CIA for the forgotten heroic mission to save six Americans trapped in Iran. “Zero Dark Thirty,” also up for best picture, portrayed CIA analysts as heroes ridding the planet of a psychopathic murderer. But the CIA is not likely to be singing “Hurrah For Hollywood” for long. So, why is Hollywood so interested in an “ancient” story that has traversed through time over the past three decades? Soon, the firestorm erupted. "I've got George Bush by the balls!" 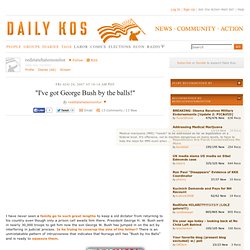 W. Bush that he had evidence which would alter the outcome of the election. Then a short while later a video of a huge rally was frequently shown on TV with Noriega waving a machete and shouting "I've got George Bush by the balls! " General Noriega's threats towards Bush worked because the CIA quickly halted their efforts to destabilize his regime. Vice President Bush had a 14 point lead over Dukakis yet he was worried enough about Noriega to ask President Reagan to have the CIA back off on it's plan of weakening the Panamanian leader but this was only temporary because 13 months later Bush invaded Panama just to get one man. DEA Agent with Bush President George H. Perhaps the most hated man in US history ! DEA Agent Rene De La Cova who arrested Noriega was busted himself 5 years later Noriega & De La Cova I Volunteer to Kidnap Oliver North. 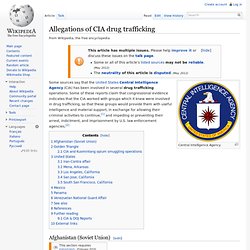 Some of these reports claim that congressional evidence indicates that the CIA worked with groups which it knew were involved in drug trafficking, so that these groups would provide them with useful intelligence and material support, in exchange for allowing their criminal activities to continue,[1] and impeding or preventing their arrest, indictment, and imprisonment by U.S. law enforcement agencies.[2] Afghanistan (Soviet Union)[edit]

CIA and Contras cocaine trafficking in the US. Central Intelligence Agency The involvement of the United States Central Intelligence Agency (CIA) in cocaine trafficking in Central America during the Reagan Administration as part of the Contra war in Nicaragua has been the subject of several official and journalistic investigations since the mid-1980s. 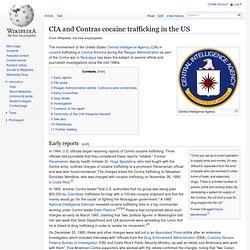 Early reports[edit] "Once you set up a covert operation to supply arms and money, it's very difficult to separate it from the kind of people who are involved in other forms of trade, and especially drugs. There is a limited number of planes, pilots and landing strips. Oliver North. Early life[edit] North was born in San Antonio, Texas, the son of Ann Theresa (née Clancy) and Oliver Clay North, a US Army major.[3][4] He grew up in Philmont, New York, and graduated from Ockawamick High School in 1961. 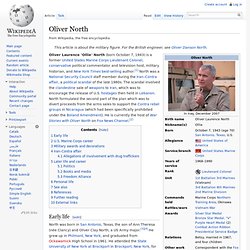