When U.S. drones kill civilians, Yemen’s government tries to conceal it. Within seconds, 11 of the passengers were dead, including a woman and her 7-year-old daughter. 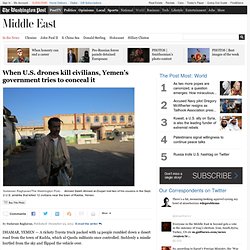 A 12-year-old boy also perished that day, and another man later died from his wounds. The Yemeni government initially said that those killed were al-Qaeda militants and that its Soviet-era jets had carried out the Sept. 2 attack. But tribal leaders and Yemeni officials would later say that it was an American assault and that all the victims were civilians who lived in a village near Radda, in central Yemen. US drone strikes kill Jordanian, Yemeni AQAP operatives. The US targeted al Qaeda in the Arabian Peninsula fighters in the first reported drone strikes in Yemen in seven weeks. 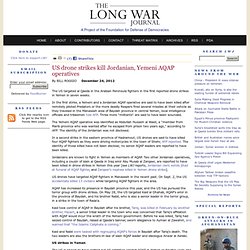 In the first stirke, a Yemeni and a Jordanian AQAP operative are said to have been killed after remotely piloted Predators or the more deadly Reapers fired several missiles at their vehicle as they traveled in the Manaseeh area of Baydah province in central Yemen, local intelligence officials and tribesmen told AFP. Three more "militants" are said to have been wounded. The Yemeni AQAP operative was identified as Abdullah Hussein al Waeli, a "member from Marib province who was wanted after he escaped from prison two years ago," according to AFP. In the US, mass child killings are tragedies. In Pakistan, mere bug splats. "Mere words cannot match the depths of your sorrow, nor can they heal your wounded hearts … These tragedies must end. 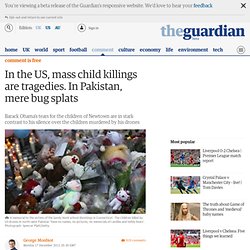 And to end them, we must change. " Every parent can connect with what President Barack Obama said about the murder of 20 children in Newtown, Connecticut. The Guilty Conscience of a Drone Pilot Who Killed a Child - Conor Friedersdorf. May his story remind us that U.S. strikes have reportedly killed many times more kids than died in Newtown -- and that we can do better. 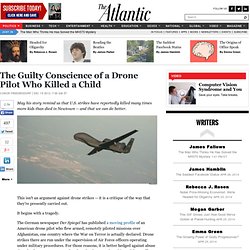 Reuters. The day 69 children died. The attack was on a religi­ous semina­ry in Cheneg­ai, in Bajaur Agency. 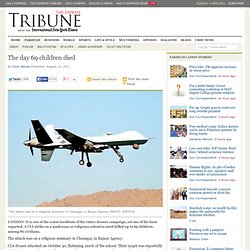 The attack was on a religious seminary in Chenegai, in Bajaur Agency. PHOTO: AFP/FILE LONDON: It is one of the worst incidents of the entire drones campaign, yet one of the least reported. U.S. airstrike that killed American teen in Yemen raises legal, ethical questions. Unlike the secretive U.S. airstrikes that have killed hundreds of foreigners in Pakistan, Somalia and Yemen, this case involved an American teenager. 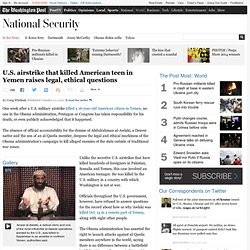 He was killed by the U.S. military in a country with which Washington is not at war. Officials throughout the U.S. government, however, have refused to answer questions for the record about how or why Awlaki was killed Oct. 14 in a remote part of Yemen, along with eight other people. The Obama administration has asserted the right to launch attacks against al-Qaeda members anywhere in the world, saying there is no difference between a battlefield in Afghanistan and a suspected terrorist hideout in Yemen or Somalia.

But when U.S. forces kill civilians or operations go awry in traditional war zones such as Afghanistan or Iraq, the military routinely conducts official investigations. The results are often declassified and released as public records. “This country is much safer as a result of the loss of Awlaki,” said Defense Secretary Leon E. In Pakistan, Drones Kill Our Innocent Allies. Counting Civilian Casualties in CIA’s Drone War - by Meg Braun. A report released in September by human rights researchers at Stanford Law School and New York University Law School sets out to demonstrate that U.S. drone policies are "damaging and counterproductive. 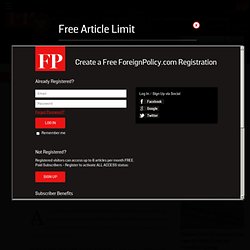 " Media outlets from CNN to BBC hailed the report as new evidence of the U.S. government's false narrative on drones and the New York Times' Scott Shane described the study as "among the most thorough on the subject to date. " While the Stanford-NYU report certainly presents a comprehensive review of existing drone research, its new contributions to the evidentiary record are far more modest than its sweeping conclusions would suggest. Number Crunching. Grandfather grieves teenage grandson killed by U.S. drone. U.S. drone strikes killing Americans Debate over U.S. drone strikes By Mick Krever, CNN Two years ago, Nasser al-Awlaki wrote a letter to President Obama. 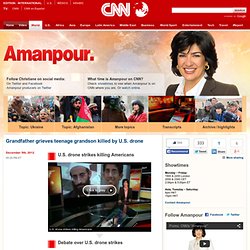 His request was simple: Please do not kill my son. U.S. Drone Strike Said to Kill 60 in Pakistan. Obama terror drones: CIA tactics in Pakistan include targeting rescuers and funerals: The Bureau of Investigative Journalism. Missiles being loaded onto a military Reaper drone in Afghanistan. 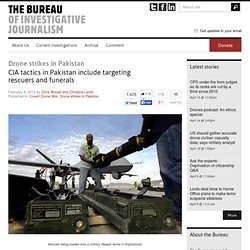 The CIA’s drone campaign in Pakistan has killed dozens of civilians who had gone to help rescue victims or were attending funerals, an investigation by the Bureau for the Sunday Times has revealed. The findings are published just days after President Obama claimed that the drone campaign in Pakistan was a ‘targeted, focused effort’ that ‘has not caused a huge number of civilian casualties.’

Speaking publicly for the first time on the controversial CIA drone strikes, Obama claimed last week they are used strictly to target terrorists, rejecting what he called ‘this perception we’re just sending in a whole bunch of strikes willy-nilly’. ‘Drones have not caused a huge number of civilian casualties’, he told a questioner at an on-line forum. ‘This is a targeted, focused effort at people who are on a list of active terrorists trying to go in and harm Americans’.

Related article: A question of legality A case of retaliation? U.S. Drone Strikes Are Said to Target Rescuers. US drone strikes target rescuers in Pakistan – and the west stays silent. The US government has long maintained, reasonably enough, that a defining tactic of terrorism is to launch a follow-up attack aimed at those who go to the scene of the original attack to rescue the wounded and remove the dead. 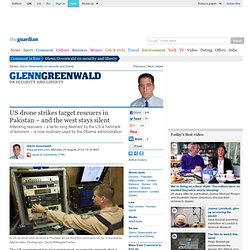 Morally, such methods have also been widely condemned by the west as a hallmark of savagery. Yet, as was demonstrated yet again this weekend in Pakistan, this has become one of the favorite tactics of the very same US government. A 2004 official alert from the FBI warned that "terrorists may use secondary explosive devices to kill and injure emergency personnel responding to an initial attack"; the bulletin advised that such terror devices "are generally detonated less than one hour after initial attack, targeting first responders as well as the general population". "A van draws up next to the wounded man and Iraqis climb out. They are unarmed and start to carry the victim to the vehicle in what would appear to be an attempt to get him to hospital. The US has killed more than 168 children in Pakistan - Another World Is Possible.

Chris Woods Drone War Exposed – the complete picture of CIA strikes in Pakistan. The Obama administration has come to rely heavily on CIA drone strikes to attack alleged militants in the country’s western tribal areas. To date, at least 236 drone attacks have been ordered in Obama’s name. CIA drone strikes have led to far more deaths in Pakistan than previously understood, according to extensive new research published by the Bureau. More than 160 children are among at least 2,292 people reported killed in US attacks since 2004. Drone strikes kill, maim and traumatize too many civilians, U.S. study says. A Pakistani man burns an American flag during a protest against U.S. drone attacks in Multan on February 9, 2012.

A study by Stanford and NYU claims only about 2% of killed targets are "high-level"Innocent civilians are killed, maimed and traumatized by drone strikes, the report saysDrones in Pakistan killed 176 children from 2004 to 2012, an independent group saysObama has said a target must meet "very tight and very strict standards" (CNN) -- U.S. drone strikes in Pakistan have killed far more people than the United States has acknowledged, have traumatized innocent residents and largely been ineffective, according to a new study released Tuesday. The study by Stanford Law School and New York University's School of Law calls for a re-evaluation of the practice, saying the number of "high-level" targets killed as a percentage of total casualties is extremely low -- about 2%. Obama reflects on drone warfare use. The Malalas You Don't See. Malians listen for the sound of drones.

A recent article in the Wall Street Journal argues that the fact Islamist extremists in northern Mali do not enjoy the support of the local population, combined with the area's flat desert landscape, "suggest that an aggressive Pakistan-style drone campaign can have results". With the French reported to be moving surveillance drones into the region, an intensive drone campaign supporting a relatively small number of ground troops may seem an attractive option for the intervention forces.

60 drone hits kill 14 al-Qaeda men, 687 civilians. Friday, April 10, 2009 By Amir Mir LAHORE: Of the 60 cross-border predator strikes carried out by the Afghanistan-based American drones in Pakistan between January 14, 2006 and April 8, 2009, only 10 were able to hit their actual targets, killing 14 wanted al-Qaeda leaders, besides perishing 687 innocent Pakistani civilians. The success percentage of the US predator strikes thus comes to not more than six per cent. Figures compiled by the Pakistani authorities show that a total of 701 people, including 14 al-Qaeda leaders, have been killed since January 2006 in 60 American predator attacks targeting the tribal areas of Pakistan.

Two strikes carried out in 2006 had killed 98 civilians while three attacks conducted in 2007 had slain 66 Pakistanis, yet none of the wanted al-Qaeda or Taliban leaders could be hit by the Americans right on target. The seventh such attack conducted in North Waziristan on October 31, 2008 had killed Abu Jihad al Masri, a top leader of the Egyptian Islamic group. The Drones Are Coming: New War on Civilians… « NWO Observer. By Ramzy Baroud Source: ramzybaroud.net US President Barack Obama took the podium in a White House press conference and stood with an all-embellished confidence that often accompanies new presidents.