Who is more powerful – states or corporations? Who holds the power in international politics? 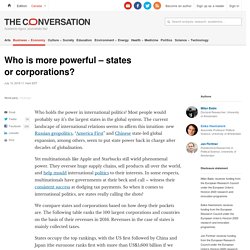 Most people would probably say it’s the largest states in the global system. The current landscape of international relations seems to affirm this intuition: new Russian geopolitics, “America First” and Chinese state-led global expansion, among others, seem to put state power back in charge after decades of globalisation. Yet multinationals like Apple and Starbucks still wield phenomenal power. They oversee huge supply chains, sell products all over the world, and help mould international politics to their interests. In some respects, multinationals have governments at their beck and call – witness their consistent success at dodging tax payments. We compare states and corporations based on how deep their pockets are. States occupy the top rankings, with the US first followed by China and Japan (the eurozone ranks first with more than US$5,600 billion if we treat it as a single political entity). 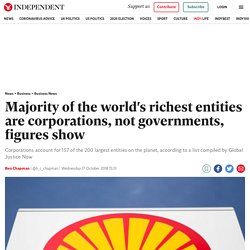 The World’s largest company by revenue, US retail behemoth Walmart, generated sales of more than half a trillion last year, more than the income of all but nine of the world’s 195 national governments. Corporations account for 157 of the 200 largest entities on the planet, according to a list compiled by Global Justice Now. The campaign group compared figures for government revenues from the CIA World Fact Book with company revenues from the Fortune 500 in order to highlight the growing financial clout of large firms.

London-listed Royal Dutch Shell is the fifth-largest firm in the rankings and the second-biggest publicly listed company in the world by revenue, behind Chinese oil company Sinopec. It comes as UN officials meeting in Geneva this week debate a binding treaty seeking to hold transnational corporations to account for human rights abuses around the world. Who's in control – nation states or global corporations? The night in 2002 when Luiz Inácio Lula da Silva won his landslide victory in Brazil's presidential elections, he warned supporters: "So far, it has been easy. 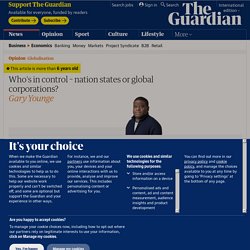 The hard part begins now. " He wasn't wrong. As head of the leftwing Workers' party he was elected on a platform of fighting poverty and redistributing wealth. A year earlier, the party had produced a document, Another Brazil is Possible, laying out its electoral programme. The Real Winners and Losers of Globalization. It is generally thought that two groups are the big winners of the past two decades of globalization: the very rich, and the middle classes of emerging market economies. 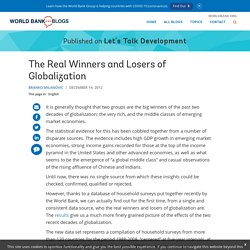 The statistical evidence for this has been cobbled together from a number of disparate sources. The evidence includes high GDP growth in emerging market economies, strong income gains recorded for those at the top of the income pyramid in the United States and other advanced economies, as well as what seems to be the emergence of “a global middle class” and casual observations of the rising affluence of Chinese and Indians. Until now, there was no single source from which these insights could be checked, confirmed, qualified or rejected. Winners and losers from globalisation - Economics Help. Globalisation involves the increased integration and interdependence of the global economy. 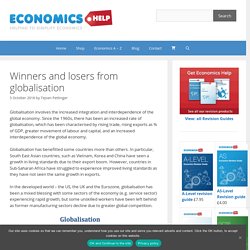 Since the 1960s, there has been an increased rate of globalisation, which has been characterised by rising trade, rising exports as % of GDP, greater movement of labour and capital, and an increased interdependence of the global economy. Globalisation has benefitted some countries more than others. In particular, South East Asian countries, such as Vietnam, Korea and China have seen a growth in living standards due to their export boom. However, countries in Sub-Saharan Africa have struggled to experience improved living standards as they have not seen the same growth in exports. In the developed world – the US, the UK and the Eurozone, globalisation has been a mixed blessing with some sectors of the economy (e.g. service sector) experiencing rapid growth, but some unskilled workers have been left behind as former manufacturing sectors decline due to greater global competition. Fougnercompstate. Taming corporate power: the key political issue of our age.

Does this sometimes feel like a country under enemy occupation? 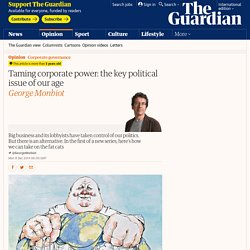 Do you wonder why the demands of so much of the electorate seldom translate into policy? Why parties of the left seem incapable of offering effective opposition to market fundamentalism, let alone proposing coherent alternatives? Do you wonder why those who want a kind and decent and just world, in which both human beings and other living creatures are protected, so often appear to be opposed by the entire political establishment? Effects of Economic Globalization. Put simply, globalization is the connection of different parts of the world. 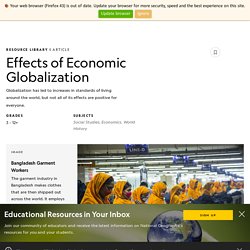 In economics, globalization can be defined as the process in which businesses, organizations, and countries begin operating on an international scale. Globalization is most often used in an economic context, but it also affects and is affected by politics and culture. In general, globalization has been shown to increase the standard of living in developing countries, but some analysts warn that globalization can have a negative effect on local or emerging economies and individual workers. A Historical View Globalization is not new. The rate of globalization has increased in recent years, a result of rapid advancements in communication and transportation. Benefits of Globalization Globalization provides businesses with a competitive advantage by allowing them to source raw materials where they are inexpensive.