PowerPoint as a mode of knowledge production. I think about PowerPoint a lot, and judging by the reams of blog posts, screeds, and instructional books on the topic, I’m not the only one. 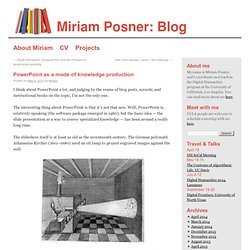 The interesting thing about PowerPoint is that it’s not that new. Well, PowerPoint is, relatively speaking (the software package emerged in 1980), but the basic idea — the slide presentation as a way to convey specialized knowledge — has been around a really long time. The slideshow itself is at least as old as the seventeenth century. The German polymath Athanasius Kircher (1601–1680) used an oil lamp to project engraved images against the wall. Early lantern slide show, from Athanasius Kircher’s Ars Magna (1646) In the following centuries, conjurors and impressarios used magic lantern technology to mount elaborate fantasmagories, haunted houses of sorts in which the images of ghosts floated among audience members. 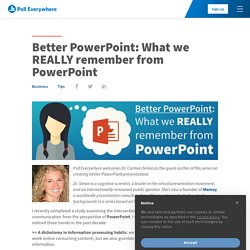 Carmen Simon as the guest author of this series on creating better PowerPoint presentations. Dr. Simon is a cognitive scientist, a leader in the virtual presentation movement, and an internationally renowned public speaker. She’s also a founder of Memzy, a worldwide presentation consulting firm. This is part one (including study background) in a series based on her research published in 2013. I recently completed a study examining the intersection of cognitive psychology and communication from the perspective of PowerPoint.

Delivering a PPT. Instructional Technology. So I’ve been dealing with a problem lately. The problem is with PowerPoint. Now I know that it is a good tool that has many possibilities but recently it has been giving me a headache. And the add ons I own such as Camtasia and Articulate? They’ve added to the mess. Let me explain. How to give an awesome (PowerPoint) presentation ("Simply Stated" animated whiteboard video). 5 Steps To A PowerPoint Redesign. Sharebar Years ago I felt a certain sense of pride because I didn’t know how to use PowerPoint. 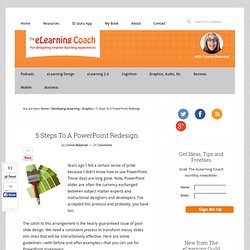 Those days are long gone. Now, PowerPoint slides are often the currency exchanged between subject matter experts and instructional designers and developers. I’ve accepted this protocol and probably, you have too. The catch to this arrangement is the nearly guaranteed issue of poor slide design. Step One: Settle on style and colors Style. Colors. Then select one or two contrasting accent colors for highlights, arrows and other indicators. Step Two: Create theme backgrounds Blank Canvas. Design for Different Learning Events. How to Create a Rapid E-Learning Tab in PowerPoint. A few years back, I was at a workshop where the PowerPoint team was showing some of the new features in the soon-to-be-released PowerPoint 2010. 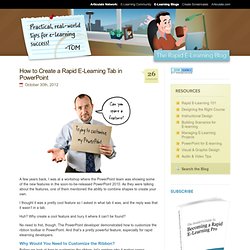 As they were talking about the features, one of them mentioned the ability to combine shapes to create your own. I thought it was a pretty cool feature so I asked in what tab it was, and the reply was that it wasn’t in a tab. Huh? Why create a cool feature and bury it where it can’t be found? No need to fret, though. Why Would You Need to Customize the Ribbon? Before we look at how to customize the ribbon, let’s explore why it makes sense. Teaching with PowerPoint. Using PowerPoint (or not) Part 1. Pedagogy & Powerpoint - Centre for Teaching and Learning Services - Concordia University - Montreal, Quebec, Canada.

PPT use in teaching. Workshop - Teaching with PPT. How do I teach effectively with PowerPoint? .: etc Knowledge Base. Texas Tech University - Teaching, Learning, and Professional Development Center. Prepared by David Forrest See the PDF version Introduction When used thoughtfully, presentation software such as PowerPoint and Keynote (Macintosh) can be very powerful teaching tools. 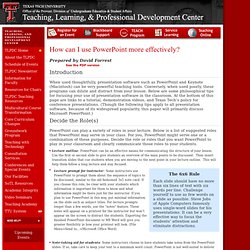 Conversely, when used poorly, these programs can dilute and distract from your lesson. Below are some philosophical tips for focusing your use of presentation software in the classroom. At the bottom of this page are links to a tutorial, demonstration videos, and Texas Tech’s policy for conference presentations. Decide the Role(s) Presenting. Teaching with Technology - Unleashing the Power of PowerPoint. PowerPoint as a tool will not, in and of itself, improve student learning. 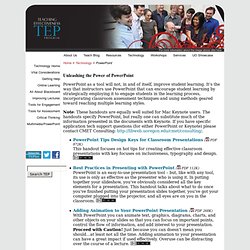 It’s the way that instructors use PowerPoint that can encourage student learning by strategically employing it to engage students in the learning process, incorporating classroom assessment techniques and using methods geared toward reaching multiple learning styles. Note: These handouts are equally well suited for Mac Keynote users. The handouts specify PowerPoint, but really one can substitute much of the information presented in the documents with Keynote. Effective Teaching with PowerPoint: A Learning Theory Approach. The 6 Presenter Types: Which one are you? 3 bullets on a slide. 1 slide per minute. 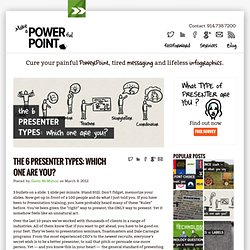 Stand Still. Don’t fidget, memorize your slides. Now get up in front of a 100 people and do what I just told you. If you have been to Presentation training, you have probably heard many of these “Rules” before. How to use quotes in your presentation – 25+ tips from Six Minutes & me. (Naturally, choose a quote by someone who’ll enhance or at least maintain your talk’s credibility. 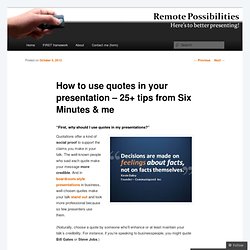 For instance, if you’re speaking to businesspeople, you might quote Bill Gates or Steve Jobs.) Recently on the Six Minutes blog, Andrew Dlugan published a great post about using quotes in your presentations. EffectivelyPresentingContent. More Than 100 PowerPoint Tutorials & a Free Template. With as many PowerPoint questions that I get, it’s a good thing that over the past year or so the elearning community has created about 300 PowerPoint tutorials. 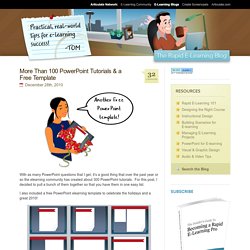 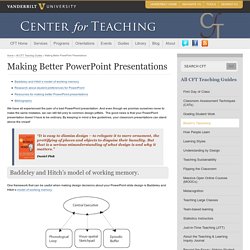 And even though we promise ourselves never to make the same mistakes, we can still fall prey to common design pitfalls. The good news is that your PowerPoint presentation doesn’t have to be ordinary. By keeping in mind a few guidelines, your classroom presentations can stand above the crowd! Powerpoint-quick-reference-2010. Turn the snap to grid and snap to object options on or off - Outlook. When you draw, resize, or move a shape or an object (object: A table, chart, graphic, equation, or other form of information. Objects created in one application, for example spreadsheets, and linked or embedded in another application are OLE objects.), it will align or "snap to" the nearest intersection of lines in the grid (grid: A set of intersecting lines used to align objects.), even if the grid is not visible, or snap to other shapes or objects. If your shape or object does not move where you want, turn off the snap-to options.

To display the grid, see Use grids and guidelines. Don’t Let The Experts Tell You PowerPoint Sucks. Here are some links and resources shared in the presentation I did for the Training Magazine Network on August 18, 2010. PowerPoint Tutorials A bunch of cool PowerPoint tutorials and tips on mind mapping your visual design. Community tutorials: these are added to weekly. Elearningpros. Powerpoint-quick-reference-2007. Pilot study of PPT slide design and students. 5 Easy Tips to Whip Your Slides Into Shape. Tools like Articulate Presenter are great for creating elearning courses.

However, a lot of what you do depends less on the rapid elearning tool and more on your PowerPoint skills. In fact, I get so many emails asking about how to do this or that in PowerPoint, I decided to do a quick series on some essential PowerPoint tips and tricks. So far we’ve looked at: In today’s post, I am going to show some time-saving tips to use when working with PowerPoint shapes. You’ll learn to apply various formatting features, make custom edits, and create the shapes you want.

Sizing Shapes When you click on a shape, you get anchor points on the sides and in the corners. Scale object: If you want to resize the image or object (and not mess up the aspect ratio), then press SHIFT and drag from the corners. Moving Shapes You can move shapes on the screen with the mouse or keyboard. Maintain alignment: What if you want to keep the shape in the same alignment? Creating Silhouettes and Design Elements Using Wordle. One of the things I've been playing around with is finding ways to incorporate tag clouds in my e-learning courses.

Why tag clouds? Because they're a great way to visually communicate key points and concepts. Knowing that PowerPoint has an easy way to fill shapes with pictures, the only challenge was to find a way to quickly generate tag clouds from completed storyboards. And that's where Wordle comes in! How I used the effect I originally thought this would make a good cover slide design. After spending more time with it, I think it can be used could be used for chapter, topic, review and quizzes. A few more possibilities: Tag cloud navigation. 3 Tutorials to Help You Get More Out of PowerPoint’s Image Editing. I know it’s hard to believe, but apparently there are many people who don’t like PowerPoint. Obviously there are a lot of bad presentations created with PowerPoint, but it seems to me the blame rests on the shoulders of the presenter and not the tool. 20 Best PowerPoint Presentation Design Posts for 2012. By Jon, on January 1st, 2012. How to make Interactive Quizzes with PowerPoint.

Use triggers to create an interactive slide show in PowerPoint - PowerPoint. By Shellie Tucker Here's a Power User column for teachers. What’s Wrong with PowerPoint Templates. By Jon The majority of PowerPoint templates are terrible.