I guess it will be my christmas gift to you There will eventually also be posts on my favorite LADSPA plugins, as well as my favorite VSTs for Linux. Focus will be on free and open source plugins. I do use a few commercial plugins as well, but since they’re not open source, I’ll leave them out for another series of posts later on. The goal of this series of posts The goal of this “my favorite plugins for mixing”-posts is pretty simple.

These are all plugins I regularly use, or have regularly used, and feel I can personally recommend. EQ: How & When To Use It. Tips & Techniques Technique : Effects / Processing Equalisation is one of the most powerful tools in your sonic toolkit and can be your greatest enemy or your greatest ally in the battle for the perfect sound. 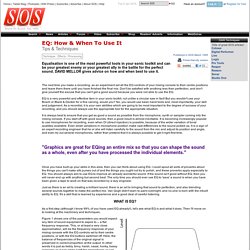 DAVID MELLOR gives advice on how and when best to use it. The next time you make a recording, as an experiment set all the EQ controls of your mixing console to their centre positions and leave them there until you have finished the final mix. Psychoacoustic Enhancers. Technique : Effects / Processing PAUL WHITE looks at the different ways in which the leading enhancers produce their results, and offers some practical advice on where the various types work best. 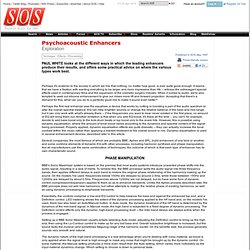 Perhaps it's endemic to the society in which we live that nothing, no matter how good, is ever quite good enough. It seems that we have a fixation with wanting everything to be larger and more impressive than life -- witness the extravagant special effects used in contemporary films and the expansion of the cosmetic surgery industry. Constant-Q Graphic Equalizers. Dennis Bohn, Rane Corporation RaneNotes 101 & 117 combined; written 1982 & 1987; last revised 11/05 Introduction Few would argue the necessity of equalizers for quality sound reinforcement systems.

They are an essential tool that every sound person keeps in their bag of tricks for establishing high quality sound. Without equalizers the system is left without nearly enough controls to turn to try and correct for room difficulties, speaker anomalies, and individual performer preferences. In 1982, Rane Corporation pioneered a new type of graphic equalizer called a Constant-Q Graphic Equalizer to solve one of the most annoying problems that plagued all previous 1/3-octave designs.

The new Constant-Q graphic equalizer circuit topology allows true 1/3-octave bandwidth control at all slider positions. The advantages of the Constant-Q design go far beyond yielding a more accurate picture; they provide a degree of adjustment never before possible. Graphics and Parametrics Figure 1. Mastering with Jamin. Okay, you’ve laid all your tracks, mixed them into a good arrangement, adjusted them to their clearest, and now you’re ready to start the process of mastering them. 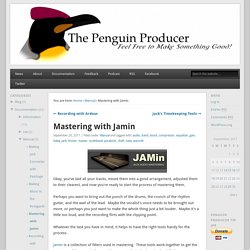 Perhaps you want to bring out the punch of the drums, the crunch of the rhythm guitar, and the wail of the lead. Maybe the vocalist’s voice needs to be brought out more, or perhaps you just want to make the whole thing just a bit louder. Maybe it’s a little too loud, and the recording flirts with the clipping point. Linux Audio User FAQ (Frequently Asked Questions) [Linux-Sound] General Q: Where to ask a question ? 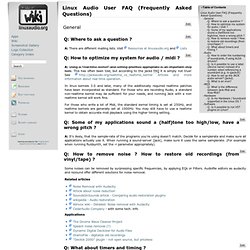 Q: How to optimize my system for audio / midi ? A: Using a “real-time kernel” and setting priorities appropriate is an important step here. This has often been told, but according to the jackd FAQ it is simply not true! See and more information about real time operation. In linux kernels 3.0 and later, many of the additionally required realtime patches have been incorporated as standard. Tips in Mixing Electric Guitars using "Double Tracking" Technique. One of the key elements in rock mix is thick and heavy guitar sound. One of the effective ways to accomplish this sound in the mixing process is through a technique called as “Double Tracking”. In this post I will illustrate how to double track guitars in the mix with the objective of making it heavy and thick. Also in the last section of this article, you will also know the general guidelines on mixing guitar tracks in your home studio that utilizes different techniques depending on how the guitar is recorded.

Recording the guitar properly for Double Tracking Photo credits: The Well-Tempered Computer. Using Hardware Effects With Your PC Software Studio. Do you use a software studio with plug-in effects but crave the effects quality that your favourite hardware processor used to provide? 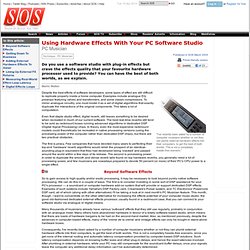 You can have the best of both worlds, as we explain. Martin Walker Despite the best efforts of software developers, some types of effect are still difficult to replicate properly inside a home computer. Examples include analogue EQ, preamps featuring valves and transformers, and some classic compressors. To mimic analogue circuitry, one must model it as a set of digital algorithms that exactly duplicate the interactions of the original components.

Even that staple studio effect, digital reverb, still leaves something to be desired when recreated in much of our current software. The first is piracy. Beyond Software Effects So to gain access to high-quality and/or exotic processing, it may be necessary to look beyond purely native software processing. Frequencies of Musical Notes. Other tuning choices, A4 = Speed of Sound = 345 m/s = 1130 ft/s = 770 miles/hrMore about Speed of Sound ("Middle C" is C4 ) (To convert lengths in cm to inches, divide by 2.54) More information on the equal tempered scaleEquations used for this table Questions/Comments to: suits@mtu.edu There are no pop-ups or ads of any kind on these pages. 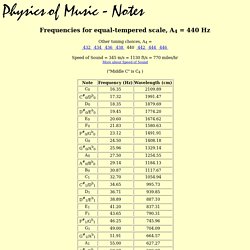 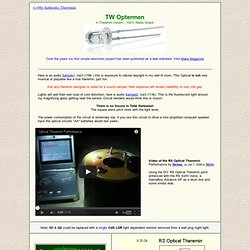 Line out can connect to a medium size speaker directly. A C2 220 uf cap would be better for below 100 hz. Go sub-sonic and shake the walls! Interfacing Professional Microphones to Computer Sound Cards. A simple speaker simulator. Description. 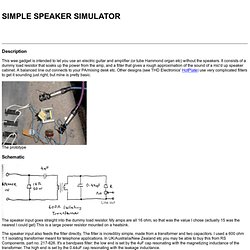 GainClone Experiments. Simple mixer. Copyright Tomi Engdahl 1997,1999 Introduction Sometimes there is need to combine the output of two line level audio sources to be fed to one input. A standard way in professional audio is to use a mixing desk, but on home audio system you might want to look for a simpler and less expensive alternative.