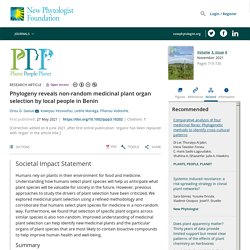 However, in comparison with ecological studies, little effort has been devoted to uncovering what predisposes a given species to human selection for a particular use. Yet harvesting non-timber forest products (NTFPs) for medicinal or food purposes is widespread with significant implications not only for the livelihood of the people who depend on it (Belcher et al., 2005; Shackleton et al., 2005) but also for the ecological integrity of the systems that are harvested (Gaoue et al., 2013; Moegenburg & Levey, 2002; Silvertown, 2004; Ticktin, 2004). Human selection of medicinal plants has been considered a random behavior and their use based on a “placebo effect” (Adler & Hammett, 1973) or according to the doctrine of signature (Bennett, 2007). Operationalizing the CARE and FAIR Principles for Indigenous data futures. The FAIR Principles are aligned to the global shift towards open science and open data, promoting data centric criteria that facilitate increased data sharing among entities while ignoring relationships, power differentials, and the historical conditions associated with the collection of data10,11. 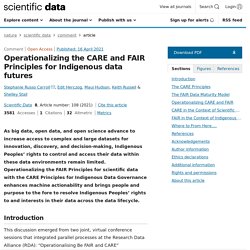 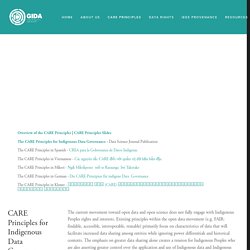 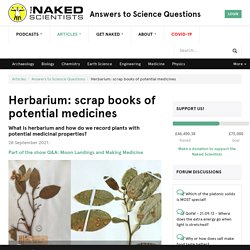 Chris - I'm intrigued by your role as someone who runs a herbarium because there was a great story a few years back where scientists worked out from stored specimens, what caused the Irish potato famine. That was done in the Southeast of the UK. They happened to have a specimen and they could work out what caused something that happened historically over 150 years ago. Are you able to delve into what you've got in herbaria to find treatments, or are you having to actually get out there in the wild and look at the real deal? Cassandra - That's a great question. Chris - Going back to something we were talking about earlier with climate change causing loss of plant species, we've also got the technological revolution causing loss of some cultural values. Extinction of Indigenous languages leads to loss of exclusive knowledge about medicinal plants. A study at the University of Zurich in Switzerland shows that a large proportion of existing medicinal plant knowledge is linked to threatened Indigenous languages. 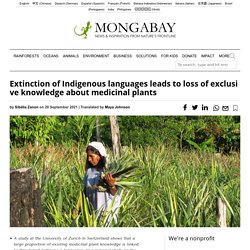 In a regional study on the Amazon, New Guinea and North America, researchers concluded that 75% of medicinal plant uses are known in only one language.The study evaluated 645 plant species in the northwestern Amazon and their medicinal uses, according to the oral tradition of 37 languages. It found that 91% of this knowledge exists in a single language, and that the extinction of that language implies the loss of the medicinal knowledge as well.In Brazil, Indigenous schools hold an important role in preserving languages alongside cataloguing and revitalization projects like those held by the Karitiana people in Rondônia and the Pataxó in Bahia and Minas Gerais.

The project Ethnologue concluded that 42% of the world’s more than 7,000 existing languages are endangered. Double the challenge. Could the way you access &amp; share genetic data change in the future? Join @AIBSBiology &amp; USA Nagoya Protocol Action Group this fall for @NSF-sponsored workshops on the impacts of regulating digital sequence information. Sign up for alerts #LearnNag.

The following piece on plantation worlds concludes our series on the Plantationocene—a proposed alternate name for the epoch often called the Anthropocene. 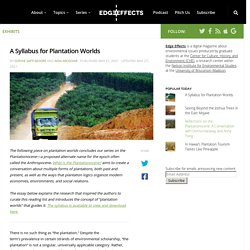 What is the Plantationocene? Aims to create a conversation about multiple forms of plantations, both past and present, as well as the ways that plantation logics organize modern economies, environments, and social relations. Plantationocene Seminar Spring 2019 Syllabus. Digital Image Analysis of Spices and Condiments for Plant Taxonomic Studies. What is the Plantationocene? - The Edge Effects Series. South Dakota State University. The Wokini Initiative is SDSU’s collaborative and holistic framework to support American Indian student success and Indigenous Nation-building. 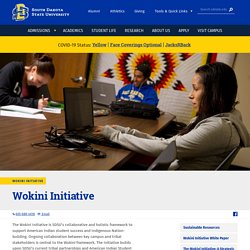 Collaboration between key campus and tribal stakeholders is central to the Wokini framework: Overview. How Did a Self-Taught Linguist Come to Own an Indigenous Language? Siebert died on January 23, 1998, at the age of eighty-five. 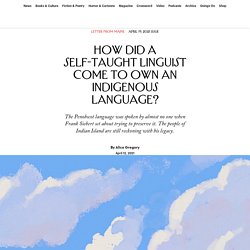 His funeral, held three days later, in Philadelphia, was attended by a dozen members of Siebert’s extended family and three other people: Bishop; Clarence Wolf, the Philadelphia-based bookseller who had thought Siebert was homeless; and an elderly man nobody knew, who said that he remembered Siebert from the Cub Scouts. Recalling that day, Wolf sounded as though he were reciting a fairy tale: “These two young women . . . of very modest means . . . suddenly came into a great sum of money.” Then he got hold of himself. “The whole thing was just so odd.” We have about a hundred specimens with Irish names, collected mainly in Kerry, Donegal and Mayo @NBGGlasnevin. Petasites is very common on roadsides. You will probably smell the lovely coconut before you see it. For Seachtain na Gaeilge @SnaGaeilge #SnaG21 here is a specimen with it's Irish name. From Dirt - Emergence Magazine.

On the property of Thomas Jefferson’s retreat home, Poplar Forest, archeologists have discovered caches of food that give insight into the diet of the enslaved men and women who lived on that property. 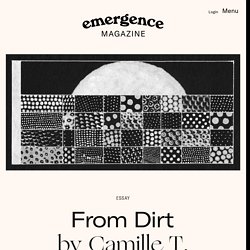 The very produce of the earth has provided a lasting record of who on that land had what type of access, autonomy, and power. The list of foods found in the storage pits reveals the epidemic of deprivation endemic to the institution of slavery—but it also reveals the strategies of a people insistent on nourishing themselves. Archeological studies suggest that the people at Poplar Forest grew corn in their gardens.

A Digitization Case Study for Oak Spring Garden Foundation: A Specialized Approach for a Special Collection. OSGF is committed to serving the public interest by facilitating scholarship and public dialogue on horticulture and the history and future of plants through the gifts of Rachel “Bunny” Lambert Mellon’s estate and gardens. 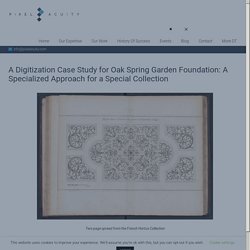 The Oak Spring Garden Library holds over 19,000 unique objects, including rare books, manuscripts, and paintings. Most of which relate to horticulture, landscape design, botany, architecture, and the decorative arts. Rare and specialized collections like these provide essential historical and cultural context for scholars within a broad range of disciplines. OSGF is currently undergoing a massive project to digitize large categories of its collection. How Indigenous ‘traditional ecological knowledge’ teaches us to live in reciprocity with the land. Land has been a central issue between Natives and non-Natives since the earliest days when European explorers first were greeted by the indigenous peoples of North America. Since then American settlers have robbed and exploited tribal lands, cared for and held sacred for generations by hundreds of American Indian tribes.

As local communities continue to acknowledge that history and what lessons can be learned from Indigenous people in terms of agriculture or conservation? Mainstreaming biodiversity conservation and climate resilience at Yayu Biosphere Reserve (Ethiopia) Yayu Reserve covers 167,000 hectares and is home to around 450 higher plants, 50 mammal, 200 bird, and 20 amphibian species. It is also an important storehouse of wild crop genetic resources, most notably for Arabica coffee (Coffea arabica). Coffee farming occurs within the forests of the buffer zone and transition areas of the reserve, and generates up to 70% of the cash income for over 90% of the local population. However, most farmers in the area are struggling to make sufficient income from coffee, which can cause a conversion away from forest-based coffee production to non-forest crops.

This leads to forest loss, a reduction in biodiversity and ecosystem services, and a narrowing of income diversity. The most important factors restricting coffee income at Yayu are coffee quality and access to the export market. Natural History Spiritualized: Civilizing Islanders, Cultivating Breadfruit, and Collecting Souls. The evolution of ethnobotany. Jonathan Ferrier: (Ojibwe introduction) Aanii, boozhoo, Jonathan Ferrier nindizhinikaaz Anishinaabeinini . I’m a professor of biology at Dalhousie University.

(Fade in music) Jonathan Ferrier: I take the tradition of studying the world around me from my father, and enjoy passing those traditions on to my daughter and sharing them with my First Nation — the Mississaugas of the Credit. Lauren Leffer: Jonathan Ferrier is Indigenous, of the Anishinaabe people. He’s also an ethnobotanist. Lauren Leffer: In her work to identify plants to study and analyze, Cassandra relies on local community collaborators, who share their knowledge of useful plants. Col Gordon, Lessons from Seed - The Learned Pig. “Open world begins with place, not with simple piety of place, but with knowledge (informed, sentient, intelligent) of place.

Thoroughly known, every place is open. From the smallest rivulet, via a network of rivers, one arrives at the ocean. A little geology allows one to know that not all the stones on the local beach are necessarily of local origin, that glaciers may have brought them in from elsewhere. Likewise, from a layer of local rock one can move across nation and continents. Plant of the Month: Cinnamon. Today, most medicines are produced by big pharmaceutical companies. Black Bears, Black Liberation - Patagonia.

What’s in a name? Revisiting medicinal and religious plants at an Amazonian market. Medicinal plants at the Ver-o-Peso Our results give an up-to-date botanical inventory of the VOP, one of the largest open markets in South America, which is often quoted in ethnobotanical review studies [11, 14, 18]. Reshaping the future of ethnobiology research after the COVID-19 pandemic. What is ethnobotany? TeachEthnobotany. From maker to museum: Polynesian barkcloth at the Royal Botanic Gardens, Kew - Royal Botanic Gardens, Kew research repository. Sue Spaid, Bees, Art and Biodiversity - The Learned Pig.

This is an edited version of the transcript from Be Biodiverse: Bees, Art and Diversity, a talk given by Sue Spaid in September 2020, part of an event organised by by Eksjö museum in Sweden. Click here to watch the talk, or read on… ByeJrLinares. Wild plants' little-known uses captured in Food of the Forest project. Imagine if your fruits and vegetables, beauty products, medicine and most of what you need in life came from the local forest outside your house. Forgotten forests: a journey to see the forests most often overlooked. This story is the first of the Landscape News series Forgotten Forests. Promoting social and environmental justice to support Indigenous partnerships in urban ecosystem restoration - Hall - - Restoration Ecology.

Evol., 30 (2015), pp. 373-374. Watering the Gardens of the Grandmother of Plants — The Ethnobotanical Assembly. Revolutionary archaeology reveals the deepest possible Anthropocene. Becoming Sensor in the Planthroposcene: An Interview with Natasha Myers. View of The Central Role of Taxonomy in the Study of Neotropical Biodiversity. Kim Walker. Four Noble Plants in Chinese Culture Part 2: Orchid – Stories from the Museum Floor. Heritage Futures – UCL Press. Centuries After Their Loss and Theft, Native American Seeds Are Reuniting With Their Tribes. Open House London 2019 - Royal Holloway, University of London. Sebestian Kroupa on Global Histories of Science and Medicine in the Early Modern Philippines – The Global History Podcast.

Intuiting the archive — Rebecca Beinart. Explore. Nova pesquisa sobre as coleções de Richard Spruce na Amazônia: uma colaboração Brasil-Reino Unido. Journal of the History of Collections. Ancient Tropical Trees Have Tales To Tell. Another great group today from the @UKTeaAcademy discussing our selection of compressed teas among others familiar and not... This week has highlighted the many unfamiliar and intriguing objects from @kewgardens #economicbotany collection. #tea #history. V.54-55(1964-1965) - American fern journal. On a recent field trip,I learnt that species named after places can give pride and a sense of responsibility to locals. Invaluable for conservation! This is #Calamus lambirensis, home to #Borneo's incredibly diverse #LambirHillsNP and surrounding regions. Natural Sciences Collections Association.