Departure Bay, Nanaimo, BC. THE 10 BEST Restaurants in Parksville Updated July 2019. LETTER TO THE EDITOR: Intersection making people upset – Nanaimo News Bulletin. To the editor, I would like to comment on the dangerous traffic problem at the corner of Front Street where the Gabriola ferry terminal traffic and the shopping centre traffic lights are. 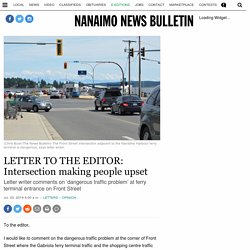 I was almost run down by a car whose driver came within two feet of hitting me because she was looking the other way while making her turn leaving the mall. There was a young family with two small children close to me on my right. In the middle of the street there was a car whose driver was unaware that the left turn from Front Street to the ferry terminal is not allowed any longer. Nanaimo is the next stop on ‘The Amazing Race Canada’ – Nanaimo News Bulletin. Nanaimo will be the next stop on The Amazing Race Canada. 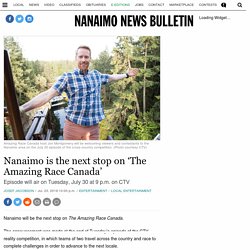 The announcement was made at the end of Tuesday’s episode of the CTV reality competition, in which teams of two travel across the country and race to complete challenges in order to advance to the next locale. The Nanaimo episode marks a return to the Island for The Amazing Race Canada. Last season’s race began at Hatley Park National Historic Site in Colwood outside Victoria, and after a swing through B.C. and the Yukon the contestants were back in the area for challenges on Salt Spring Island, Duncan and Shawnigan Lake. Amazing Race Canada executive producer Mark Lysakowski calls the Island “a beautiful oasis in the country.” 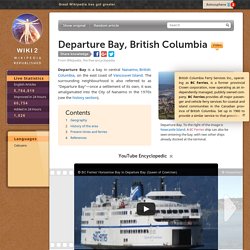 To the right of the image is Newcastle Island. A BC Ferries ship can also be seen entering the bay, with two other ships already docked at the terminal. Departure Bay is a bay in central Nanaimo, British Columbia, on the east coast of Vancouver Island. The surrounding neighbourhood is also referred to as "Departure Bay"—once a settlement of its own, it was amalgamated into the City of Nanaimo in the 1970s (see the history section). YouTube Encyclopedic ✪ BC Ferries' Horseshoe Bay to Departure Bay (Queen of Cowichan)✪ Horseshoe to Departure Bay Terminal, British Columbia, BC Ferries✪ BC Ferries ship departs Horseshoe Bay near Vancouver for Departure Bay (Vancouver Island) 2010-09-07 Geography Jesse Island (with navigational marker). B.C. man dies of rabies after coming into contact with bat. A 21-year-old B.C. man has died of rabies after coming into contact with a bat on Vancouver Island, according to provincial health officer Dr. 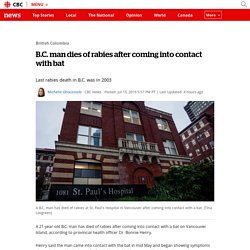 Bonnie Henry. Henry said the man came into contact with the bat in mid May and began showing symptoms six weeks later. He died at at St. Paul's Hospital in Vancouver. Hallo from Vancouver island Canada. Greetings wise forum members. 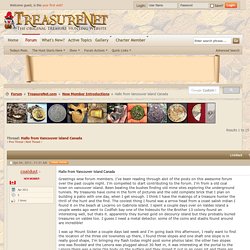 Finding the perfect BC Beach may mean heading out of town. Think of a beach in British Columbia, and you probably imagine the steady cadence of waves crashing against a rocky shoreline. 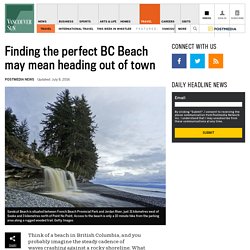 What about warm water and white sand? Or urban gems that boast striking views of the city? In BC, there’s a beach that’s perfect for everyone from lazy sun lovers to active thrill seekers. Few know the pull of the ocean like Charles McDiarmid. Nanaimo Museum. The Bastion is an enduring local icon in the third oldest city in British Columbia. 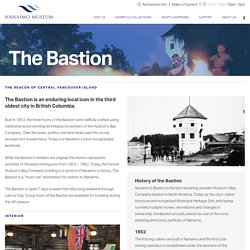 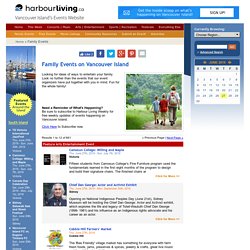 Look no further than the events that our event organizers have put together with you in mind. Fun for the whole family! Need a Reminder of What's Happening? Be sure to subscribe to Harbour Living Weekly for free weekly updates of events happening on Vancouver Island. Click Here to Subscribe now. Feature Arts Entertainment Event. Nanaimo, Canada All Events. Top things to do in Nanaimo, Canada. THE 15 BEST Things to Do in Nanaimo - UPDATED 2019 - Must See Attractions in Nanaimo, BC. A little gem! - Nanaimo Museum, Nanaimo Traveller Reviews. Fun With Mayor Frank Ney. Departure Bay. This walking tour will cover the fascinating history of Departure Bay, the broad sweep of coast north of Nanaimo. 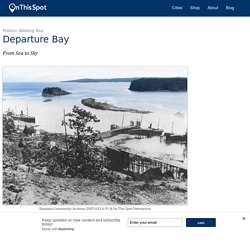 Nanaimo Bathtub Race and Marine Festival. Last year, I got to witness competitor Jamie Garcia ripping around in a wicked fast bathtub. 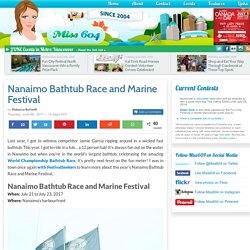 This year, I got to ride in a tub… a 12 person tub! It’s always fun out on the water in Nanaimo but when you’re in the world’s largest bathtub, celebrating the amazing World Championship Bathtub Race, it’s pretty next-level on the fun meter! I was in town once again with FestivalSeekers to learn more about this year’s Nanaimo Bathtub Race and Marine Festival. When: July 21 to July 23, 2017Where: Nanaimo’s harbourfront I stepped aboard the world’s largest bathtub, where prime ministers and other dignitaries have stood, and we set sail through the channel and over to Departure Bay. World Championship Bathtub Race.

The first Great International World Championship Bathtub Race took place in Nanaimo BC in 1967, and this year marks the 51st year of the races. The Great International World Championship Bathtub Race runs every July in Nanaimo BC, and draws competitors from across Canada, the United States and even as far away as Australia and New Zealand, making it truly an international event. Splish, splash, speed! #ExploreNanaimo Bathtub Race Weekend-Arrowsmith Media. What keeps car buyers from switching to electric vehicles? More manufacturers are building electric vehicles, but people still aren’t buying them in record numbers. In 2018, EV sales accounted for just about 3 per cent of new car sales in Canada. Some say price is a major stumbling block to EV adoption, but others disagree. “Everybody thinks EVs are too expensive mainly because they’ve heard of Tesla and nothing else.

They don’t know there are 40 makes and models out there and lots of price ranges,” said Cara Clairman, president and chief executive officer of Plug‘n Drive, the world’s first Electric Vehicle Discovery Centre in North York, Ont. The non-profit organization is designed to educate consumers about the economic and environmental benefits of EVs. While many EVs cost $30,000 to $55,000, there is a premium to pay for going green, anywhere from an extra $5,000 or more compared with an equivalent gas-powered car. Story continues below advertisement. Are our power grids ready for an electric vehicle surge? By 2040, Ottawa wants every new vehicle sold to be able to drive without producing CO2 emissions. If that comes about, it means new car buyers in 21 years will have three options: plug-in hybrids (PHEVs), battery-electric vehicles (BEVs) or hydrogen fuel-cell vehicles.

If people choose PHEVs or BEVs, that will mean a lot more vehicles plugging in for charging. Worldwide, more than four million BEVs and PHEVs have been sold so far – and that’s been predicted to increase to 125 million by 2030. Story continues below advertisement. Researchers alarmed as another adult southern resident killer whale and calf found in poor health. A female adult Southern resident killer whale and her three-and-a-half-year-old calf are rapidly declining in health in what appears to be a troubling situation for the creatures. Scientists from the National Oceanic and Atmospheric Administration in the United States recently released photos taken by a drone that show the adult known as J17 had deteriorated in health since she was assessed last fall.