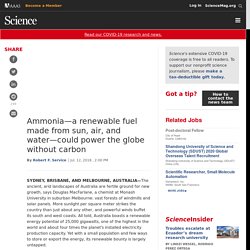 More sunlight per square meter strikes the country than just about any other, and powerful winds buffet its south and west coasts. All told, Australia boasts a renewable energy potential of 25,000 gigawatts, one of the highest in the world and about four times the planet's installed electricity production capacity. Yet with a small population and few ways to store or export the energy, its renewable bounty is largely untapped. That's where MacFarlane comes in. For the past 4 years, he has been working on a fuel cell that can convert renewable electricity into a carbon-free fuel: ammonia. Ammonia—one nitrogen atom bonded to three hydrogen atoms—may not seem like an ideal fuel: The chemical, used in household cleaners, smells foul and is toxic. The Royal Society sur Twitter : "Decarbonisation Information: Ammonia production can be decarbonised to produce zero-carbon or green ammonia – made using sustainable electricity, water and air #GreenAmmonia #renewableenergy #zeroca.

The Royal Society sur Twitter : "Marine case study contd. Benefits include retrofitting potential, ease of storage, existing maritime networks and bunkering capabilities, flexible use in combustion engines and fuel cells. #GreenAmm. Bill (@wifdavid) was also on the @BBCRadio4 #TodayProgramme this morning to speak about #GreenAmmonia - you can hear him at 44min15 here. Ammonia Energy Association. Climate change: Fertiliser could be used to power ocean-going ships. Image copyright Getty Images Ocean-going ships could be powered by ammonia within the decade as the shipping industry takes action to curb carbon emissions. 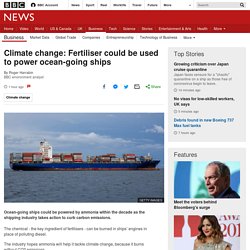 The chemical - the key ingredient of fertilisers - can be burned in ships’ engines in place of polluting diesel. The industry hopes ammonia will help it tackle climate change, because it burns without CO2 emissions. The creation of the ammonia itself creates substantial CO2, but a report says technology can solve this problem. The challenge is huge, because shipping produces around 2% of global carbon emissions – about the same as the whole German economy. Making ammonia is also a major source of carbon. But the authors of the report say new technology can create zero carbon ammonia. Another way of making so-called "green" ammonia is to use renewable energy which doesn't create any CO2. But the big question is whether enough clean energy will be available to create ammonia at scale in the coming decades. Ammonia storage - WIND ENERGY STORAGE. Why Ammonia? 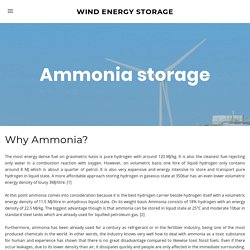 The most energy dense fuel on gravimetric basis is pure hydrogen with around 120 MJ/kg. It is also the cleanest fuel rejecting only water in a combustion reaction with oxygen. However, on volumetric basis one litre of liquid hydrogen only contains around 8 MJ which is about a quarter of petrol. It is also very expensive and energy intensive to store and transport pure hydrogen in liquid state.

A more affordable approach storing hydrogen in gaseous state at 350bar has an even lower volumetric energy density of lousy 3MJ/litre. [1]At this point ammonia comes into consideration because it is the best hydrogen carrier beside hydrogen itself with a volumetric energy density of 11.5 MJ/litre in anhydrous liquid state. How to produce Ammonia? The ammonia synthesis or Haber-Bosch process was invented by the German chemists Fritz Haber and Carl Bosch in 1909.

The overall process of producing ammonia and utilizing it again is shown in the schematic above.