Evidence Of Carnivory In Teasel — In Defense of Plants. By systematically supplying teasel plants with insect prey, the team was able to look at how plants responded to the addition of a potential meal. 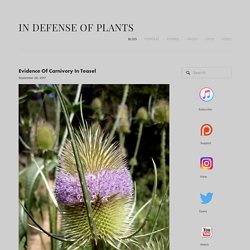 They added various levels of insect larvae to some plants and removed them from others. For their study, evidence would come in the form of some sort of physiological response to the feeding treatments. If teasel really is obtaining nutrients from its insect victims, it stands to reason that those nutrients would be allocated to either growth or reproduction. The resulting data offers the first evidence that teasel may in fact be benefiting from the insect carcasses. Although the team found no evidence that plants supplemented with insects were increasing in overall biomass, they did see a positive effect on not only the number of seeds produced but also their size. As exciting as these finds are, one must temper their expectations. Further Reading: [1] The Social Life of Forests. The Social Life of Forests By Ferris Jabr Photographs by Brendan George Ko As a child, Suzanne Simard often roamed Canada’s old-growth forests with her siblings, building forts from fallen branches, foraging mushrooms and huckleberries and occasionally eating handfuls of dirt (she liked the taste). 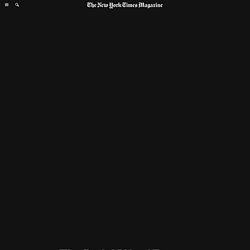 Her grandfather and uncles, meanwhile, worked nearby as horse loggers, using low-impact methods to selectively harvest cedar, Douglas fir and white pine. They took so few trees that Simard never noticed much of a difference. The forest seemed ageless and infinite, pillared with conifers, jeweled with raindrops and brimming with ferns and fairy bells.

Questions About Trees. “The woods are lovely, dark and deep,” wrote Robert Frost. 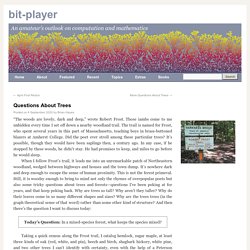 Those iambs come to me unbidden every time I set off down a nearby woodland trail. The trail is named for Frost, who spent several years in this part of Massachusetts, teaching boys in brass-buttoned blazers at Amherst College. Did the poet ever stroll among these particular trees? It’s possible, though they would have been saplings then, a century ago. In any case, if he stopped by these woods, he didn’t stay. When I follow Frost’s trail, it leads me into an unremarkable patch of Northeastern woodland, wedged between highways and houses and the town dump. Today’s Question: In a mixed-species forest, what keeps the species mixed? , anraich-hedge-druid: tropicalhomestead: ... Was the Venus flytrap brought to earth by a meteor? – The Straight Dope.

There are no scientists puzzled about the Venus flytrap, only “scientists.” 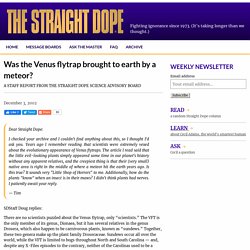 The VFT is the only member of its genus, Dionaea, but it has several relatives in the genus Drosera, which also happen to be carnivorous plants, known as “sundews.” Together, these two genera make up the plant family Droseraceae. Sundews occur all over the world, while the VFT is limited to bogs throughout North and South Carolina — and, despite any X-Files episodes to the contrary, neither of the Carolinas used to be a meteor crater. As for their closing mechanism, it’s quite well-documented and straightforward, involving very small-scale localized electrical current, triggered by the touching of special hairs on the leaf, and the selective swelling of certain cells. You can find out more on various websites such as here. Similar rapid leaf movements occur in sundews and various other plants, such as Mimosa (“sensitive plant”). 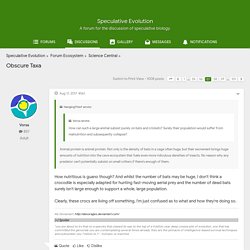 Surely their population would suffer from malnutrition and subsequently collapse? Animal protein is animal protein. Not only is the density of bats in a cage often huge, but their excrement brings huge amounts of nutrition into the cave ecosystem that fuels even more ridiculous densities of insects. How nutritious is guano though? Clearly, these crocs are living off something, I'm just confused as to what and how they're doing so.

My Deviantart: [+] Spoiler "you are about to try that on a species that clawed its way to the top of a 4 billion year deep corpse pile of evolution. one that has committed the genocide you are contemplating several times already. they are the pinnacle of intelligence-based survival techniques and outnumber you 7 billion to 1" - humans vs machine. Sometimes it’s tough being a tree… – hortographical. The red galls on the top of the leaf are caused by the leaf’s reaction to damage inflicted by gall mites feeding. 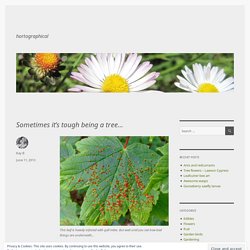 In response to the grazing, the leaf makes a little dome (the gall) and later on the mite lays its eggs inside that gall, where the larvae will hatch out and continue feeding and growing, perpetuating the infestation. The white fluffy looking coating between the major veins on the underside of the leaf is also caused by the leaf reacting to a gall mite. This time, it is a felt gall mite. Apparently a chemical in the mites’ saliva somehow stimulates the tree to produce lots of tiny hairs: which are what the fluffy stuff actually is – tiny little hairs. Potato home invasion.