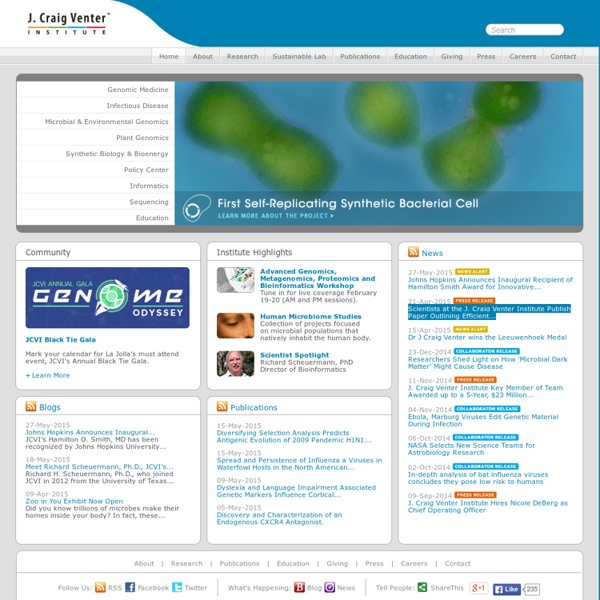 Top 7 in Molecular Biology A snapshot of the most highly ranked articles in molecular biology and related areas, from Faculty of 1000 1. Lighting up RNA A novel technique for tagging and following RNA processes in live cells promises to illuminate RNA biology the way green fluorescent protein (GFP) did for the study of proteins. The tagging method consists of short RNA sequences that bind to GFP-like fluorophores and produce a wide range of colors. These RNA-fluorophore complexes can then be fused to RNAs in the cell. J.S. 2. Though large swaths of non-coding RNAs exist in mammals, no one had clearly explained their role. M. 3. Budding yeast is one of the few species that lack RNA interference, a process in which small RNA molecules affect gene expression and is essential for most eukaryotic species. I.A. 4. Chromosome segregation during meiosis and mitosis must be tightly regulated to keep in time with the cell cycle. J. 5. M. 6. J. 7. U.

About / Bios / J. Craig Venter Research Interests and Accomplishments J. Craig Venter, Ph.D., is regarded as one of the leading scientists of the 21st century for his numerous invaluable contributions to genomic research. He is Founder, Chairman, and CEO of the J. Craig Venter Institute (JCVI), a not-for-profit, research organization with approximately 300 scientists and staff dedicated to human, microbial, plant, synthetic and environmental genomic research, and the exploration of social and ethical issues in genomics. Dr. Dr. In 1998, Dr. Dr. Dr. Select Publications First monkeys with customized mutations born Niu et al., Cell Twin cynomolgus monkeys born in China are the first with mutations in specific target genes. The ultimate potential of precision gene-editing techniques is beginning to be realised. Xingxu Huang, a geneticist at the Model Animal Research Center of Nanjing University in China, and his colleagues successfully engineered twin cynomolgus monkeys (Macaca fascicularis) with two targeted mutations using the CRISPR/Cas9 system — a technology that has taken the field of genetic engineering by storm in the past year. "This is an important step," says Feng Zhang, a synthetic biologist who was not involved in the study, but who has helped to develop CRISPR technology at the Massachusetts Institute of Technology in Cambridge. Primate push Transgenic mice have long dominated as models for human diseases, in part because scientists have honed a gene-editing method for the animals that uses homologous recombination — rare, spontaneous DNA-swapping events — to introduce mutations.

Anousheh Ansari Anousheh Ansari (Persian: انوشه انصاری‎; née Raissyan;[4] born September 12, 1966, in Mashhad, Iran) is an Iranian-American engineer and co-founder and chairwoman of Prodea Systems. Her previous business accomplishments include serving as co-founder and CEO of Telecom Technologies, Inc. (TTI). Early life[edit] Anousheh Ansari was born in Mashhad, Iran. She received her Bachelor of Science degree in electrical engineering and computer science at George Mason University in Fairfax, Virginia, and her master's degree at George Washington University in Washington D.C.[5][10][11] After graduation, Anousheh began work at MCI, where she met her future husband, Hamid Ansari. Ansari resides in Plano, Texas. Business career[edit] In 1993, she persuaded her husband, Hamid Ansari, and her brother-in-law, Amir Ansari, to co-found Telecom Technologies Inc, using their savings and corporate retirement accounts, as a wave of deregulation hit the telecommunications industry. Space[edit] Spaceflight[edit]

Top 7 in Cancer Biology A snapshot of the most highly ranked articles in cancer biology and related areas, from Faculty of 1000 Newt lung cells in early anaphaseNATIONAL INSTITUTE OF HEALTH 1. Researchers uncovered the pulses of external signaling factors that push resting cells to divide. Y. 2. Just before cells divide, chromosomes must duplicate and separate in a coordinated dance. L. 3. While many tissue types stop growing when nutrients are scarce, Drosophila brain tissue continues to grow, even when starved for food. L. Drosophila 4. Researchers showed that the septin cytoskeleton, a network of filamentous proteins, plays a critical role in directing microtubules reorganization. J. 5. In budding yeast, it was known that the kinetochores—the spots on chromosomes where spindle fibers separate chromosomes during cell division—rely on methylation of a protein called DAM1. J. 6. J. 7. Y.F.

ASBH Home Page Craig Venter Early life and education[edit] Venter was born in Salt Lake City, Utah, the son of Elizabeth and John Venter.[6] In his youth, he did not take his education seriously, preferring to spend his time on the water in boats or surfing.[7] According to his biography, A Life Decoded, he was said to never be a terribly engaged student, having Cs and Ds on his eighth-grade report cards.[8] He graduated from Mills High School in Millbrae, California. Although he was against the Vietnam War,[9] Venter was drafted and enlisted in the United States Navy where he worked in the intensive-care ward of a field hospital.[10] While in Vietnam, he attempted suicide by swimming out to sea, but changed his mind more than a mile out.[11] Being confronted with wounded, maimed, and dying soldiers on a daily basis instilled in him a desire to study medicine[12] — although he later switched to biomedical research. Venter began his college career at a community college, College of San Mateo in California.