Early screens. Payphones. Typewriter. Computer mouse. E Mail. Weight of data. Folding smartphone. Early software. Past predictions. #OnThisDay 1999: What would the 21st Century home look like? Tomorrow's World had a look into what the next millenium could bring.… Early computers. PowerPoint. Black plastic.

Audio. Simon Kuestenmacher sur Twitter : "Survey by @YouGov asked kids (6-18) to identify objects on photographs. 67% didn’t recognize a floppy disk, 71% didn’t know what an overhead projector was, 23% were puzzled by a postcard. Interesting way to show the spee. New Zealand at the forefront of early computer controlled railways. Reported in #SouthernRailwayMagazine 1947 #NewZealand…

Exponential Increase of the Electrical Efficiency of Computing by @MaxCRoser @OurWorldInData. Tablets iPads etc. The first Apple Mac ad, directed by Ridley Scott, shown during the 1984 Superbowl and lovingly ripped off from Orwell's novel.… 1968: if only computers existed 1978: if only more people had computers 1988: if only the computers were all connected 1998: if only the computers could fit in a pocket 2008: if only everyone talked to each other using their.

The origin of bluetooth… 35 years ago this week, the Compact Disc came to Europe and North America. #OldMusicFriday… “no online database will replace your daily newspaper” Great opinion piece from 1995 in why the Internet will fail. Can't believe I haven't seen the Windows 95 launch party video until now.…

… *****I am watching a video from Mars on a computer in my hand. Just sayin'… Video of Isaac Asimov describing his three laws of robotics… The Brummie who gave birth the World Wide Web #wmgeneration come on @channel4 relocate to Brum creativity is in our genes. In stories you couldn't make up. Hawaii Governor David Ige couldn't tell people that a missile alert was a false alarm because he forgot his Twitter password!

The four tech superpowers changing our world. The term ‘superpowers’ conjures an image of major nations shaping the course of global history. 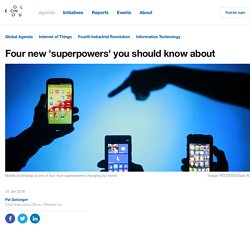 But in the digital era, I believe it’s time we expanded that definition to include four extraordinary technological superpowers that promise to wield as much influence over the next 20 years as any nation state: mobile technology, the cloud, artificial intelligence (AI) and the internet of things (IoT). Each of these capabilities is transformative in its own right, but together they unlock game-changing opportunities that have not been available to us until this moment in history. And we are just beginning to tap their full potential.

Mobile technology provides unprecedented reach, connecting people on the move no matter where they are in the world. The cloud delivers capacity on a previously unimaginable scale, enabling organisations to add or remove various components to their infrastructure quickly and as needed. The global reach of these four tech superpowers is speeding up 1. Image: AIG 2. #OnThisDay 1976: Britain was a world leader... when it came to teletext, at any rate. #OTD 1980: Michael Rodd explained why you were watching Tomorrow's World and how a microprocessor works, in that order. The first real 5G specification has officially been completed. #OTD 1982: Horizon looked at the evolution of computer graphics, from Steve Russell's original Spacewar! to the cutting edge 3D modelling te… IBM console from the NSA, 1971. #OTD 1986: Micro Live looked at how to produce professional quality computer graphics for as little as thirty grand. #CheapAsChips.

This Chinese inventor has created a invisibility blanket. How-it-works: the computer, 1971 and 1979 versions #BHRobinson. General Electric Corp, 1958. Why the Web Won't Be Nirvana. After two decades online, I'm perplexed. 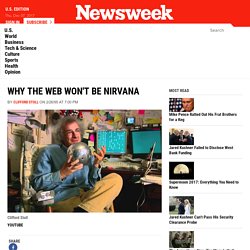 It's not that I haven't had a gas of a good time on the Internet. I've met great people and even caught a hacker or two. But today, I'm uneasy about this most trendy and oversold community. Visionaries see a future of telecommuting workers, interactive libraries and multimedia classrooms.

They speak of electronic town meetings and virtual communities. Baloney. Consider today's online world. Keep up with this story and more by subscribing now What the Internet hucksters won't tell you is tht the Internet is one big ocean of unedited data, without any pretense of completeness. #OTD 1985: Micro Live reviewed the Commodore Amiga, using a mysterious 'mouse' to interact with some 'windows'. Witchcraft!

1983: VHS v Betamax - Valerie Singleton brought news of the latest skirmishes in the video format war. Oh, and she also briefly transformed into a game… Raymond Baxter got the greatest gift of all in 1973. Peace on Earth? No, an "electronic game simulator". #ArchiveAdventCalendar. On this day 29 Nov 1975 the name Micro-soft (an amalgam of the words microcomputer and software) is first used in a letter from Bill Gates t… Didn't exist 15 years ago: @Apple □ @Facebook @Twitter @YouTube @Square @SpaceX @awscloud @AlibabaGroup @Tesla @Uber @Lyft @Airbnb… "had"? How refrigeration revolutionised global trade. Great article for 6th form on technology and trade. AI: Saudi robot #Sophia faces her existence. This is what the entire internet looked like in 1973.

Nearly half a century ago, the entire internet consisted of just 45 computers and could be mapped out on the back of a napkin. 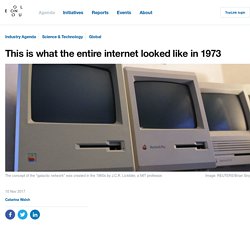 The squares in the picture below represent nodes, or gateways, which were the first-generation routers on ARPANET, the predecessor of the internet we know today. Image: ARPA/ARPAnet Completion Report On a map, the network starts to look a lot more impressive, showing that even then some of the linked computers were continents apart: The concept of the “galactic network” was created in the 1960s by J.C.R. Licklider, a MIT professor. It linked research institutions like MIT, Harvard, UCLA, Stanford and NASA. How the BBC News website has changed over the past 20 years.

Twenty years ago this week, when the BBC News website launched, there were fewer than eight million people online in the UK - there are now about 60 million. 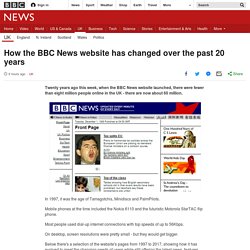 In 1997, it was the age of Tamagotchis, Minidiscs and PalmPilots. Mobile phones at the time included the Nokia 6110 and the futuristic Motorola StarTAC flip phone. Most people used dial-up internet connections with top speeds of up to 56Kbps. On desktop, screen resolutions were pretty small - but they would get bigger. Below there's a selection of the website's pages from 1997 to 2017, showing how it has evolved to meet the changing needs of users while still offering the latest news, features and analysis. 29 October 1969. The first-ever computer-to-computer link was established on ARPANET, the precursor to the Internet.

#OTD 1967: Tired of traipsing all over the country to attend important business meetings? Well, traipse no more; teleconferencing is here! ''This CD-ROM can hold more information than all the paper that's here below me''- Bill Gates,1994. #OTD 1986: Just how 16-bit was your 16-bit? Fred Harris explained, for the benefit of the 3 people who owned a 16-bit machine in 1986. What a difference 60 years makes. 1974: Nationwide, fearful that computers were beginning to get a reputation as scary, attempted to show that they could be fun. (Music: Machine Gun - Commodores) Google gets go-ahead to restore cell phone service in Puerto Rico with its balloons. Graphene could soon make your computer 1000 times faster.