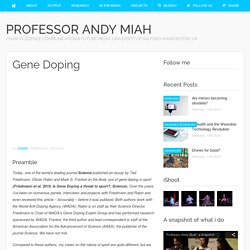 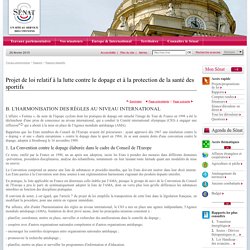 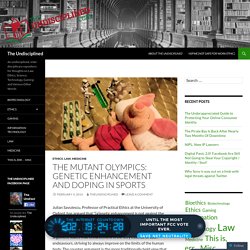 This argument states that enhancement is the very essence of such endeavours, striving to always improve on the limits of the human body. Genetic enhancement in sport: just another form of doping? Gene Doping: The Possibility of Human Genetic Enhancement in Sports. By Josh McMenemy In a feat that caused awe and controversy at the London Olympics, 16 year old Chinese swimmer, Ye Shiwen, came out of nowhere to win the Gold Medal in a World Record Breaking 400m swim performance. 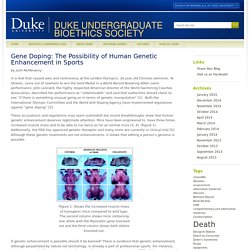 John Leonard, the highly respected American director of the World Swimming Coaches Association, described her performance as “unbelievable” and said that authorities should check to see “if there is something unusual going on in terms of genetic manipulation” [1]. Both the International Olympic Committee and the World Anti-Doping Agency have implemented regulations against “gene doping” [2]. Genetic Enhancement. Genetic Enhancement In general, genetic enhancement refers to the transfer of genetic material intended to modify nonpathological human traits. 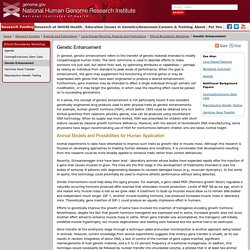 The term commonly is used to describe efforts to make someone not just well, but better than well, by optimizing attributes or capabilities -- perhaps by raising an individual from standard to peak levels of performance. When the goal is enhancement, the gene may supplement the functioning of normal genes or may be superseded with genes that have been engineered to produce a desired enhancement. Furthermore, gene insertion may be intended to affect a single individual through somatic cell modification, or it may target the gametes, in which case the resulting effect could be passed on to succeeding generations. In a sense, the concept of genetic enhancement is not particularly recent if one considers genetically engineered drug products used to alter physical traits as genetic enhancements.

Animal Models and Possibilities for Human Application. Twitter. Biology is Technology - DARPA is Back in the Game With A Big Vision and It Is H+ Biotechnological Inventions. Biotechnology. Biotechnology and life sciences contribute to the modernisation of European industry. 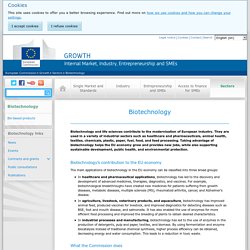 They are used in a variety of industrial sectors such as healthcare and pharmaceuticals, animal health, textiles, chemicals, plastic, paper, fuel, food, and feed processing. Taking advantage of biotechnology helps the EU economy grow and provides new jobs, while also supporting sustainable development, public health, and environmental protection. It's a scandal drug trial results are still being withheld. The Commons public accounts committee's report into the government's handling of the UK's £424m stockpile of the influenza drug Tamiflu, published last week, was damning. 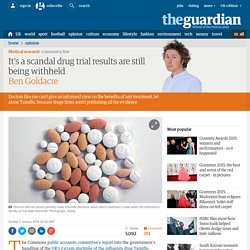 But starting from this narrow remit, the committee also stumbled – with palpable amazement – into a far wider problem. Nobody can give you a fully informed view on the benefits of any treatment, let alone Tamiflu, because the results of clinical trials are being routinely and legally withheld from doctors, researchers and patients. 2400 - Biotechnology. Revue Journal français de psychiatrie 2002/3, L'arrêt Perruche ou les problèmes posés par la biologie au droit. Home - Comment on Reproductive Ethics. Welcome. Synthetic analysis of the ECJ Case C-34/10 Oliver Brüstle v Greenpeace e.V. and its ethical consequences - C-FAM.

October 18th 2011, the Court of Justice of the European Union delivered an important judgment in the area of the protection of the human embryo in the case C-34/10 Oliver Brüstle v Greenpeace e.V. 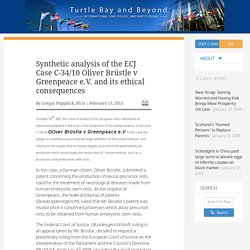 In this case the judges in Luxembourg précised the legal definition of the human embryo, and relying on the respect due to human dignity, excluded from patentability all processes which would imply the destruction of human embryo, such as a processes using embryonic stem cells. In this case, a German citizen, Oliver Brüstle, submitted a patent concerning the production of neural precursor cells used for the treatment of neurological diseases made from human embryonic stem cells. House of Lords - Stem Cell Research - Report. 7.1 Stem cell research and cloning are not purely domestic issues. 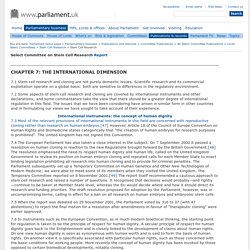 Scientific research and its commercial exploitation operate on a global basis: both are sensitive to differences in the regulatory environment. 7.2 Some aspects of stem cell research and cloning are covered by international instruments and other declarations; and some commentators take the view that there should be a greater degree of international regulation in this field. The issues that we have been considering have arisen in similar form in other countries and in formulating our views we have sought to take account of their experience.

International instruments: the concept of human dignity 7.4 The European Parliament has also taken a close interest in the subject. The need for international stem cell agreements : Article : Nature Biotechnology. Erawatch EGE - European Group on Ethics in Science and New Technologies. The EGE's main activity relates to advising the Commission on ethical questions relating to sciences and new technologies, either at the request of the Commission or on its own initiative. 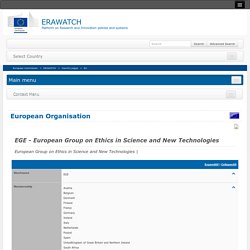 The EGE often responds to requests by the President of the Commission. Universal Declaration on Bioethics and Human Rights: UNESCO. The General Conference, Conscious of the unique capacity of human beings to reflect upon their own existence and on their environment, to perceive injustice, to avoid danger, to assume responsibility, to seek cooperation and to exhibit the moral sense that gives expression to ethical principles, Nothing to declare: UNESCO on ethics, human rights. UNESCO's declaration on bioethics and human rights is too weak to be of value, and could harm the world's poor if developing countries accept it, says Richard Ashcroft.

The 1948 Universal Declaration of Human Rights, created shortly after the bloodshed of the second world war finally ended, is a landmark in human civilisation. It provides a universally accepted and authoritative statement against which to judge the treatment by states, institutions, corporations and individuals of all people, anywhere in the world. Horizon 2020: EU funding of hESC research in the balance. Prof. Aurora Plomer Stem cell research has the potential to bring important advances in our understanding and treatment of crippling diseases such as Parkinson’s, diabetes, stroke and heart disease. It has also attracted significant investment in a number of countries in Europe, notably the UK and Germany, which have established themselves as global market leaders in stem cell therapy and technology. The amount allocated to stem cell research under previous EU programmes has formed a relatively small portion of the overall budget but played a vital role in facilitating collaborations amongst EU researchers which would not have been possible through national funding alone.