Resurrecting the Extinct Frog with a Stomach for a Womb 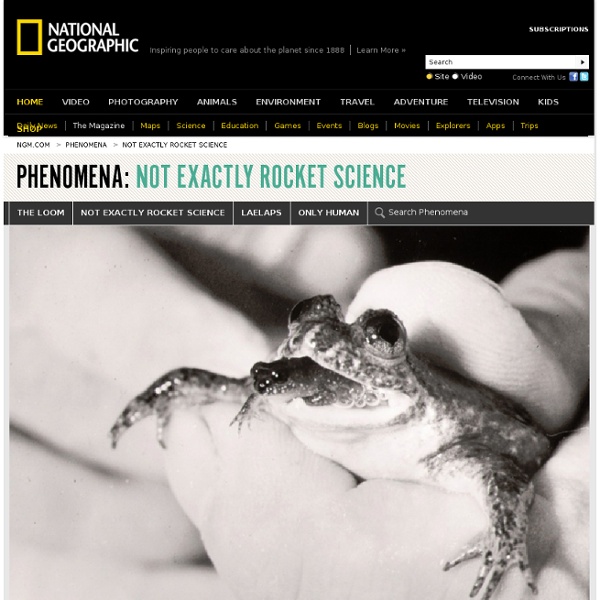 Two years ago, Mike Archer from the University of New South Wales looked down a microscope and saw that a single fertilised frog egg had divided in two. Then, it did it again. And again. Eventually, the egg produced an embryo containing hundreds of cells. “There were a lot of hi-fives going around the laboratory,” says Archer. This might seem like an over-reaction. The fact that it started to grow into an embryo was a big deal. Archer’s goal is simple: To bring the extinct gastric brooding frog back from oblivion and, in doing so, provide hope for the hundreds of other frogs that are heading that way. Frozen southern gastric brooding frog. Stomach for a womb The southern gastric brooding frog (Rheobatrachus silus) was discovered in 1972 in the mountains of Queensland, Australia. Simply put, the mother frog converts her stomachs into a womb. When news broke about this weird strategy, other scientists were incredulous. They didn’t have long. Then, good news! Cloning Lazarus Is it worth it?

Strange phallus-shaped creature provides crucial missing link Jeudi, 14 Mars 2013 08:49 News Two individuals of Harrimania planktophilus, a modern enteropneust (harrimaniid) worm. Proboscis to the left. Christopher Cameron of the University of Montreal's Department of Biological Sciences and his colleagues have unearthed a major scientific discovery - a strange phallus-shaped creature they found in Canada's Burgess Shale fossil beds, located in Yoho National Park. Their study, to be published online in the journal Nature on March 13, 2013, confirms Spartobranchus tenuis is a member of the acorn worms group which are seldom-seen animals that thrive today in the fine sands and mud of shallow and deeper waters. Since their discovery in the 19th-century, some of the biggest questions in hemichordate evolution have focused on the group's origins and the relationship between its two main branches: the enteropneusts and the pterobranchs, including graptolites. Undescribed species of a modern enteropneust (ptychoderid) worm.

Peregrine Falcon The Peregrine's breeding range includes land regions from the Arctic tundra to the tropics. It can be found nearly everywhere on Earth, except extreme polar regions, very high mountains, and most tropical rainforests; the only major ice-free landmass from which it is entirely absent is New Zealand. This makes it the world's most widespread raptor[11] and one of the most widely found bird species. In fact, the only land-based bird species found over a larger geographic area is not always naturally occurring but one widely introduced by humans, the Rock Pigeon, which in turn now supports many Peregrine populations as a prey species. While its diet consists almost exclusively of medium-sized birds, the Peregrine will occasionally hunt small mammals, small reptiles, or even insects. Description[edit] Taxonomy and systematics[edit] Subspecies[edit] Breeding ranges of the subspecies Adult of subspecies pealei or tundrius by its nest in Alaska F. p. macropus, Australia

Gyrfalcon The Gyrfalcon (/ˈdʒɜrfɔːlkən/ or /ˈdʒɜrfælkən/), also spelled gerfalcon—Falco rusticolus—is the largest of the falcon species. The Gyrfalcon breeds on Arctic coasts and the islands of North America, Europe, and Asia. It is mainly a resident there also, but some Gyrfalcons disperse more widely after the breeding season, or in winter. Individual vagrancy can take birds for long distances. The Gyrfalcon is dispersed throughout much of the Northern Hemisphere, with populations in Northern America, Greenland, and Northern Europe. Its plumage varies with location, with birds being coloured from all-white to dark brown. The bird's common name comes from French gerfaucon; in medieval Latin it is gyrofalco. Description[edit] The black color seems to be sex-linked and to occur mostly in females; it proved difficult for breeders to get males darker than the dark side of slate grey. Systematics and evolution[edit] Ecology[edit] Breeding[edit] The Gyrfalcon almost invariably nests on cliff faces.

Investors Seek Ways to Profit From Global Warming Investing in climate change used to mean putting money into efforts to stop global warming. Morgan Stanley (MS), Goldman Sachs (GS), and other firms took stakes in wind farms and tidal-energy projects, and set up carbon-trading desks. The appeal of cleantech has dimmed as efforts to curb greenhouse gas emissions have faltered: Venture capital and private equity investments fell 34 percent last year, to $5.8 billion, according to Bloomberg New Energy Finance. Photograph by Getty Images Now some investors are taking another approach. Working under the assumption that climate change is inevitable, they’re investing in businesses that will profit as the planet gets hotter. Photograph by Edith Polverni/Getty ImagesHotter temperatures Derivatives that help companies hedge against abnormal weather and natural catastrophes are drawing increased interest from some big players. Drought is helping spur business at Water Asset Management. Photograph by BloombergLonger droughts

Fennec fox The fennec fox or fennec (Vulpes zerda) is a small nocturnal fox found in the Sahara of North Africa. Its most distinctive feature is its unusually large ears, which also serve to dissipate heat. Its name comes from the Arabic word فنك (fanak), which means fox, and the species name zerda comes from the Greek word xeros which means dry, referring to the fox's habitat.[2] The fennec is the smallest species of canid in the world. Its coat, ears, and kidney functions have adapted to high-temperature, low-water, desert environments. In addition, its hearing is sensitive enough to hear prey moving underground. It mainly eats insects, small mammals, and birds. The fennec has a life span of up to 14 years in captivity. Description Taxonomy Behavior Social behavior An 1876 sketch of a pack of fennec foxes Information on fennec fox social behavior is mainly based on captive animals. Diet and hunting The species is able to live without free water, as its kidneys are adapted to restrict water loss.

Massive Louisiana sinkhole caused by oil industry just keeps on growing A sinkhole triggered in Louisiana by the fossil fuel industry grew to 12 acres over the weekend, and it appears that hundreds of displaced nearby residents will never be able to return to their homes. The sinkhole has been growing since it appeared in August. It was caused by a salt mining operation that sucked brine out from beneath the Assumption Parish marsh and piped it to nearby petrochemical facilities. Houston-based Texas Brine had apparently excavated too close to the surface, and officials are worried that a similar fate could befall another Texas Brine salt mining site nearby. Salt is used by the oil industry to stabilize the earth around drilled wells. Natural gas is belching out of the sinkhole and the waters that have filled it are covered with a rainbow slick of oil. From the Daily Comet: About 350 people living in the area have been under an evacuation order and many of them displaced for more than seven months, with no end in sight.

Euglossa bazinga Euglossa bazinga is a euglossine bee species found in Brazil. It is named after the catchphrase of the fictional character Dr. Sheldon Cooper from the television show The Big Bang Theory. Taxonomy and naming[edit] Euglossa bazinga is one of around 130 species currently identified within the orchid bee genus Euglossa.[2] E. bazinga had previously been misidentified as Euglossa ignita Smith, 1874. Distribution and habitat[edit] E. bazinga has been identified in the central and northern areas of Mato Grosso, Brazil. Morphology and identification[edit] E. bazinga is the smallest of the Euglossa species belonging to the subgenus Glossura, but has the longest tongue in proportion to its body size.[6] References[edit]

GSA press release - Hydro-Fracking: Fact vs. Fiction GSA Annual Meeting & Exposition, Charlotte, North Carolina, USA, 4–7 November 2012 Boulder, CO, USA –In communities across the U.S., people are hearing more and more about a controversial oil and gas extraction technique called hydraulic fracturing – aka, hydro-fracking. Controversies pivot on some basic questions: Can hydro-fracking contaminate domestic wells? Does it cause earthquakes? How can we know? What can be done about these things if they are true? "When people talk about contamination from hydraulic fracturing, for instance, they can mean a lot of different things," says hydrogeologist Harvey Cohen of S.S. On the other hand, when petroleum companies talk about risks to groundwater from hydro-fracking, they are often specifically referring to the process of injecting fluids into geologic units deep underground and fracturing the rock to free the oil and gas it contains, says Cohen. “That would be the 100 percent confident solution,” says Cohen of the tracers. www.geosociety.org

Catahoula Cur The Catahoula Cur is an American dog breed named after Catahoula Parish, in the state of Louisiana, in the United States. After becoming the state dog of Louisiana in 1979, its name was officially changed to Louisiana Catahoula Leopard Dog. The Catahoula is believed to be the first dog breed developed in North America[citation needed]. The breed is sometimes referred to as the "Catahoula Hound" or "Catahoula Leopard Hound", although it is not a true hound, but a cur. It is also called the "Catahoula Hog Dog", reflecting its traditional use in hunting wild boar. History[edit] The history of the Catahoula dog breed extends from prehistory through modern times, in the early 21st century. Origins[edit] The history of both the Catahoula lineage and the origins of the name "Catahoula" are both subject to uncertainty, however there are various theories (or hypotheses). There are two theories regarding the origin of the word 'Catahoula.' Bowie brothers[edit] Louisiana Governor Earl K. Recent[edit]

First documented case of child cured of HIV Researchers today described the first documented case of a child being cured of HIV. The landmark findings were announced at the 2013 Conference on Retroviruses and Opportunistic Infections in Atlanta, GA. Dr. Confirmation of the cure was made possible by a grant the Foundation awarded to Dr. "The child's pediatrician in Mississippi [Dr. According to Dr. The only other documented case of an HIV cure to date remains that of Timothy Brown, the so-called "Berlin patient." This new case points to the tantalizing possibility that different populations of HIV-positive people might be cured in different ways. "Given that this cure appears to have been achieved by antiretroviral therapy alone," said Dr. The Mississippi case also underscores the importance of identifying HIV-positive pregnant women, expanding access to treatment regimens than can prevent mother-to-child transmission, and of immediately putting infants on antiretroviral therapy in the event that they are born HIV positive.