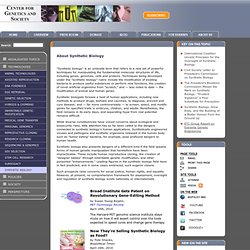 Techniques being developed under the "synthetic biology" rubric include the modification of existing bacteria to produce useful substances or perform new functions, the creation of novel artificial organisms from "scratch," and — less noted to date — the modification of animal and human genes. Synthetic biologists foresee a host of human applications, including new methods to produce drugs, biofuels and vaccines; to diagnose, prevent and cure disease; and — far more controversially — to screen, select, and modify genes for specified traits in embryos, children, and adults. Nonetheless, the field remains in its early days, and separating hype from real potential remains difficult.

About the Kavli Prize. “The Kavli Prizes recognize three scientific areas we believe are exceptionally exciting in the 21st Century and at the brink of remarkable discoveries – astrophysics, nanoscience and neuroscience. 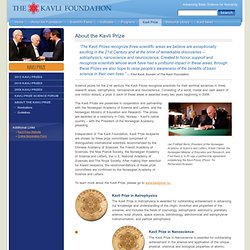 Created to honor, support and recognize scientists whose work have had a profound impact in these areas, through these Prizes we also hope to raise people's awareness of the benefits of basic science in their own lives. . ” — Fred Kavli, founder of The Kavli Foundation Science prizes for the 21st century, the Kavli Prizes recognize scientists for their seminal advances in three research areas: astrophysics, nanoscience and neuroscience.

Consisting of a scroll, medal and cash award of one million dollars, a prize in each of these areas is awarded every two years beginning in 2008. Jan Fridthjof Bernt, President of the Norwegian Academy of Science and Letters. To learn more about the Kavli Prize, please go to www.kavliprize.no. Canada Foundation for Innovation. MIT builds camera that can capture at the speed of light (video) 'Invisibility cloak' hides objects without using metamaterials. The quest to build a working “invisibility cloak” generally focuses on the use of metamaterials – artificially engineered materials with a negative refractive index that have already been used to render microscopic objects invisible in specific wavelengths of light. 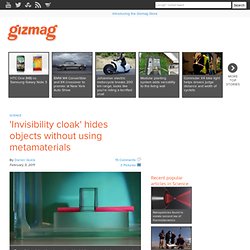 Now, using naturally occurring crystals rather than metamaterials, two research teams working independently have demonstrated technology that can cloak larger objects in the broad range of wavelengths visible to the human eye. Both teams, one from the Singapore-MIT Alliance for Research and Technology (SMART Centre) and the other comprised of researchers from the University of Birmingham, Imperial College, London and Technical University of Denmark, made the breakthrough using a natural crystal called calcite. This transparent mineral boasts an optical property known as birefringence, or double-refraction. Meanwhile, the SMART Centre team used a similar method. Metamaterials breakthrough could lead to the first wide-spectrum optical invisibility cloak. The Invisibility Cloak You've Been Waiting For.

Everyone from Harry Potter to working physicists are fascinated with cloaking devices. 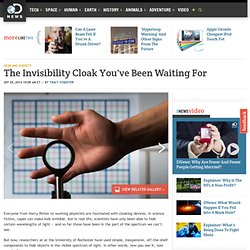 In science fiction, capes can make kids invisible, but in real life, scientists have only been able to hide certain wavelengths of light — and so far those have been in the part of the spectrum we can’t see. But now, researchers at at the University of Rochester have used simple, inexpensive, off-the-shelf components to hide objects in the visible spectrum of light. In other words, now you see it; now you don’t. When Will We Have Real Invisibility Cloaks? Such a system doesn’t work to fully hide you from the bad guys, but it could eliminate blind spots in vehicles or let surgeons see through their hands during delicate operations.

A 3D-printed running shoe that regenerates itself. Running shoes are becoming increasingly sophisticated – but this one may well top them all. 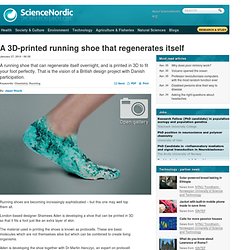 London-based designer Shamees Aden is developing a shoe that can be printed in 3D so that it fits a foot just like an extra layer of skin. The material used in printing the shoes is known as protocells. These are basic molecules which are not themselves alive but which can be combined to create living organisms. Aden is developing the shoe together with Dr Martin Hanczyc, an expert on protocell technology from the University of Southern Denmark. By mixing various types of these ’dead’ molecules, they will try to create materials that can be programmed to behave in different ways, depending on pressure, light and heat, thus providing extra cushioning if needed. 3G vs. 4G Wireless - What is the Difference. Alsos Digital Library for Nuclear Issues. NuclearPathways.org Home Page.