SCOTUS sets hearing on Obamacare for week after election. First, the coronavirus pandemic took their jobs. Then, it wiped out their health insurance. What Trump's drug policies have meant for America's opioid epidemic. But on the verge of his final first-term State of the Union speech, a closer look at the numbers, published Thursday by the Centers for Disease Control and Prevention, reveal that despite the overall decline in overdose deaths, those numbers have still not returned to 2016 levels. 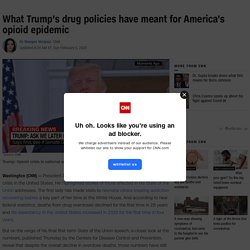 And under Trump, other aspects of addiction and overdose deaths have evolved, as well. Under Trump, the federal government has undertaken a series of efforts to combat addiction and overdose deaths from opioids -- setting restrictions on opioid prescriptions, calling for a public health emergency, launching ad campaigns aimed at young people who might abuse the drugs, expanding access to the opioid overdose antidote known as Naloxone and pushing for China to cease illicit fentanyl production and exporting, among other efforts. Trump administration officials held a White House press briefing Thursday to announce the overdose death decline. From the campaign to the White House An emerging issue Sens. The NHS has a plan for taking on anti-vaxxers: ignore them.

Anti-vaxxers abound on Facebook, Twitter and YouTube, spewing misinformation about immunisation. At the same time, the US is facing its worst measles outbreak in nearly two decades, while in the UK, half a million children in the UK aren't vaccinated against the easily-spread, dangerous disease – giving us the distinction of being the third worst at such immunisations among wealthy countries, after the US and France. Faced with falling vaccination rates, health authorities are fighting back. NHS drugs bill could soar if Johnson signs Trump trade deal – report. NHS bosses fear hospitals and patients will have to pay billions more for drugs as the price of Boris Johnson striking a post-Brexit trade deal with Donald Trump. 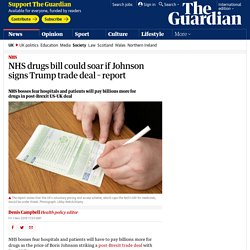 Brexit: Could US companies run NHS services after Brexit? Image copyright Getty Images Along with the pomp, protests and politics, President Trump's visit to the UK brought renewed debate about whether a post-Brexit trade deal between the two countries could involve opening up the NHS to US companies. 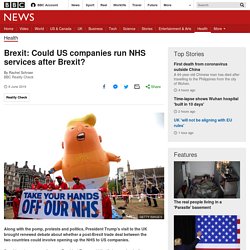 What must the government provide for the NHS to survive Brexit? Money it’s never been willing to give. It once said on the side of a bus that leaving the European Union would save the NHS millions of pounds. 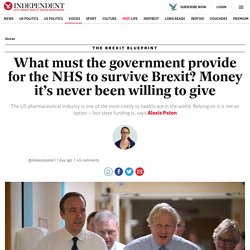 Today, that bus has a lot to answer for, because Brexit is going to cost the NHS a lot of money. Not just the loss of millions of euros of funding for biomedical research, or even the money that flowed back from the EU to the NHS in roundabout ways. Two key components of the NHS are threatened by Brexit: the regulation of pharmaceuticals in the UK, and EU staff. This government has promised little on how they will take concrete measures to ensure that these two vital aspects of healthcare are safeguarded once we’re out.

Previously, the UK sat at the heart of European pharmaceutical regulation, with the European Medicines Agency (EMA) housed in London. Download the new Independent Premium app Sharing the full story, not just the headlines. NHS winter crisis fears grow after thousands of EU staff quit. The impact of private healthcare on the NHS. Jessica Arnold’s comment piece (I implore people to stop using private health: it’s killing the NHS, 8 January) makes a number of unfounded assertions about the impact of private healthcare on the NHS, and fails to acknowledge that the NHS has always used private companies, as well as voluntary organisations and social enterprises, to deliver NHS services – something that is entirely consistent with its founding principles. 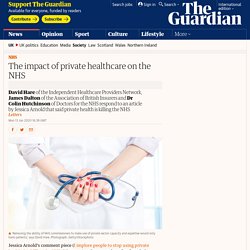 The workforce challenges faced by the NHS, which are shared by all major healthcare systems across the world, are not caused by the private health sector “poaching” staff but are a result of a range of complex factors, including an ageing workforce and pension policy. Moreover, removing the ability of NHS commissioners to make use of private sector capacity and expertise would only harm patients. The impact of private healthcare on the NHS. Patients forced to make appointments to boost profits, says Labour MP. Healthcare provider Virgin Care has been forcing patients to attend extra appointments to boost profits, says former employee and the Labour MP for Dewsbury, Paula Sherriff. 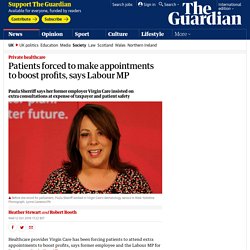 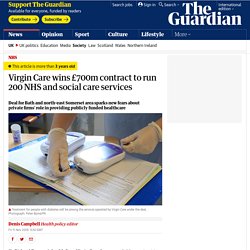 The contract, which was approved on Thursday, has sparked new fears about private health firms expanding their role in the provision of publicly funded health services. Virgin Care has been handed the contract by both Bath and North East Somerset NHS clinical commissioning group and Conservative-led Bath and North East Somerset council. It is worth £70m a year for seven years and the contract includes an option to extend it by another three years at the same price. It means that from 1 April Virgin Care will become the prime provider of a wide range of care for adults and children. 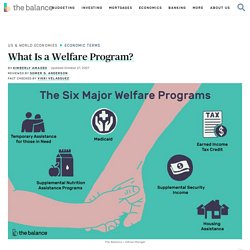 Recipients must prove their income falls below a target, which is some percentage of the federal poverty level. In 2019, the poverty level for a family of four was $25,750.1 There are six major U.S. welfare programs. They are the Temporary Assistance for Needy Families (TANF), Medicaid, Supplemental Nutrition Assistance Programs (SNAP or "food stamps"), Supplemental Security Income (SSI), Earned Income Tax Credit (EITC), and housing assistance. 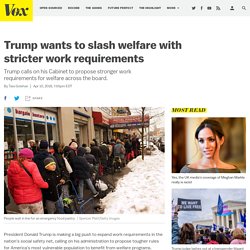 I implore people to stop using private healthcare: it’s killing the NHS. Imagine you had a job that you love doing – but year after year, the hours get longer, the size and complexity of the workload gets greater, the pay doesn’t really improve, and you see your colleagues leave without being replaced. 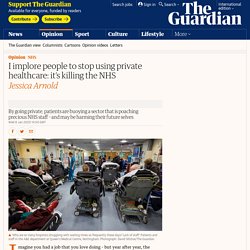 On top of that, you have to give up more of your life outside of work, while morale in your workplace sinks and mistakes creep in. This is life working in the NHS. And it doesn’t end there. Imagine you then see another job opportunity advertised. It has a controlled workload with sociable and predictable hours (because the NHS cannot control the volume or timing of patient demand), an easier mix of patients to care for (the private sector can “cherry-pick” the less needy patients), better pay (private hospitals do not have the overheads of running A&E departments), and less risk of verbal or physical abuse because these patients are happier. Society. Obamacare: Last Week Tonight with John Oliver (HBO) American Health Care Act: Last Week Tonight with John Oliver (HBO) Vaccines: Last Week Tonight with John Oliver (HBO)

(14) Donald Trump’s major 2020 gamble on health care. YouTube. (14) Bias In Medicine: Last Week Tonight with John Oliver (HBO) NHS drugs bill could soar if Johnson signs Trump trade deal – report. 'I'm being asked to take bloods while patients are on the floor' A staff nurse who works at a hospital in south-west England tells of her concerns of nurses being put to work in corridors. Safety fears as hospitals redeploy nurses to care for patients in corridors.

Hospitals are having to redeploy nurses from wards to look after queues of patients in corridors, in a growing trend that has raised concerns about patient safety. Many hospitals have become so overcrowded that they are being forced to tell nurses to spend part of their shift working as “corridor nurses” to look after patients who are waiting for a bed. Nurses, doctors and hospital bosses have all voiced unease about the practice, which has risen sharply in recent weeks as the NHS has struggled to cope with the extra pressures of winter. The disclosure of the rise in corridor nurses comes days after the NHS in England posted its worst-ever performance figures against the four-hour target for A&E care. They showed that last month almost 100,000 patients waited at least four hours and sometimes up to 12 or more on a trolley while hospital staff found them a bed on the ward appropriate for their condition. A&E staff 'despair' as NHS delays are at their worst ever level.

A&E staff feel “despair, anguish, anger and frustration” that they have too little time to provide proper care because they are so busy with the sheer number of patients seeking help, doctors and nurses leaders say. Intense workloads are leaving emergency department personnel exhausted, stressed and worried that they have missed clues about a patient’s condition because their units are so overwhelmed.

NHS leaders have spoken out in the wake of new official figures showing that delays for A&E care, and number of patients getting stuck on trolleys as they wait for a bed in hospital, are at their worst ever level. Experts said the NHS’s performance against key waiting time targets – for A&E care, access to GPs, cancer care and planned operations – is now at previously “unthinkable” depths. Opioids: Last Week Tonight with John Oliver (HBO) (14) Opioids II: Last Week Tonight with John Oliver (HBO)