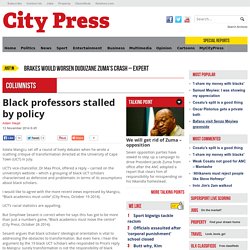 UCT’s vice-chancellor, Dr Max Price, offered a reply – carried on the university’s website – which a grouping of black UCT scholars characterised as defensive and problematic in terms of its assumptions about black scholars. I would like to agree with the more recent views expressed by Mangcu, “Black academics must unite” (City Press, October 19 2014). UCT’s racial statistics are appalling. But Simphiwe Sesanti is correct when he says this has got to be more than just a numbers game, “Black academics must move the centre” (City Press, October 26 2014).

Sesanti argues that black scholars’ ideological orientation is vital to addressing the obstacles to transformation. Academics Anonymous: an open letter to university 'leaders' 'For the record, if you’re not Alexander, Napoleon, Monty or the modern equivalent you’re not really a leader.' Photograph: Peter Macdiarmid/Getty Images Dear leaders, I address you as "leaders" because, for some reason (perhaps manager comes too close to rhyming with janitor for your liking), you've increasingly taken to styling yourselves in this way. 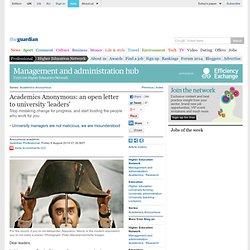 How grand. How imposing. Leaders are followed. New book on gender, family and academe shows how kids affect careers in higher education. Do babies matter to academic careers? 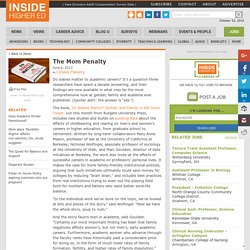 It’s a question three researchers have spent a decade answering, and their findings are now available in what may be the most comprehensive look at gender, family and academe ever published. (Spoiler alert: the answer is “yes.”) The book, Do Babies Matter? Gender and Family in the Ivory Tower, out this month from Rutgers University Press, includes new studies and builds on existing data about the effects of childbearing and rearing on men’s and women’s careers in higher education, from graduate school to retirement. Written by long-term collaborators Mary Anne Mason, professor of law at the University of California at Berkeley; Nicholas Wolfinger, associate professor of sociology at the University of Utah; and Marc Goulden, director of data initiatives at Berkeley, the work also looks at the effects of successful careers in academe on professors’ personal lives. 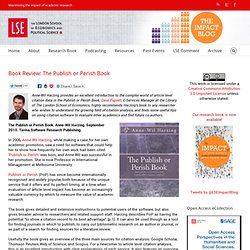 Dave Puplett, E-Services Manager at the Library of The London School of Economics, highly recommends Harzing’s book to any researcher who wishes to understand the growing field of citation analysis, and finds some useful tips on using citation software to evaluate other academics and find future co-authors. The Publish or Perish Book. Anne-Wil Harzing. September 2010. Tarma Software Research Publishing. In 2006, Anne-Wil Harzing, while making a case for her own academic promotion, saw a need for software that could help her to show how frequently her own work had been cited.

The book gives detailed and extensive instructions to potential users of the software, but also gives broader advice to researchers and related support staff. Her overall conclusions are clear and succinct, and highlight why this tool is of particular interest to social scientists. University of Pretoria. Department of Library Services: Open Scholarship Programme (openUP) Save Scholarly Ideas, Not the Publishing Industry (a rant) The scholarly publishing industry used to offer a service. 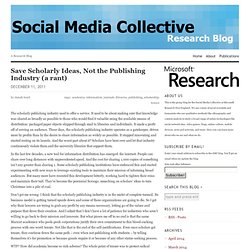 It used to be about making sure that knowledge was shared as broadly as possible to those who would find it valuable using the available means of distribution: packaged paper objects shipped through mail to libraries and individuals. It made a profit off of serving an audience. These days, the scholarly publishing industry operates as a gatekeeper, driven more by profits than by the desire to share information as widely as possible. It stopped innovating and started resting on its laurels. And the worst part about it? In the last few decades, a new tool for information distribution has emerged: the internet. Socialist Register. The Socialist Register was founded by Ralph Miliband and John Saville in 1964 as ‘an annual survey of movements and ideas’ from the standpoint of the independent new left. 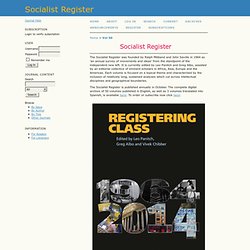 It is currently edited by Leo Panitch and Greg Albo, assisted by an editorial collective of eminent scholars in Africa, Asia, Europe and the Americas. Each volume is focused on a topical theme and characterized by the inclusion of relatively long, sustained analyses which cut across intellectual disciplines and geographical boundaries. The Socialist Register is published annually in October. The complete digital archive of 50 volumes published in English, as well as 3 volumes translated into Spanish, is available here. To order or subscribe now click here. Socialist Register 2014: Registering Class. The 50th volume of the Socialist Register is dedicated to the theme of ‘registering class’ in light of the spread and deepening of capitalist social relations around the globe. Table of Contents Articles. Ephemera. New Left Review.