Quadraphonic sound. 4 channels Quadraphonic label Quadraphonic (or Quadrophonic & sometimes Quadrasonic) sound – similar to what is now called 4.0 surround sound – uses four channels in which speakers are positioned at the four corners of the listening space, reproducing signals that are (wholly or in part) independent of one another. 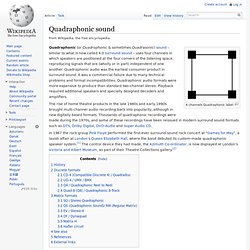 Quadraphonic audio was the earliest consumer product in surround sound. It was a commercial failure due to many technical problems and format incompatibilities. Quadraphonic audio formats were more expensive to produce than standard two-channel stereo. Playback required additional speakers and specially designed decoders and amplifiers. History[edit] A 4-channel reel-to-reel tape unit from the 1970s, one of the few ways to achieve true 4-channel sound at home The first medium for 4-channel sound was the quadraphonic reel-to-reel tape, standard in European electronic-music studios by 1953[3] and introduced to the American market by the Vanguard Recording Society in June 1969. 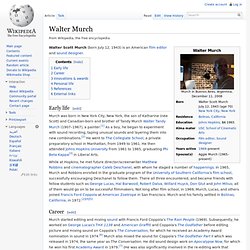 Early life[edit] Murch was born in New York City, New York, the son of Katharine (née Scott) and Canadian-born and brother of Tandy Murch Walter Tandy Murch (1907–1967), a painter.[1] As a boy, he began to experiment with sound recording, taping unusual sounds and layering them into new combinations.[2] He went to The Collegiate School, a private preparatory school in Manhattan, from 1949 to 1961. He then attended Johns Hopkins University from 1961 to 1965, graduating Phi Beta Kappa[3] in Liberal Arts. Career[edit] Murch started editing and mixing sound with Francis Ford Coppola's The Rain People (1969). Unlike most film editors today, Murch works standing up, comparing the process of film editing to "conducting, brain surgery and short-order cooking", since all conductors, cooks and surgeons stand when they work.

Michel Chion. Michel Chion born in 1947 in Creil, France, is a composer of experimental music. 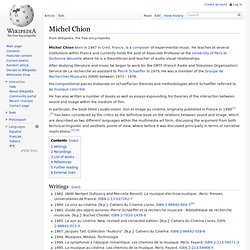 He teaches at several institutions within France and currently holds the post of Associate Professor at the University of Paris III: Sorbonne Nouvelle where he is a theoretician and teacher of audio-visual relationships. After studying literature and music he began to work for the ORTF (French Radio and Television Organisation) Service de La recherche as assistant to Pierre Schaeffer in 1970. He was a member of the Groupe de Recherches Musicales (GRM) between 1971 - 1976.

Semiotics. Semiotics frequently is seen as having important anthropological dimensions; for example, Umberto Eco proposes that every cultural phenomenon may be studied as communication.[2] Some semioticians focus on the logical dimensions of the science, however. 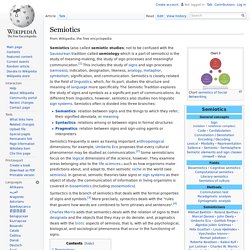 They examine areas belonging also to the life sciences – such as how organisms make predictions about, and adapt to, their semiotic niche in the world (see semiosis). In general, semiotic theories take signs or sign systems as their object of study: the communication of information in living organisms is covered in biosemiotics (including zoosemiotics). Syntactics is the branch of semiotics that deals with the formal properties of signs and symbols.[3] More precisely, syntactics deals with the "rules that govern how words are combined to form phrases and sentences".[4] Terminology[edit] Ferdinand de Saussure, however, founded his semiotics, which he called semiology, in the social sciences:

Ideas in Sound Design: Semiotics and Language – Part 2. Cross-posting from my personal blog. 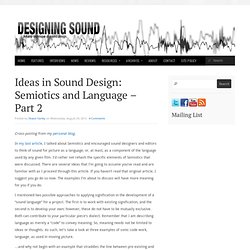 In my last article, I talked about Semiotics and encouraged sound designers and editors to think of sound for picture as a language; or, at least, as a component of the language used by any given film. I’d rather not rehash the specific elements of Semiotics that were discussed. There are several ideas that I’m going to assume you’ve read and are familiar with as I proceed through this article. If you haven’t read that original article, I suggest you go do so now. The examples I’m about to discuss will have more meaning for you if you do. I mentioned two possible approaches to applying signification in the development of a “sound language” for a project. …and why not begin with an example that straddles the line between pre-existing and invented signification. Here we have Commander Tigh reacting to a sonic element that is simultaneously music and sound design.

This particular example is interesting, because it is an overt signifier. Diego Stocco – From Sound Design To Soundtracks. Diego Stocco is a name familiar to many Synthtopia readers. 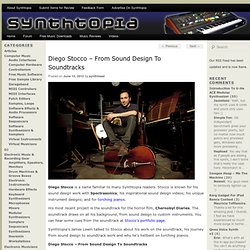 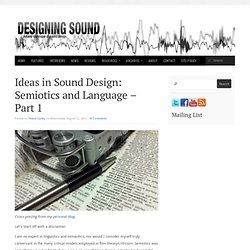 Let’s start off with a disclaimer. I am no expert in linguistics and semantics, nor would I consider myself truly conversant in the many critical models employed in film theory/criticism. Semiotics was something waved in front of my eyes a couple of times during undergrad (where I did not studio audio or film, by the way), then explored in much greater depth during a course in my graduate program. For this article, I’ll be falling back to some of the general concepts of Semiotics. They are the points that have truly stuck with me over the years, and they easily apply to many facets of media. So, what the heck is Semiotics? This article will be focusing primarily on some of the concepts developed by Ferdinand de Saussure. At the most basic level, you could think of the signifier as the pointer file in your project that tells your DAW which audio file to play.

You might argue that a chair is a physical object, but “chair” is really more of a category. Ideas in Sound Design: Deprivation and Barriers – Part 2. Cross-posting from my personal blog. 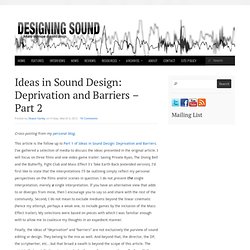 This article is the follow up to Part 1 of Ideas in Sound Design: Deprivation and Barriers. I’ve gathered a selection of media to discuss the ideas presented in the original article. I will focus on three films and one video game trailer: Saving Private Ryan, The Diving Bell and the Butterfly, Fight Club and Mass Effect 3′s Take Earth Back (extended version). I’d first like to state that the interpretations I’ll be outlining simply reflect my personal perspectives on the films and/or scenes in question. I do not present the single interpretation, merely a single interpretation. Finally, the ideas of “deprivation” and “barriers” are not exclusively the purview of sound editing or design. Saving Private Ryan: Gary Rydstrom, Richard Hymns, Andy Nelson, Gary Summers Let’s begin with the storming of Omaha Beach scene from Saving Private Ryan (Spielberg, 1998). The scene opens with, and sustains, close-up shots of the soldiers in their landing boats. 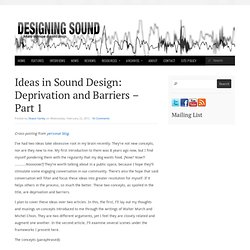 I’ve had two ideas take obsessive root in my brain recently. They’re not new concepts, nor are they new to me. My first introduction to them was 8 years ago now, but I find myself pondering them with the regularity that my dog wants food.