Tutorial: 9 Tips to Improve Editing and Mastering Sound Effects. Field recording good audio is only one of three steps to creating a great sound effect. 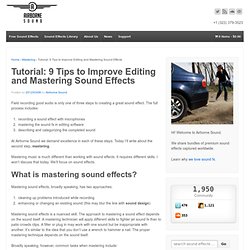 The full process includes: recording a sound effect with microphonesmastering the sound fx in editing softwaredescribing and categorizing the completed sound At Airborne Sound we demand excellence in each of these steps. Today I’ll write about the second step, mastering. 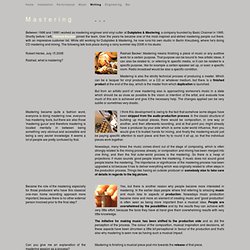 Your workspace here is highly ergonomic and it radiates a certain very inviting energy. If I come in here I see there is racks in a semicircle with all this equipment, and it feels like its a very comfortable working space and all functions are nicely spread out. Is the missing haptic part a reason for your difficulties with ... ? ...with integrating plug-ins? I would say so, its hard for me to address them nicely, there are controllers out there which cost of lot a of money and which are probably fit for addressing plug-ins in a decisive manner but another problem with plug-ins is they always give you something to look at, they always give you visual info and you always have to look when working with them.

With my hardware I don't ever have to look at it. I am fine with seeing a little bit of gain reduction, some blinking lights. Interface. CD/Audio Mastering - Recording Studio Tips - Compression. I have experimented with Cakewalk but I don't think I fully understand compressor and EQ settings. 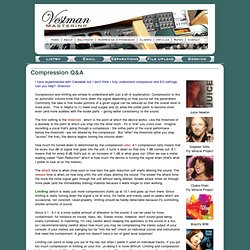 Can you help? -Shannon Compression and limiting are simple to understand with just a bit of explaination. Compression is like an automatic volume knob that turns down the signal depending on how you've set the parameters. Commonly the idea is that louder portions of a given signal can be reduced so that the overall level is more even. The first setting is the threshold - which is the point at which the device works.

How much it's turned down is determined by the compression ratio. 4:1 compression ratio means that for every four dB of signal that goes into the unit, it turns it down so that only 1 dB comes out. 8:1 means that for every 8 dB that's put in, an increase of 1 dB is what goes out. The attack time is when (how soon or how fast) the gain reduction unit starts altering the sound. Audio Mastering In Your Computer. Many home recordists hope to perfect their productions by doing their own mastering on their studio computer. 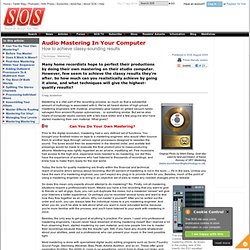 However, few seem to achieve the classy results they're after. So how much can you realistically achieve by going it alone, and what techniques will give the highest-quality results? Craig Anderton. Preparing Your Music For Mastering. If you're looking to release a record that you've produced at home, it's a good idea to have the product professionally mastered, but it's not always obvious if a mix is adequately finished. 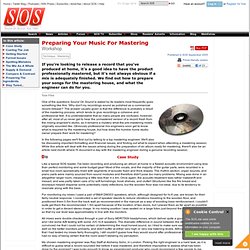 We find out how to prepare your songs for the mastering house, and what the engineer can do for you. Tom Flint One of the questions Sound On Sound is asked by its readers most frequently goes something like this: 'Why don't my recordings sound as polished as a commercial record release? ' The answer usually given is that the difference is probably a result of the mastering process, which tends to give recordings a cohesive and professional feel. It is understandable that so many people are confused, however; after all, most of us never get to hear the unmastered version of a record fresh from the mixing engineer's studio, so it remains a mystery what the pre-mastering mixes originally sounded like. In the following pages we'll find out by talking to a top mastering engineer. Spotting Mistakes. Mastering Engineer - Matt Colton. Matt Colton, mastering engineer at London’s legendary AIR Studios, talks about the highs and lows of the job, outlines the skills required to become a world-class mastering engineer and sings the praises of a good lunch. 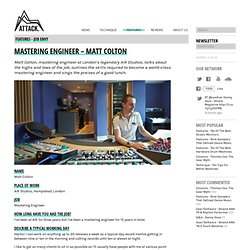 Name Matt Colton Place of work AIR Studios, Hampstead, London Job. 20 Tips On Home Mastering. Now that so many musicians are completing the entire album-making process in their own studios, mastering is becoming an increasingly important skill. 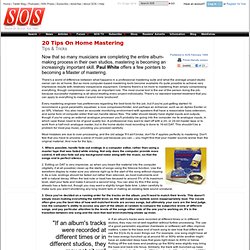 Paul White offers a few pointers to becoming a Master of mastering. There's a world of difference between what happens in a professional mastering suite and what the average project studio owner can do at home. But as more computer-based mastering tools become available it's quite possible to achieve very impressive results with relatively inexpensive equipment. Certainly there's a lot more to mastering than simply compressing everything, though compression can play an important role. The most crucial tool is the ear of the person doing the job, because successful mastering is all about treating every project individually. Most mistakes are due to over-processing, and the old adage 'If it ain't broke, don't fix it' applies perfectly to mastering. 1. 2.