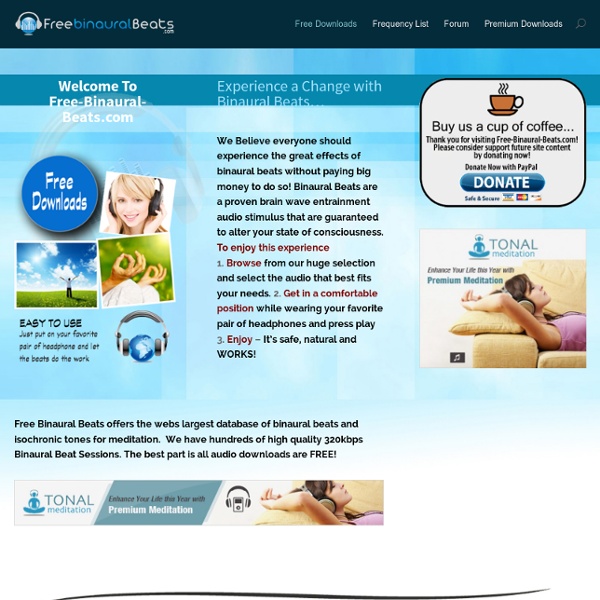 How to Get “High” Without Drugs Binaural Beats are the products of two different sounds in harmony; they produce sounds that are only heard by the brain. The effect of this can be quite calming, relaxing and meditative. There are many different types of binaural beats that can suit your specific mood and also help with various ailments. Many people have said that if you are someone who generally has trouble with quieting the mind and meditation (like me), then binaural beats are likely to have a greater affect on your overall ability to reach the higher frequency states. Furthermore, studies have shown that these beats can assist with mental clarity, more focused thought patterns, increased energy, heightened creativity and many more positive changes for your overall wellbeing. Physicist Heinrich Wilhem Dove first discovered binaural beats in 1839.

Pineal Gland's Third Eye: One Of The Biggest Cover-ups in Human History The pineal gland (also called the pineal body, epiphysis cerebri, epiphysis or the “third eye”) is a small endocrine gland in the vertebrate brain. It produces the serotonin derivative melatonin, a hormone that affects the modulation of wake/sleep patterns and seasonal functions. Its shape resembles a tiny pine cone (hence its name), and it is located near the center of the brain, between the two hemispheres, tucked in a groove where the two rounded thalamic bodies join. Every human being’s Pineal Gland or the Third Eye can be activated to spiritual world frequencies and enables you to have the sense of all knowing, godlike euphoria and oneness all around you. A pineal gland once tuned into to proper frequencies with help of meditation, yoga or various esoteric, occult methods, enables a person to travel into other dimensions, popularly known as astral travel or astral projection or remote viewing. The Secret : What they don’t want you to KNOW!

Over 1,000 Mayan Codices Discovered in Museum Basement – Mayan Prophecy to be Fulfilled on December 21 2012 Last updated on October 30, 2011 at 10:10 pm EDT by in5d Alternative News * Visit in5D Connection where you can find your soul mate or join one of our amazing groups. EVERYONE is welcome! Over 1,000 Mayan codices were discovered in the basement of a Los Angeles museum, presumably owned by Randolph Hunt and donated to the museum. Two other codices were found by the Maya Itza Council and have been analyzed for the past 10 years. Top 8 Supplements to Boost Your Pineal Gland Function By: Anna Hunt, Staff Writer, Waking Times, Guest Contributor The pineal gland, an endocrine gland located in the brain, is said to be the seat of the soul. Also referred to as the Third Eye, this small gland is believed to be involved in reaching higher levels of consciousness, acting as a gateway to dimensions beyond our brain-created reality. To learn more about the pineal gland, see: What is the Pineal Gland? For the people that seek to fully activate their spiritual potential and tap into the power of the pineal gland, one must begin by strengthening its function though detoxification and proper nutrition.

2012 and the Pyramids At Giza 2012 and the Pyramids at Giza… by Charles Marcello I happen to be one of those people who believes nothing is going to happen in 2012. However, in order to prove that to myself, I have been studying this issue for about four years now. While studying ancient cultures I noticed that each of them had a fascination with the planets.

Binaural Beats - How To Be Smarter This is part one of a two-part series about binaural beats, brainwave entrainment, intelligence and ways to become smarter through scientifically proven methods of monaural beats, binaural beats and isochronic tones. Can You Use Binaural Beats to Increase Your Intelligence? There are some people who are super smart and other people who are really dumb. This is a phenomenon that I have observed since I started with primary-school. I am pretty sure that you have noticed this phenomenon too, so let me ask you: do you think that intelligence is something that you are born with? In this article I am going to try to prove to you that intelligence can be learned (through binaural beats) so don’t click away just yet.

Dream argument The dream argument is the postulation that the act of dreaming provides preliminary evidence that the senses we trust to distinguish reality from illusion should not be fully trusted, and therefore any state that is dependent on our senses should at the very least be carefully examined and rigorously tested to determine whether it is in fact reality. Synopsis[edit] In Eastern philosophy and especially Chinese philosophy, this type of argument is well known as "Zhuangzi dreamed he was a butterfly" (莊周夢蝶 Zhuāngzhōu mèng dié): One night, Zhuangzi (369 BC) dreamed that he was a carefree butterfly, flying happily. After he woke up, he wondered how he could determine whether he was Zhuangzi who had just finished dreaming he was a butterfly, or a butterfly who had just started dreaming he was Zhuangzi. This was a metaphor for what he referred to as a "great dream": He who dreams of drinking wine may weep when morning comes; he who dreams of weeping may in the morning go off to hunt.

The Language of God “Philosophy [nature] is written in that great book which ever is before our eyes — I mean the universe — but we cannot understand it if we do not first learn the language and grasp the symbols in which it is written. The book is written in mathematical language, and the symbols are triangles, circles and other geometrical figures, without whose help it is impossible to comprehend a single word of it; without which one wanders in vain through a dark labyrinth.” — Galileo Galilei Blessed is the man who finds wisdom, the man who gains understanding, for she is more profitable than silver and yields better returns than gold. She is more precious than rubies; nothing you desire can compare with her.

Binaural Beats From HealingBeats.com : HealingBeats.com <div style="padding:5px; font-size:80%; width:300px; background-color:white; margin-left:auto; margin-right:auto; border:1px dashed gray;"> Internet Archive's<!--'--> in-browser audio player requires JavaScript to be enabled. It appears your browser does not have it turned on. Please see your browser settings for this feature. </div> Free Binaural Beat's from HealingBeats.com For more information on binaural beats and how to learn how to make your own visit the website at: Are Birthmarks Connected to Your Past Life? A boy born with a mark said to be left by his violent death in a past life, included in research at the University of Virginia. (Screenshot/YouTube) A boy in Thailand with a birthmark on his neck that mirrors the mark made on his grandmother’s neck before she died, shortly before his birth. (Screenshot/YouTube) An old woman died in Thailand with the wish to reincarnate as a boy.

UFO Trace - Landing Mark Witnesses: Manuel Gordillo, Lopez Rivero. On Sunday, January 14, 1979, the investigators went to the site of the supposed landing with Francisco Lopez. After certain difficulties in finding the spot where his observation was made, they carefully studied the ground and observed the following: Everything you need to know about DMT Before you is a writing I found on a friendly site in5d, in which the author described a rather euphoric description of what DMT is about… Have a read, and let us know what you feel in the comments What can be said of DMT as an experience in relation to our own spiritual emptiness… Does it offer us answers? Do the short-acting tryptamines offer an analogy to the ecstasy of the partnership society before Eden became a memory? And if they do, then what can we say about it? What has impressed me repeatedly during my glimpses into the world of the hallucinogenic indoles, and what seems generally to have escaped comment, is the transformation of narrative and language. The experience that engulfs one’s entire being as one slips beneath the surface of the DMT ecstasy feels like the penetration of a physical membrane.