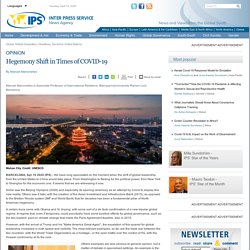 Credit: UNESCO - We have long speculated on the moment when the shift of global leadership from the United States to China would take place. Some saw the Beijing Olympics (2008) and especially its opening ceremony as an attempt by China to display this new reality. A certain truce came with Obama and Xi Jinping, with some sort of a de facto confirmation of a new bipolar global regime. However, with the arrival of Trump and his “Make America Great Again”, the escalation of this quarrel for global leadership increased in both speed and visibility. Manuel Manonelles. Others examples are less obvious to general opinion, but a matter of debate in specialised settings.

They did so by appointing a new high political-profile ambassador in November last year. The 21st was Taiwan and the United States. The End of Egyptian Cotton. Some years before, a Frenchman named Louis Alexis Jumel had come across a neglected cotton plant in a Cairo garden. 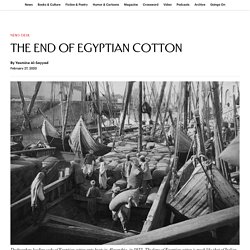 He marvelled at how well the plant took to the climate, how its long fibres spun easily into soft yarn. He became convinced that large-scale cultivation was possible and persuaded Muhammad Ali Pasha, Egypt’s monarch, of his idea. Grown along the Nile, cotton thrived in Egypt, and Ali steadily turned the country into a cotton plantation. Between 1860 and 1865, Egypt’s farmers increased their cotton production from fifty million pounds to two hundred and fifty million pounds. Egypt’s production quickly eclipsed that of the U.S., and, by the end of the nineteenth century, Egypt derived ninety-three per cent of its revenue from cotton.

Lawrence Durrell, in “The Alexandria Quartet,” describes the “cotton kings” who lived in early-twentieth-century Alexandria, “the Hellenistic capital of the bankers and cotton-visionaries.” Greed is dead - TLS. The death of God, announced by Nietzsche in the 1880s, is still proving to be traumatic. 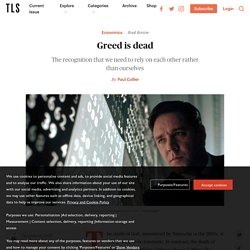 In contrast, the death of Economic Man will be a balm to the soul. When the economics profession conjured him up in the 1950s, our understanding of human evolution was more rudimentary than it is now. Economic Man was duly characterized not just as greedy, lazy and selfish, which to some extent we all are, but as only greedy, lazy and selfish. The applications of this travesty of the human condition have done immense damage. To take one instance, since Economic Man is incapable of being morally load-bearing, he cannot be trusted. Thankfully, we now know that Economic Man is a travesty. Christakis is a professor at Yale University in the departments of Ecology and Evolutionary Biology, Sociology, Medicine, Statistics and Data Science, and Biomedical Engineering. We are the only species that is morally load- bearing. But this process can sometimes go wrong – as it has done in our own societies.

Future - The lifespans of ancient civilisations. One way to look at the rise and fall of past civilisations is to compare their longevity. 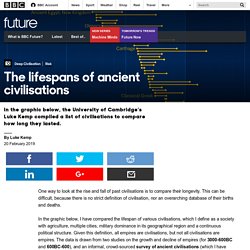 This can be difficult, because there is no strict definition of civilisation, nor an overarching database of their births and deaths. In the graphic below, I have compared the lifespan of various civilisations, which I define as a society with agriculture, multiple cities, military dominance in its geographical region and a continuous political structure. Given this definition, all empires are civilisations, but not all civilisations are empires. The data is drawn from two studies on the growth and decline of empires (for 3000-600BC and 600BC-600), and an informal, crowd-sourced survey of ancient civilisations (which I have amended). Read the full article about this graphic and the stresses behind the demise of civilisations. Pinch/zoom to enlarge (Credit: Nigel Hawtin) Civilisation [Duration in years] Ancient Egypt, Old Kingdom [505] Ancient Egypt, Middle Kingdom [405] Ancient Egypt, New Kingdom [501]